After a couple of weeks on motorcycles it was hard to believe that we were less than 80 miles from our goal. We planned on riding to the end of the road on the west side of the river and on the way back to New Orleans we planned on taking the ferry across to the east side.

There was a fair amount of  angst knowing that we had to do battle with the New Orleans drivers again to get to the Highway 90 bridge  and across the Mississippi River. We took our time and just tried to stay out of everyones way. Fortunately we only had a short ride on 90 until we exited to join Highway 23 to Venice.

I wasn’t ready for what we encountered heading down to Venice. It was mostly a four lane road which I didn’t expect. For the first several miles it was very industrial with refineries and chemical plants and miles of tanks. I guess I have seen too many episodes of Swamp People because that’s what I thought we would be riding through. I also thought that we would see the river once in a while or get a view of the backwaters off to the west. We drove down to Venice  between two levees. Sometimes a ship would go by on the Mississippi and you would be looking up at it. You must get used to having all that water and the ships higher than you if you live there but we live up by the bluff country of the Mississippi. We are used to looking down at the river.

It seemed  like a lot longer than 80 miles to Venice. There was very little to look at besides houses on stilts and levees. At one point there was a bridge that went up quite high so boats could pass. I had to stop for a second to take in the view and take a few pictures. There was life and water on the other side of those levees. 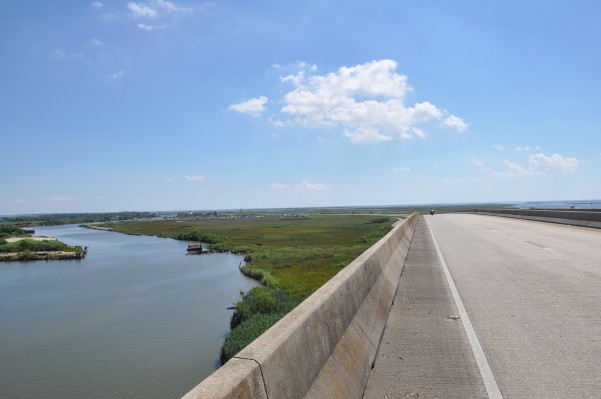 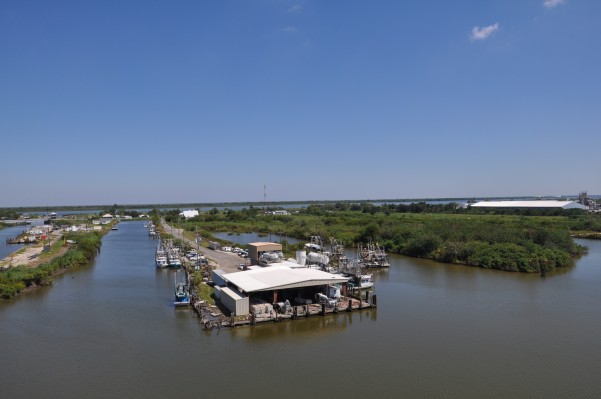 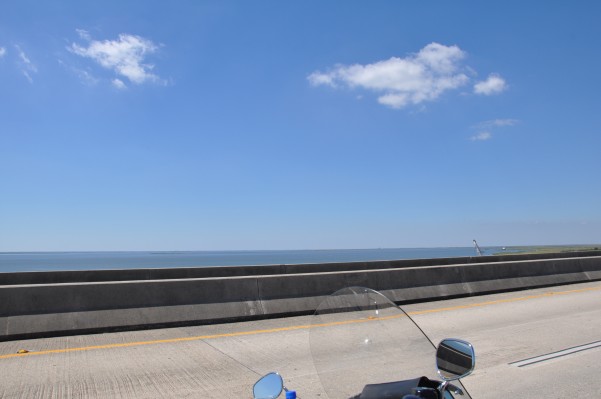 I found the levees all along the Mississippi to be oppressive. I know they are necessary but for the most part they are ugly.

As we got closer to Venice we came across three heliports. They all had large parking lots and several helicopters coming and going. I assumed that they were shuttling people and supplies to oil rigs out in the gulf. Seeing all the cars made you realize how many people made a living out at sea on oil platforms. 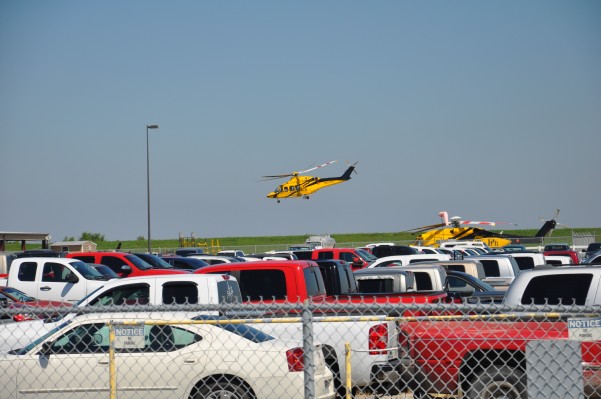 The town of Venice isn’t much. It is more of a widening of the road by a sprawling network of canals where the oil companies and fisherman park their ships/boats. We were looking for the perfect spot to call it an adventure and by chance I saw a sign about “now serving food”. We snooped around and turned a corner and there we were at the Cypress Cove Marina. This looked more like a recreational marina with a cafe. We took the end of the road pictures and had lunch.