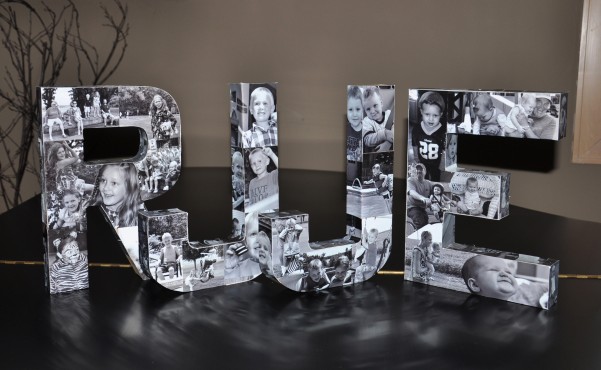 The project began with making files for each of the grand kids, and with all accounted for within my 2013 file, I opened iPhoto and began to make my way through the entire year, remembering all the fun times we had with them.

iPhoto automatically labels each import from the camera with a date, and files it in the iPhoto Library under Events.  It was easy to go through and choose cute pics of the grand kids and put them in the 2013 file.    Once they were all in the 2013 file, I divided them up under each of their names and there were 24-30 photos per kid. Next, I uploaded them to Walgreens, turned them into black and whites and had them printed.  It took a a few sessions of uploading and getting pictures printed as I didn’t know how many it would take to cover each of the letters.  You just have to get going and see what else you need to fill a space.  I did find that it was an advantage to have multiples of group pictures that I could use on more than one letter.  When you have a whole family in a photo you have smaller shots to work with in the small spaces. 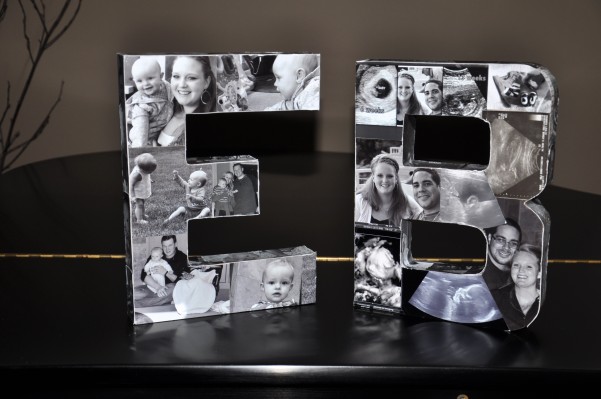 Below is a simple set up for the project.  All you need is:

YES! paste – mine was left over from a different project where the papers had to be flat and not wrinked up by a runny glue

lots of black and white photos to choose from

razor blade or utility knife that is sharp and clean

To Start;  Cut and glue the photos onto the top surface of the letter.  Have fun arranging them and don’t worry about being aligned to the edges.  Start with some of the larger images and fill in with smaller ones.  Once the top surface is dry, flip the letter over and use the razor blade or utility knife to trim around the edges on the plastic folding table, or use a cutting mat if you like.  (My table is dedicated to craft projects and it didn’t matter that it had cuts in it.)

The photos below are old family photos that I would scan and have reprinted instead of using the originals.  You don’t want to cut through great grandfathers head and not be able to have the original intact. 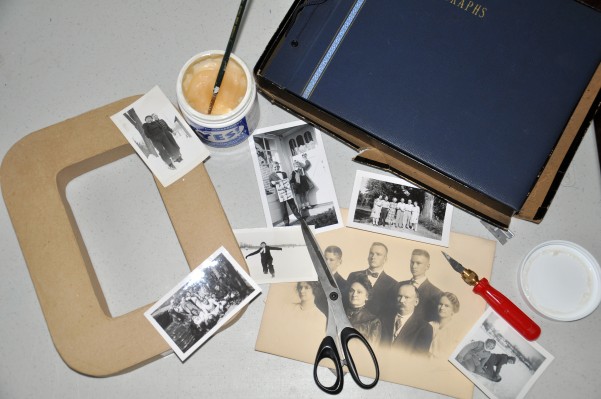 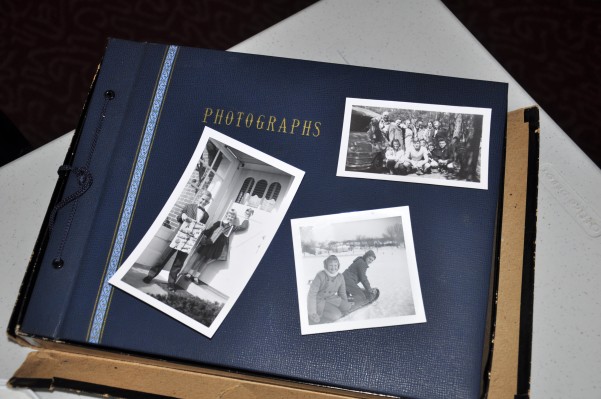 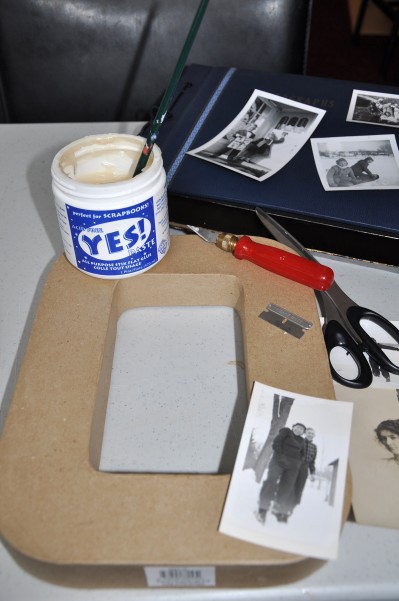 After the front is finished, tackle the inside and outside edges with smaller photos, let dry and trim.  That’s all there is to it!

Here are the kids opening their initials at Christmas. 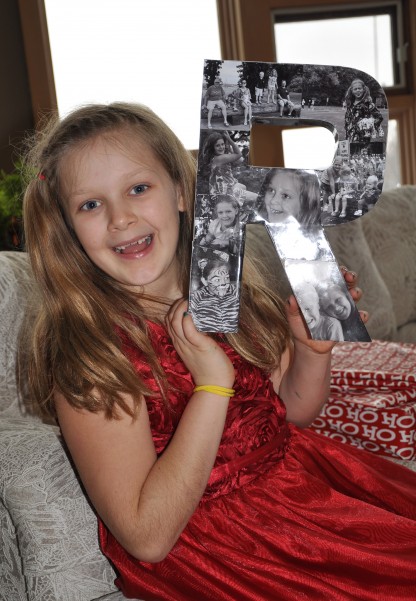 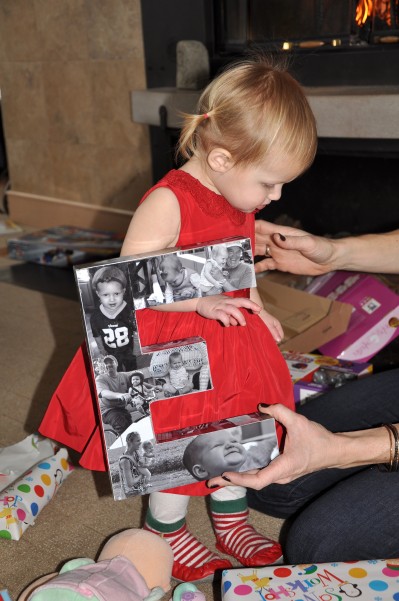 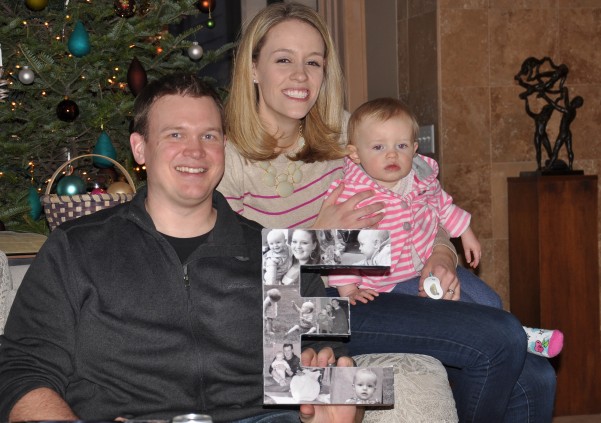 Here is Brayden’s letter with all of his ultrasounds.  He won’t make an appearance until late March. 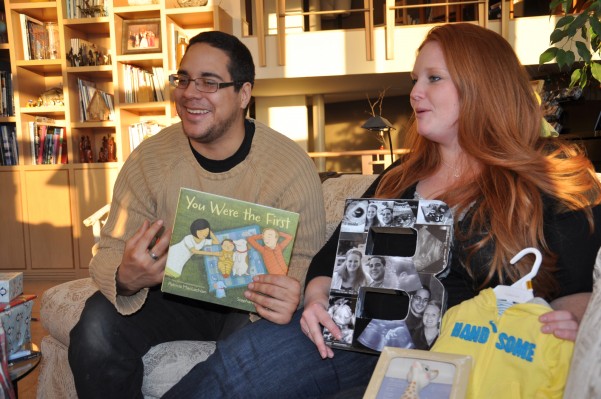 On the back of each letter we wrote a little note to each grandchild with the year.  They can put them in their rooms on a shelf or mom and dad can hang them.  I do have this crazy idea that I’d like to do this each year and spell out their whole names, giving them 14 + years of memory’s.  I don’t know that it will happen but right now I’m hopeful.

Think of all the birthday parties, Christmas’s, family dinners, and adventures from each year and all the fun stuff we did together and how putting them all in one place makes a beautiful snapshot of family life.  Just remember to take lots of pictures and load them into your photo library and by years end you’ll have more than enough to work with. 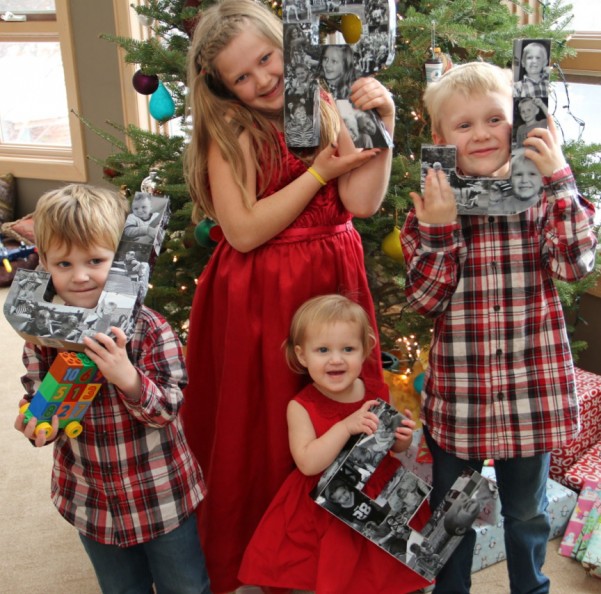 Doing the grand kids letters helped me be thankful for the past year and all the wonderful times we as a family has had together.  It was like counting blessings.

Want to count your blessings?  It’s never too late to start.