Texas is a big state. Traveling through west Texas can provide some challenges if you aren’t used to planning stops for services. Many of the small towns have no gas or restaurants available. Look at the prices on the sign at the service station.

We were traveling to Big Bend  National Park in west Texas. The distances between towns were a lot greater than I am used to. This trip was in the winter so brutal heat was not a factor. It was still in the 80’s and the air was dry. Before we left Del Rio, Texas I wanted to have hotel reservations. Many of the hotel/motels in the Big Bend area don’t have an online presence so I found the process of looking for a room cumbersome. For this trip the hotels online were full including the Chisos Basin Inn inside the park. 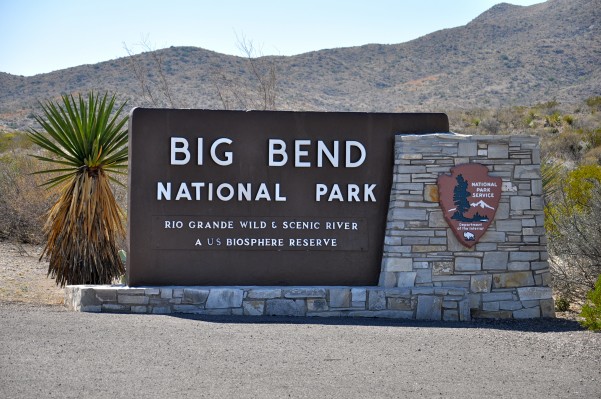 While looking for  a hotel in the Big Bend area I came across the Lajitas Resort and Spa which is several miles outside the park on the Rio Grande River. It looked great online but a little on the pricey side.  All we were looking for was a place to crash for one night. I tried to book a room online before we headed out to the west Texas area where cell service was limited at best. The problem I had was that every time I tried to book the room the price would jump sometimes by over a hundred dollars from what I was quoted on the initial query. I did get a hold of the front desk by cellphone and was told that they could not help me. I needed to talk to reservations. The reservation person wouldn’t be in for a couple of  hours but I was assured that they would call me right back. Feeling confident that at least there were rooms available in the area, we started the long drive to the park. We stopped in Del Rio, Texas for gas. The reservation person hadn’t called me back yet so I had my son book a room online so at least I had something when we got there. I rationalized that we haggle rate when we got there. I kept a screen shot of the lower rate that I was quoted just in case. When we checked in I found out that there was no haggling over price. The reservation person had gone home. At this point I was too tired to argue over price. It was many miles until there were any other options.

When we arrived in Lajitas we weren’t sure where the resort and spa was. There was a cluster of buildings on either side of the road. We saw a sign for the badlands hotel. Thinking this wasn’t the right spot we continued down the road. In about a half mile we found ourselves right on the Rio Grande river and about to enter the Big Bend Ranch State Park. We went back to the Badlands Hotel to admit defeat and ask for directions.

This was the Lajitas Resort and Spa. There just was no clear signage. We checked in and found our way to our room. The resort is interesting. There is an equestrian center and a golf course. Strangely enough most building and guest rooms are built in a U shape and the views were onto a courtyard. Keep in mind that this is beautiful scenery all around and the resort is built on a hill overlooking the Rio Grande. The layout and the design of the building did not take much advantage of the great views at all.

Our room was very much southwest style. It was nicely decorated, but it was apparent that the facility needed a little TLC. Our custom door had a crack big enough to see through. The faucet handles wiggled so bad you had to use two hands to hold them to turn them on or off. The shower was interesting. They installed a shower head in the ceiling. The only problem was that to turn the water on you had to stand in the range of the shower head so you would get hit with whatever temperature water came out first.  The room was significantly smaller than a typical Holiday Inn Express or LaQuinta room. There were a couple of other strange things. At the building where our room was there was a paved handicap ramp out of a gravel parking lot. Not that that was such a big deal but at the top of the ramp were about 4 stairs to our sidewalk. I’m not sure why they bothered with the ramp. The sidewalk was stone but the concrete grout was not smooth at all like it had never been finished and made pulling a rollerbag almost impossible. We noticed the same issue by the office and restaurant. There was a wooden board walk but the path between the buildings was so rough that it was hard to walk on.

Dining options were the restaurant or the bar at Lajitas. This was the only restaurant for many miles. We did eat on the patio and watched the sun go down. The view over the golf course and Rio Grande River was great. The service was efficient and the staff was very friendly. The food was much better than I expected based on the initial impression of the place. Dinner was definitely the best part of the stay at Lajitas. 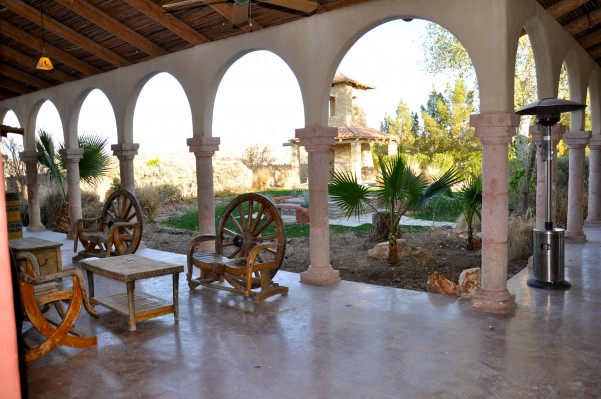 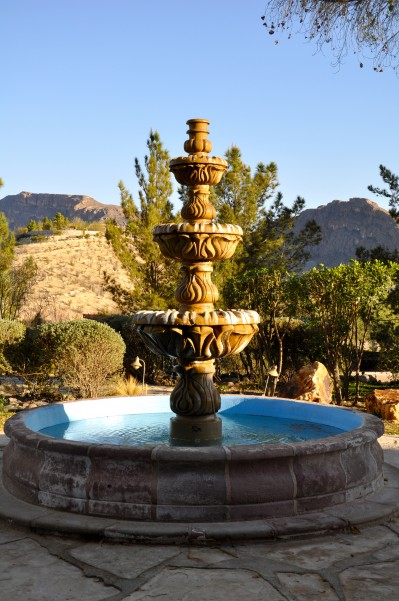 Overall this is a resort that has potential. The people are certainly nice and helpful. The scenery is beautiful. The structure of the place needs a little upgrade. Is it worth the sticker price of the rooms? Not in my opinion. If you get a significant discount and lower your expectations from the image formed by the website this is a good option.

Here is a slideshow of the the Big Bend National Park which is the main attraction once you leave the Lajitas area.