I’ve always wanted to create a kitchen garden close to the house, so I could enjoy it, water it, watch it grow and use it to cook.

Traditionally the kitchen garden was located close to the kitchen door and contained favorite veggies, fruits and herbs. In France they were called Potagers and had a formal design using geometric shapes. Back in the depression era, they were called Victory Gardens because they provided food for the family and cost next to nothing, so all resources could go to the war effort.  Some people call them Edible Gardens and plant their favorite fruits and vegies. Today, many people are kitchen gardening in an effort to be organic and pesticide free, as well as cost effective and convenient.  It’s nice to not pay for shipping and handling and you cannot get any fresher than your own backyard.

To me there is something about black dirt and green sprouts that is calming and brings a sense of renewal and rightness about life.  Our sunny spot is the unused space that’s just off our kitchen and deck.  It meets so many requirements of a kitchen garden that I’m surprised it took so long to see it’s purpose. Yup, it looks like a project, but think of the possibilities.  So I did.  The existing fence would be a plus, as we could easily run the rabbit fence along the black pool enclosure fence.  The black tub in the background is the upper retainer pond for the waterfall and pond below. 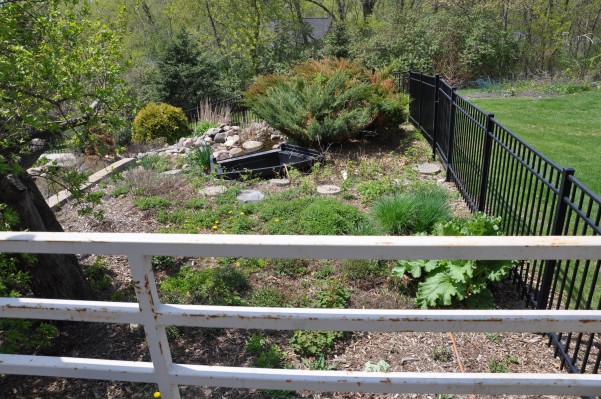 The existing space was a mess, with dandelions and lots of  weeds mixed into my attempts at ground-cover.   There were overgrown raspberries in the asparagus, more chives than anyone could ever use and a single marjoram plant had run rampant.  It’s roots were so dense that they formed an almost impenetrable mass.  At the end of last year I tried to dig them out without success and with the bonus of a sore back.  This spring was extra wet, so the pesky herb came up in large heavy clumps, but at least I was able to get the shovel into the plant.  (Hint:  grow marjoram only in pots to avoid it taking over any adjacent space.) 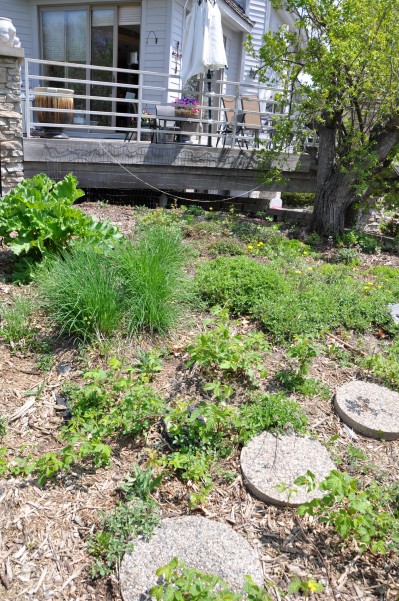 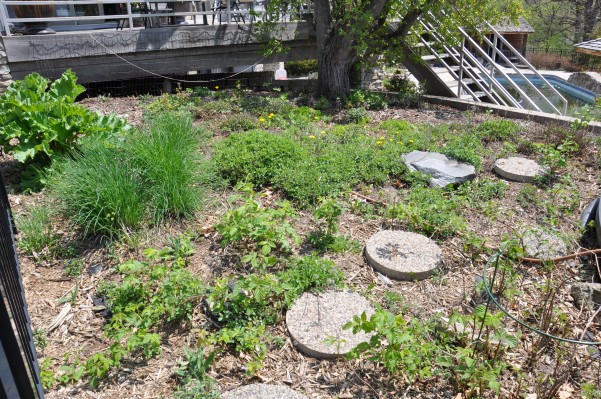 I dug wheelbarrow after wheelbarrow of weeds out digging down to get the roots.  The raspberries were repotted and given away to let the asparagus breath and get a good dose of sun.  Years ago I had made an attempt to grow veggies here but without a plan or sense of purpose.  This time was going to be different.  After the space was cleared, we installed a simple and inexpensive rabbit fence with metal stakes and zip ties.  Instead of an expensive gate, Dan came up with a simple solution using a section of decorative fence and rabbit fence that could be pulled out to allow walking into the garden. 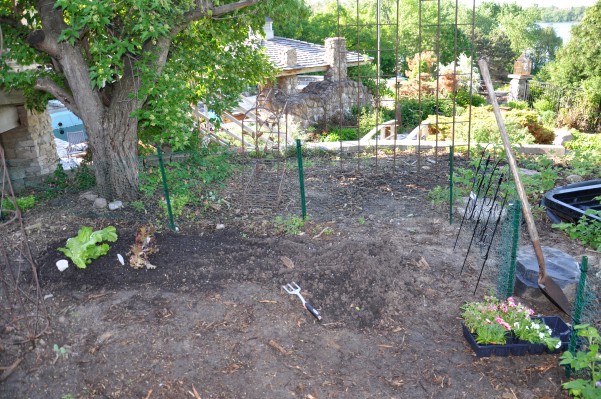 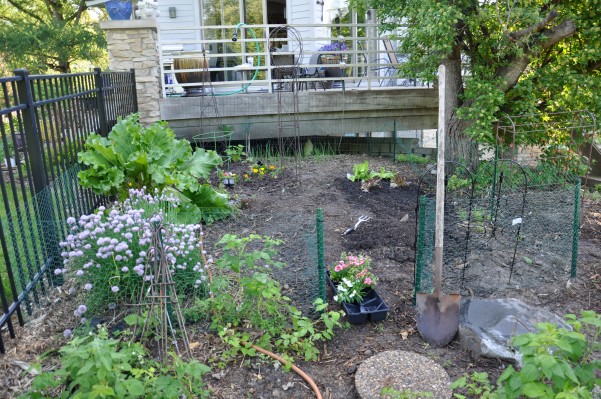 We had a couple of metal structures from previous gardening attempts that I pulled in for beans and peas to climb on. There was a sense that the garden was going to come together.  I knew I needed  black dirt and compost, so Dan made the trip to Home Depot to get me plenty of dirt and also some pavers we could set down along the center-line straight off the ‘gate’.   By this time, I’d purchased some lettuce, tomatoes and onions which went in along the deck to accompany the one remaining chive plant and rhubarb.

a fenced space with a ‘gate’

structures for plant to grow vertically

Climbing flowers for the fences

These first couple of weeks were hard work, but the space has been cleared and a few plants put in.  Next we’ll add dirt and a homemade trellis and watch to see the seed popping out of the earth.

If you’d like a little more inspiration in order to get excited about making your own kitchen garden, check out these links, but don’t get intimidated.  Some of these gardens are spectacular.  I’m starting small and manageable and you can too.  God willing there will be time to grow and experiment in the coming years as we head into retirement.