Fly, fish and float at Lake of the Ozarks 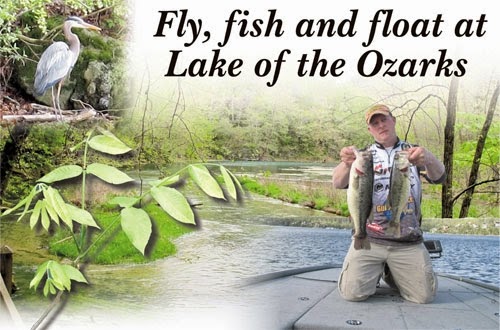 For years, friends have been talking about their boating, fishing and wine tasting trips to the beautiful resort area of the Lake of the Ozarks in central Missouri, and I wanted to go, too. Finally, the timing was right this spring and off I went.

For a visual introduction to the area, I met up with pilot Corey Leuwerke from Lake Aviation Center. The first thing I apprehensively said as I climbed aboard his small plane was I might get air sick. He reassuringly said that after a couple of initial bumps, the flight would be smooth and I should be fine. But remembering two previous experiences, I made sure my barf bag was handy as we flew over the 92-mile-long lake in his little Cessna to see how the lake snaked back and forth instead of being round like most lakes. Leuwerke pointed out the dam that produced the lake and circled around the intriguing castle ruins we later visited.
The ride was fun and smooth just as he said, and I loved it.
The lake came into being in the late 1920s when a utility company built the Bagnell Dam to produce power, turning the Osage River into the new Lake of the Ozarks, the second-largest manmade lake in Missouri and a popular tourist destination for boating, fishing, golf and other summer water activities. The picturesque area attracts over 5 million visitors annually.

Lake of the Ozarks State Park at one end of the water offers miles of hiking and biking trails, quiet camping and a couple of beaches. The other side of the lake is lined with homes ranging from small to over almost $2 million, plus condos and hotels. Many homes are vacation rentals for all the people flocking there.
Out on the water
Our morning pontoon boat ride on the Aquatic Trail in the serene state park side of the lake featured turkey vultures circling the sky, a few great blue herons flying in and out and a bald eagle sitting on a log at the water’s edge.
Our guide, Cindy Hall from the Missouri Department of Natural Resources, said these birds migrated south from Minnesota and other Midwestern states for the winter and would soon be heading back. The white dogwood bushes and dark pink redbud trees were in full spring bloom on the hillsides and created a lovely backdrop as she talked about the rock formations on the bluffs and the history of the area.

Later, we met boat captain Jack Uxa of Jack’s Guide Service, and he took us fishing for bass and crappies. A mist of water sprayed up on us, and the wind blew our hair as we sped to one of his favorite spots where the bass were making their beds and getting ready to spawn. Uxa, who was a guide at Gunflint Lodge in northern Minnesota for three summers, has equipment for beginning anglers to professionals, and says fishing for bass and crappies goes on all year on the lake, and only paddlefish have a season.
Being out on the lake was so fun. I caught three crappies and one bass, and had many more bites. But since I’m a very inexperienced angler, I didn’t reel in fast enough, and most managed to wiggle off my hook. Before long we moved to another one of Uxa’s favorite spots. My fishing partner caught about seven or eight fish, including one chunky bass. We took lots of pictures of each other and our fishing guide took some for us. We even looked down the throat of a couple of fish and took photos of that. We laughed a lot and figured Jack probably thought we were a little crazy, but he made the trip fun for us novices.
Castle ruins and a romantic cave 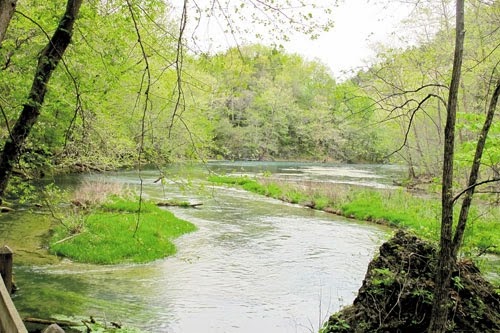 Later on, we hiked up a hill to the castle ruins we first saw from the air. Over a century ago, a wealthy Kansas City businessman purchased 2,500 acres so he could build a European-style castle for his private retreat. Luck wasn’t with him, however. Construction began in 1905, but in 1906, he died in an auto crash. His sons completed the castle, but a fire in 1942 gutted the inside. Today the bare stone walls remain at the edge of a cliff – the stark and mysterious remnants of one man’s dream.
The state of Missouri purchased the property in 1978 and opened it to the public as Ha Ha Tonka State Park. Today the park occupies over 17,000 acres and has 85 miles of shoreline near Camdenton, one of the towns on Lake of the Ozarks. Near the base of the castle ruins, we had a lovely hike to one of the state’s largest natural springs.
Bridal Cave in Camdenton was extensive, beautiful and unexpectedly memorable. The varied rock formations were impressive, and one large, tall cave room was full of stalactites that look like organ pipes fit for a wedding.
Legend has it that an Osage Indian couple were the first to be married there in the early 1800s.
Since then, about 2,400 weddings have taken place, and friends on this trip renewed their wedding vows on their anniversary that day in a very touching ceremony that brought tears to my eyes. Then we celebrated with a champagne dinner complete with a wedding cake at the elegant Vine Restaurant and Art Gallery.

Missouri is also known for its wineries, and people travel hundreds of miles to the Lake of the Ozarks to enjoy the area’s breathtaking beauty and regional wines. Golden Rock Winery offers wine tastings and a restaurant with delicious food. Seven Springs Winery sits atop a hill, so after a wine tasting, we sat on the patio sipping a full glass of wine, eating a light lunch and admiring the view.
Lake of the Ozarks likes to brag that it has more shoreline than California has on the Pacific Ocean, Hall says. I can see why people who enjoy water activities, golfing and hiking, and just being outside love the Lake of the Ozarks. It’s 558 miles from St. Paul and an easy side trip on the way to Branson.
The Willmore Lodge Museum and Visitors Center explains the history and construction of the dam and offers visitors information about the area.

For more information online about accomodations, activities, restaurants and shopping, go towww.funlake.com.
Pamela O’Meara can be reached at pomeara@lillienews.com.

If you would like to see more from Pam here is the link to her home page.