In Door County, ‘ life is just a bowl of cherries’

It’s cherry season now in Door County, Wisconsin, and thousands of cherry trees are laden with bright the bright red fruit. You can pick your own Montmorency tart cherries or buy them at cherry stands and shops along the road, eat a variety of dishes that feature cherries and learn the history of cherries.

That’s what I did recently.

In the 1950s and ‘60s Door County reigned supreme as the nation’s cherry capital with more than a million cherry trees. While the Traverse City, Michigan area now claims the title, Door County is still the place to go for cherries.
The Door County peninsula, a finger of land north of Green Bay, is surrounded by the water of Lake Michigan.  During the mid-May to October the tourist season, a variety of colorful flowers are in bloom around the family-owned restaurants and lodgings. The quaint villages nestled in the bays are clean and welcoming. People are friendly. The beaches with their sparkling water and sea gulls flying around are inviting. Hiking, bicycling, kayaking and other summer sports, summer theaters and lighthouses are popular attractions. Some call it the Cape Cod of the Midwest.
The rolling farm land in the middle of the peninsula is a rocky limestone underneath with just a little topsoil. Early settlers discovered that cherry trees flourished there because they have a shallow root system suitable for this shallow soil.

At Seaquist Orchards in Sister Bay, owner Dale Seaquist talked about his 1,000-acre orchard, the largest in Door County, and told us that nowadays he uses a machine that shakes the trees and captures the falling cherries in an upside-down umbrella gadget and uses a drum-like machine to pits thousands of cherries in minutes. We watched preparations for baking cherry pies and browed around the cherry store to sample cherry fudge, cherry salsa, cherry jam and more.

Then after picking some cherries, we made cherry bounce, which I had never heard of. We washed our cherries and then packed a pint jar two-thirds full, added about 1/3 cup sugar and filled the remaining space with brandy. I’m saving it for a Christmas drink and garnish.

Out in the country, Country Ovens has dehydrators that produce Montmorency tart dried cherries and more recently, tart cherry juice full of antioxidants they are marketing to college and professional sports teams like the University of Minnesota. We sampled the cherry juice, cherry trail mix, salsa and jam and bought dried cherries to take home.

Since it’s the cherry season, and tart cherries are often touted as having powerful anti-inflammatory properties, I decided to eat as many dishes with cherries as I could. So for my dinner the first night on the expansive outdoor deck overlooking the bay at the Carrington Pub and Grill  in Egg Harbor, part of the Landmark Resort where I stayed for a few nights. I ordered a thick slab of tender pork ribs with a sauce full of cherries, cherry crisp for dessert and wine with a lovely red cherry essence.

Breakfast the next morning at Bistro at Liberty Square in Egg Harbor included cherry oatmeal, French toast baked with walnuts and heaped with whole cherries plus a glass of cherry juice. Then in Ellison Bay, we stopped at Island Orchard Cider for a taste of hard cherry cider on the way to Wilson’s in Restaurant & Ice Cream Parlor in the town of Ephraim where cherry ice cream, shakes and sodas were featured.

At Rawleys Bay Resort we enjoyed a dinner buffet of tilapia with a lemon cherry cream sauce, pork with cherry sauce, chicken with cherries, creamed corn with cherries and dessert of cherry pie, bars and cake, plus a drink of cherry juice, vodka and ginger ale. Then I walked out to the pier there to look out at the water and charter fishing boats and saw a mink, slick from the water, climbing among the rocks.
The following day at the White Gull Inn in Fish Creek, we had French toast stuffed with cherries and cream cheese, which was the winner of the Best Breakfast in American Challenge on Good Morning America. Later, we stopped at Fred & Fuzzie’s Waterfront Grill in Sister Bay, where we sat at picnic tables on the lawn overlooking the sparkling bay for lunch. I ordered a cherry chicken wrap served with a cherry margarita.
In between, we stopped at a Peninsula State Park overlook to see Strawberry Island and across the bay, Marquette, Michigan. A bald eagle swooped by. We climbed an old fire tower for an even better view. And we did a Segway ride out in the country past a Seaquist cherry orchard.
The traditional Door County fish boil at The Old Post Office restaurant in Ephraim included cherry pie for desert. Fish is cooked outside in a big kettle while everyone sits around in a circle watching. First in the kettle is salt and then potatoes, onions, freshly caught whitefish. At the end it is all flamed up high to cut the fat in the fish. The fish is delicious. Afterwards, we saw a stunning red sunset over the bay.

So there are lots of summer water and trail activities in Door County. Eating all things cherry and learning the history of cherries is a unique addition to a vacation at this time of the year. 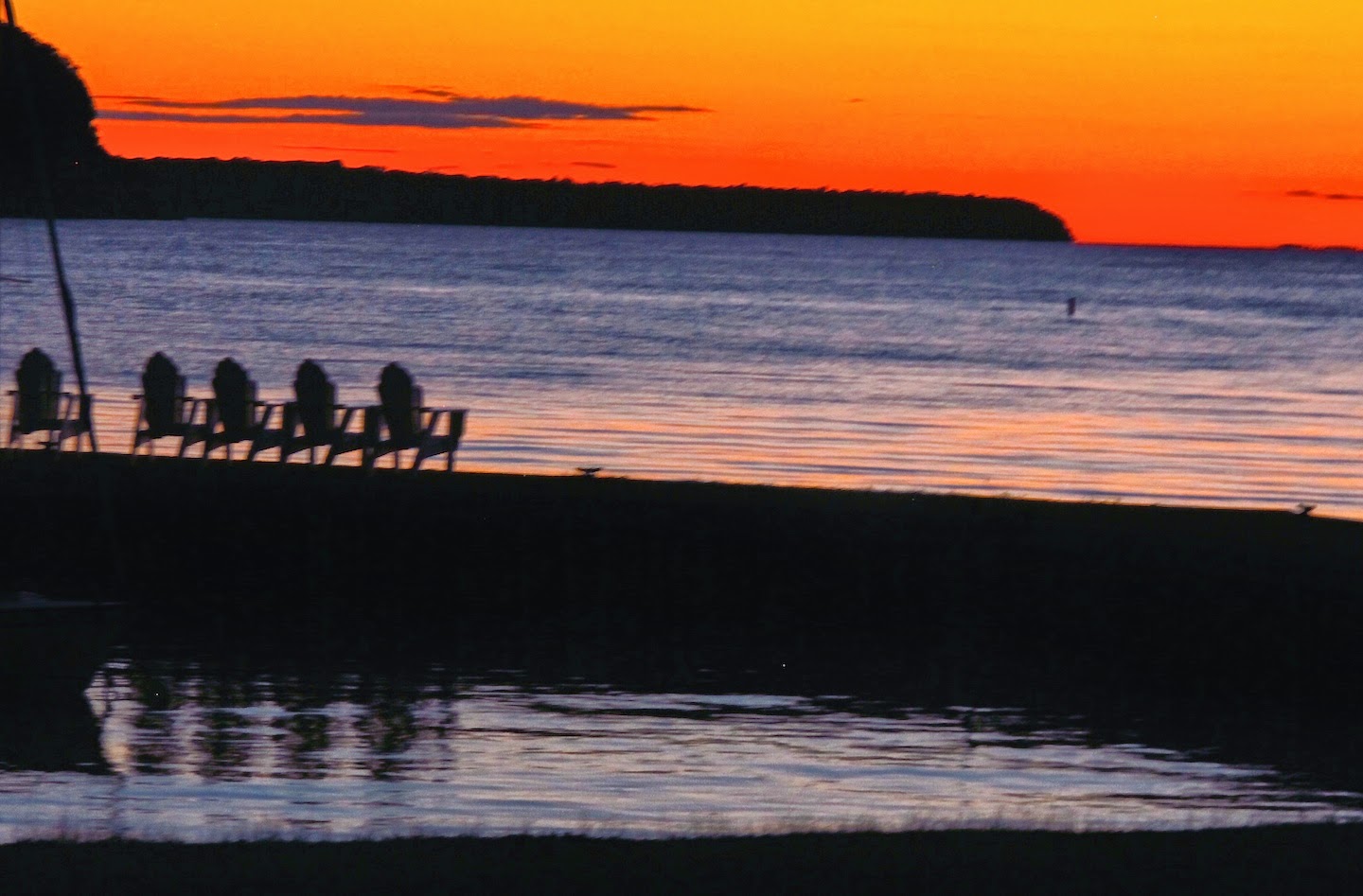