Children do not know that they are born! They have so much cool stuff that many of us wish that we were kids once again. They have so many cool toys and gadgets to play with, that it makes us all somewhat jealous. Have you seen the latest gadgets on the market that are specifically aimed at children? It’s insane. They have a wealth of toys that are sure to make even a grown man envious. 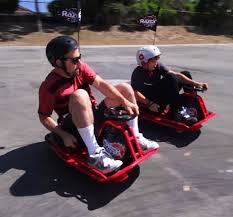 Let’s take a look at the top toys that are sure to make you wish that you were a child again:

A Razor Crazy Cart is proving to be this year’s must-have toy. For adults, this will be super envious of this amazing cart. It’s similar to a go-kart, but it is specially designed with kids in mind. The cart itself is made to drift. The system allows children to change the angle and direction of their cart. This means that they can travel not only forwards and backwards, but also sideways and diagonally. For many parents, this is not something that will be used in the house. The Razor Crazy Cart is proving to be a big success with many children. They love the bonkers design of the cart. They are perfectly safe to use, much like a bike. It seems wholly unfair that kids get all of the fun. This is a serious piece of kit. Many adults will want to have a go on this mean machine.

Pillow weapons are incredibly neat. Think of pikes, staffs and hammers all designed onto a soft, fluffy pillow. They are the epitome of cool. Remember when we were kids? We had hard plastic weapons to play fight with. It usually always ended in tears. This is the ultimate pillow fight. In fact, if you bought one, your buddies would be jealous.

This bizarre concept bike is aimed at the younger market. It’s essentially a bike with a pony silhouette that makes it look like the rider is riding a horse. It’s bizarre and totally nuts. But, for those women that always dreamed of having a pony when they were little, this may be the way to realizing that dream! You are sure to be envious of any little girl that has one of these.

Chalk piggy banks are super cool. They are similar to the regular piggy bank, but you can doodle all over them in chalk. They are designed with a blackboard style coating that allows you to write on them. They are a great gift to bestow. We don’t think that you have to be a child to appreciate this.

For those that want to have a vintage style toy, but combined with the fantastic concept toys of 2014, wooden Lego men are just the thing. These work, in the same way, as their plastic counterparts. They are made of wood and are simply lovely. They are retro, twee and cool all at the same time.