This post is about a day trip around Pittsburgh, PA. This is by Rick Wright. This is his home turf and he has some great suggestions for you. 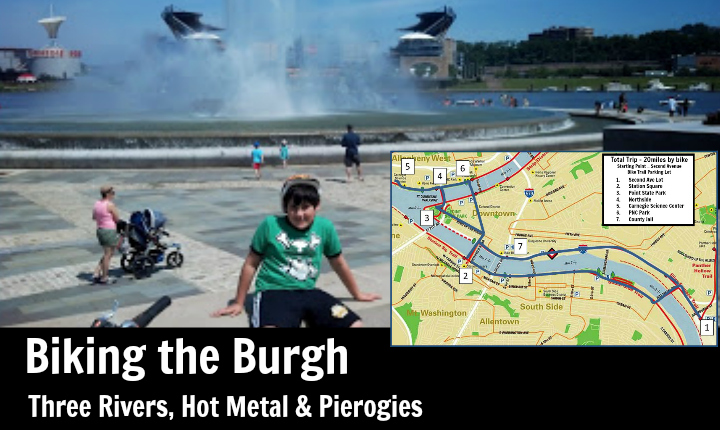 Today’s trip is one of our favorites.  We live near Pittsburgh.  Our rivers define us.  The Monongahela from the south, and the Allegheny from the north meet at Point State Park to form the Ohio.  When I was a kid, steel mills lined the Mon from just south of Pittsburgh for 50 miles.  Barges loaded with coal passed each other at every bend of the river providing the carbon for carbon steel.  At night, the Mon Valley lit up like day.  It was “Hell with the lid off”.

Along with the barges, railways ran along each river bank.  The Pennsylvania Railroad, The Pittsburgh & Lake Erie, The Baltimore & Ohio, The Chesapeake & Ohio, The New York Central.  These were the names written on the cars that rumbled through the Mon Valley when I was a boy.  But as the steel mills shut down, and the railroad companies merged, the need for so many railways disappeared. But instead of allowing the lines to fall into decay, a great thing happened.  Many of the railways became bike trails.  So many that a continuous trail starting in Pittsburgh, follows the Mon south to McKeesport, then follows the Youghiogheny River (right past my house) for over 100 miles before connecting with a trail near Cumberland, MD that follows the Potomac River to Washington, DC.  In total, the Pittsburgh to Washington Bike Trail covers 335 miles.  I’ve never done it, but I plan to.  The trails are wide, flat, and constructed of crushed limestone, which is an
excellent surface to ride on unless it’s raining. 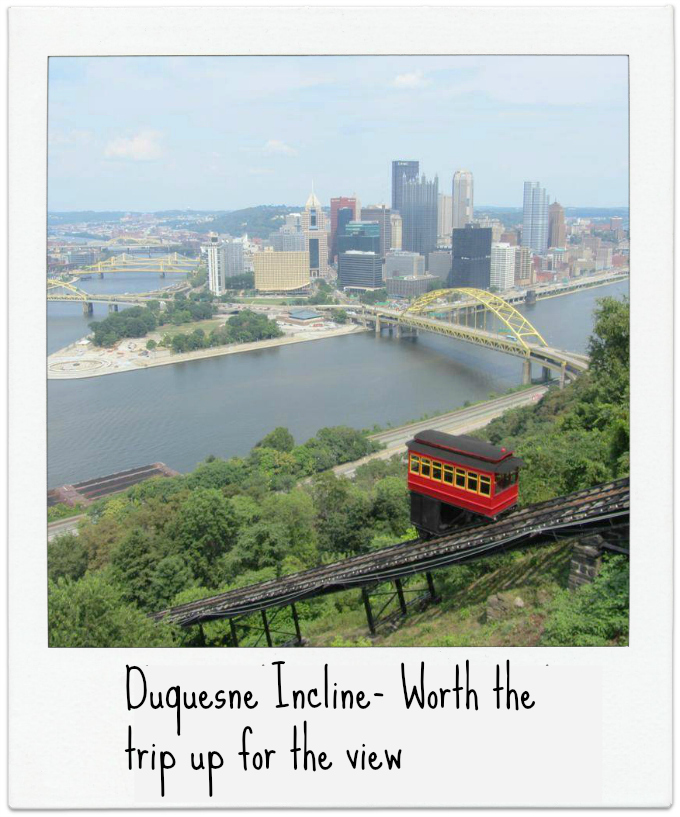 Like all big cities, there were blackout restrictions on Pittsburgh during WW-2.  The rich stained-glass roof of the Pennsylvania and Lake Erie railway station was painted black and promptly forgotten, until a workman inspecting the roof for a new restaurant scuffed the paint with his boot and a shaft of green light stabbed through the dark interior.  The station now is home to one of Pittsburgh’s finest restaurants, the Grand Concourse (http://grandconcourserestaurant.com/).  It is a beautiful place so stop in and look around.  Station Square is chock full of restaurants, bars and shopping, so lock up your bikes and pick a place for lunch (http://www.stationsquare.com/info/restaurants).  We generally have lunch at someplace quicker like the Hard Rock Café which has an outside patio where we can eat and keep an eye on our bikes.  It also overlooks a music-driven dancing fountain that is fun to watch. 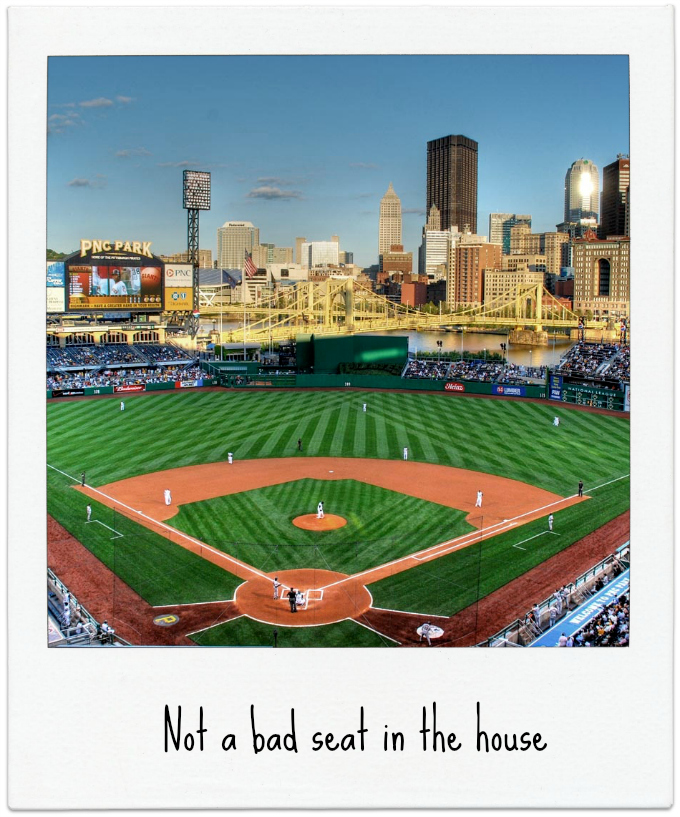 I’ve been a Bucco fan since before I could read.  My dad took me to Forbes Field to see Dick Groat and Bill Mazeroski play, then to Three Rivers to see Roberto Clemente and Willie Stargell.  The 60s and 70s were great times to be a Pirate fan.  The 80s tailed off a bit, but came back strong in the early 90s.  Then the bottom fell out.  The Pirates set a record for 21 consecutive losing seasons from 1993-2012.  It was miserable.  After these lean times, the team looks to be pretty good again making the playoffs the last two seasons. Finally, the best park in baseball has a team worthy to play in it.

PNC park is gorgeous.  Outside the outfield fence is a walkway, then the river with the buildings of downtown beyond.  The view is breathtaking. 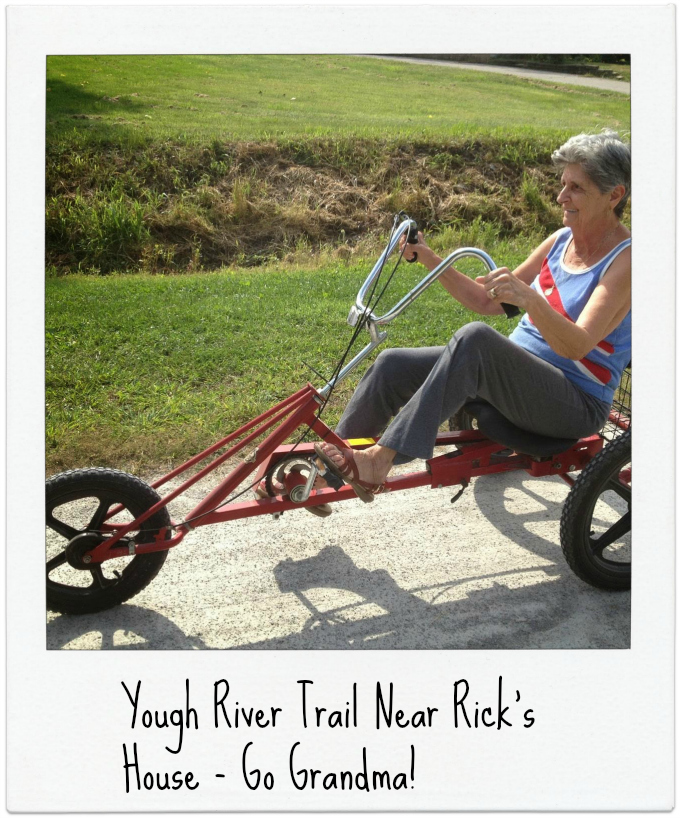 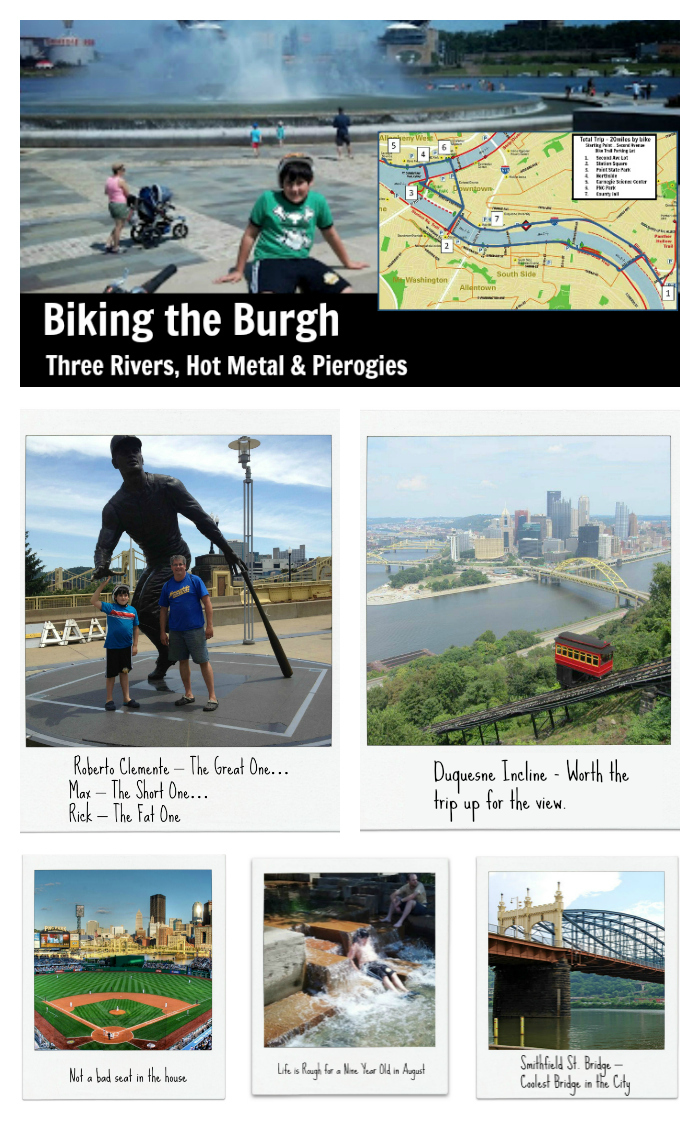