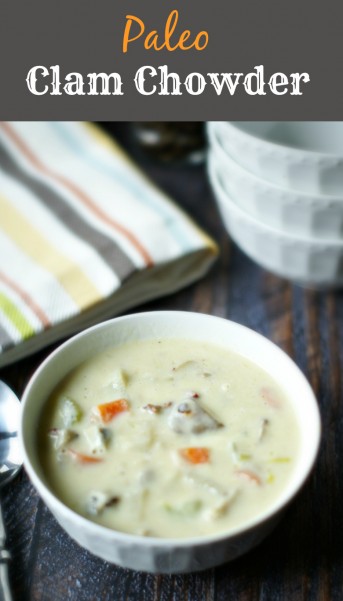 All during lent I was craving a New England style clam chowder. Of course I only got around to making it after Easter but I’ll at least have this recipe for next year. To make it Paleo, I didn’t use flour to thicken it, instead I used a cauliflower cream sauce like the one in my Paleo Chicken Pot Pie Soup. And instead of potatoes I substituted sunchokes. I saw them at my grocery store and had heard about them on Top Chef (one of my favorite shows) so I had to try them. They are a root vegetable that tastes like a potato to me.  Sunchokes (or Jerusalem artichokes) are a good source of prebiotics. Most of the carbs in sunchokes are in the form of inulin that provide a source of food for the good bacteria in your body. But I bought them because they were on Top Chef….and because they taste like potatoes.