I was really excited to write this post. Adding a third dimension to a garden always makes it look more interesting. I wanted to grow a variety of straw bale gardening tomatoes for my wife. She cans and makes a mean Bloody Mary. While building a trellis system is not necessary for a straw bale garden, it is highly recommended for tomatoes. A trellis can be both functional and decorative.

Hi this is Chris from LiveDan330.com. We are doing a series on straw bale gardening. We are doing a video series to go along with the blogs. If you want to read more about our blogs, simply go to livedan330.com and search “straw bale gardening.” Well, um, this ones is about trellis. I have three different trellis’ in the garden this year. The first one is this right here. We wanted to make a archway of cucumbers and tomatoes. So the first thing you do when you walk into the garden is that you have this really pretty entryway that is just kind of a grand entrance into the garden I guess. Um, we took “t” posts. Very simple, they are inexpensive. They are only like $4 a piece. Pound them into the ground a couple of feet that is just going to keep them stable. This is actually cement mesh. I don’t bother buying the ah trellis’ at the stores. This was $7 and all we did is just take some wire here. This is #9 wire, you could use 12 guage wire as well. Um, and we fasten it to our “t” posts and we bent it over the top and um it makes this nice little arch. Um… make sure if you do this though that you leave enough room for a wheelbarrow in case you want to come in here. We actually did some Dills Atlantic Pumpkins so we are hoping for some 4-5-600 pound pumpkins this year. That will definitely need a wheelbarrow. These here are tomato plants. They are only a couple of weeks old here. We planted them and they are going to grow up. I have a couple of cucumbers right here and we will see how that goes. Next, one of the challenges we have is I have full sun only. And that is great for most garden vegetables. But, there are some lettuces that like partial shade. What I did was I built this trellis here at an angle to help produce some shade. We have some sweet peas and some other beans. they are going to grow up here and that is going to produce some shade for all this area in the back that you can see that is seeded already. It is also going to make a little fort for the kids. Ahh, the last trellis we have is just a wall in the back. So it is going to be our backdrop to the garden as you are looking at it from our yard. We have again our cement mesh we have our “t” posts and we just wired them together. It’s been stable and great. We have our tomatoes that are indeterminate tomatoes so they are just going to keep growing and growing until they die of frost in the fall so um, I’m going to have 4-5-6 good months of tomatoes here I hope. Again, you can see them in the bales being watered at the moment and we are just train them to crawl up here and create a big tomato wall for us.

I made three trellises. The first two were specifically for straw bale gardening tomatoes and the third for snap peas. I am calling the first trellis the “Entryway Arch” because I wanted a great entrance to the garden. It will be used to train tomato and cucumber plants. I knew I had achieved a good entryway to the garden when my four year old saw it for the first time.  He asked, “Dad! did you make us a maze?” I explained it was a garden. His reply when looking at the entrance was “We are going to have a flower store! Awesome!” So, if you have the excitability of a four year old, you are going to love what I did.

As you plan out your straw bale garden and trellis, you should keep in mind you may want to wheel a cart or wheelbarrow into the garden. Make sure you leave enough space in any trellis system for this.

Entering from my yard, the first thing you will see is a trellis formed into an arch to make a doorway. I will grow cucumbers and indeterminate (plants that just keep growing) tomatoes. Most likely, I will use cherry tomatoes because they are such rapid growers. Here’s how I made my entry way to my straw bale garden tomatoes arch: 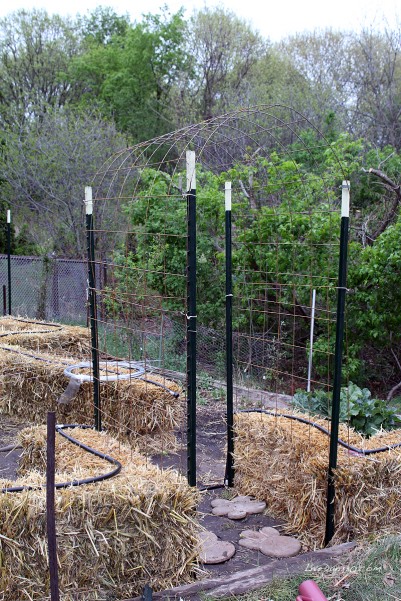 Fastening the remesh to a post is very easy. I simply took some of the galvanized wire, cut it and twisted it around the post. To tighten it, use a pliers and twist. Here are a few of the fasteners I made:

It is easy to see how creative you can get with these materials. Why not make your garden fun and interesting!?

Some lettuce and vegetables don’t like full sun. I wanted to create some shade for them. So, I made a slanted trellis in the middle of the garden that would cast about half of a day’s shadow on one row of my bales. I simply used steaks and posts again at the four corners and another sheet of remesh. Snap peas will have pretty flowers and the space underneath the trellis will be fun for the kids.

Last, I have a large section I would like to train 8-10 tomatoes on in the back of the garden. It will act as a backdrop to the garden. It just happened to work perfectly that my existing garden was 14 feet wide and each remesh sheet was 7. All I had to do was place three stakes in the ground and line up two sheets to cover the back.

Here’s what the whole thing looks like all together:

Now, I just need to let the straw bale garden conditioning finish. While I do that, I will be placing something down as a barrier in the middle of the garden.