How do I know when my bales are ready to plant? Straw bale conditioning explained.

One question I have asked quite a bit it “how will I know when my straw bales are ready to plant?”  I have had a very hard time getting an answer online or from Joel’s book, Straw Bale Gardening. Joel says to follow his system of watering and feeding the bales with nitrogen rich fertilizer and then end with a balanced fertilizer. He says it always works in the end. If you read the conditioning section in Joel’s book, he notes that by day 6, you will likely notice the temperature of the bales has gone up and the smell of composting will be evident. By day 12, following his system, the bales should have cooled and if the bales feel cooler than your hand, you are ready to plant. In an effort to find a clearer answer I have also read several other blogs about conditioning straw bales. They seem to all be consistent that the temperature will rise and then fall. Finally, when the temperature is under 100 degrees or so (which would be consistent with Joel’s hand-test) the bales can be planted.

Here’s What I Experienced:

To give you an idea what I experienced, I was able to feel heat on the bales as early as day three. By day four, a noticeable smell (not a bad smell, just noticeable) was wafting through my yard. During days four, five and six heat could be felt radiating from the bales as you walked through the garden. Out of curiosity, I purchased a small thermometer I could use to probe the bales. Here are my results:

Day 6: The first day with my thermometer. It has been a couple of days with bales being noticeably warmer than the air temperature and the smell has peaked. The weather had been in the 70’s and 80’s during the day and 60’s in the evening. Today the air temperature was 72 degrees. 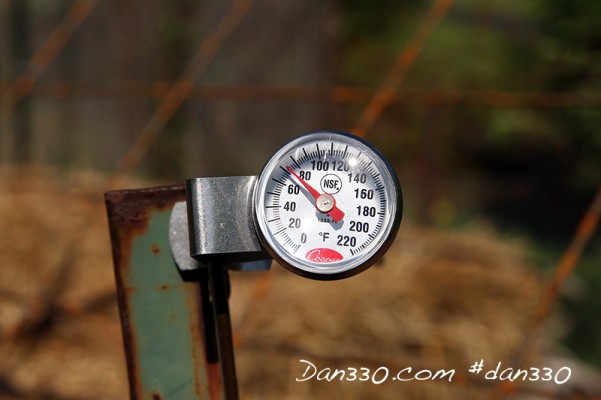 But inside the bales, the temperature is a whole new story! I told my daughter there was a bacteria party going on in the straw bales. She said “They are partying until the house falls down!” She is more accurate than she probably even realizes. Here’s the picture of the thermometer in one of the bales: 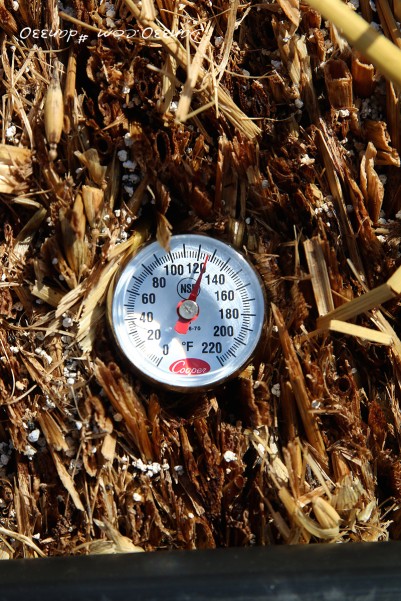 The bale is measuring 128 degrees! Wow! That is hot. No wonder I could feel the  heat radiating off of them for the past few days. I had to look inside. When the straw bales were first purchased, they were light and there was no mold, no spotting, and no signs of decomposition. Today, they look very much like they are being decomposed. Look closely at the images below and you can see a white mold growing all over the interiors. Individual stalks of straw are turning dark and spotting as well. I believe this is all a very good sign. I will update this in a final post on the bales for day 12. 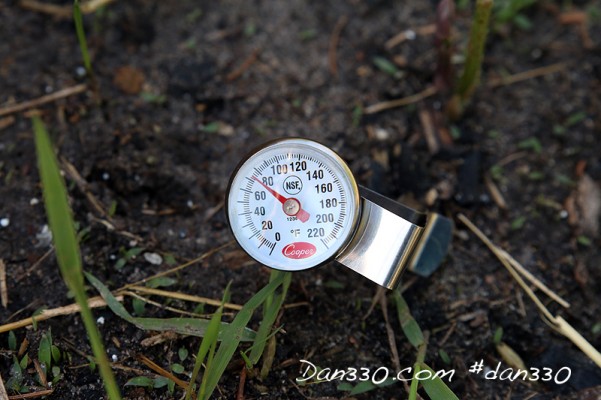 On day 7, I accidentally let my irrigation system run for an hour early in the morning. The good news, was that the bales were saturated. But, I was afraid I had leeched out some of the good bacteria and nutrients I have been making. In the afternoon of the 7th, I measured the bales at 90 degrees and the ambient air temperature at 70. After reading those temperatures, I am pretty comfortable there is still a lot of microbial stuff going on in those bales.

On day 8, the weather had gotten much cooler with some rain as well. The bales measured 62 degrees, but the air temperature was 50 and in the evenings, it had gotten down to the 30’s. I was initially concerned about the drop in temperatures of the bales, but there is clearly some good heat being generated inside of them still and I would have expected there to be some drop off in temperature about this time anyway if I was going to plant a hand-temperature of cooler bale just two days from now. I peaked inside the bales again and they have clearly been decomposing. I am starting to feel quite comfortable with the process now.

At this point, I am very happy with the rise and fall in temperature of the bales. Looking into them, I am comfortable I could just about plant them today. But, I will finish the straw bale conditioning as Joel describes it and should be planting within a few days.

I put the last bit of nitrogen rich fertilizer on the bales today. The temperature was a cool 48 degrees and the bales were all between 60 and 62 internally. Tomorrow I will put on a balanced fertilizer and plant the following day.

Up next in the series, I will be planning out the details of my plants and getting them to my house for the upcoming planting.