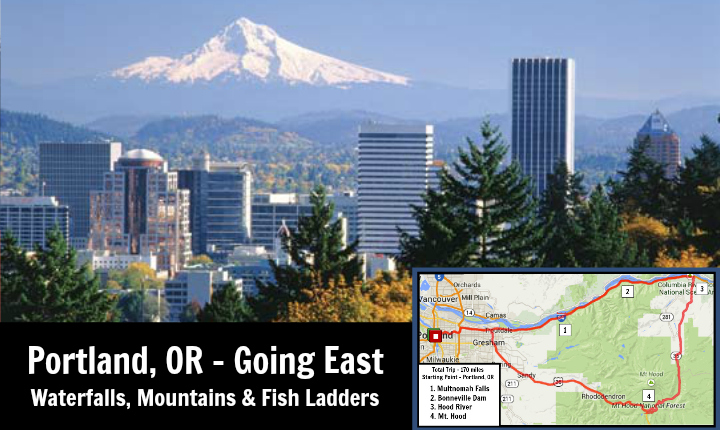 The big cities of the Pacific Northwest are great places to visit in their own right.  But day trips out of those cities are a great way to experience some of the best scenery in America.  Such a place is Portland, Oregon.  Through a long and fruitful relationship with Oregon State University, I have found myself in the Rose City dozens of times.  The state is home to the most varied climates and geologies with the wild Pacific, fertile valleys, mighty rivers, high plateau deserts and the magnificent volcanoes of the Cascades.

Today’s trip takes us out of Portland going east through the mighty Columbia River Gorge, with a stop at Mt. Hood on the way back.  A short trip, but a great way to spend the day.

Just east of Portland lies the Columbia River. Most rivers, such as the Monongahela River where I grew up in Pittsburgh, cut a V-shape valley over millions of years. Some rivers have been carved by glaciers into U-shaped valleys. The Merced River in Yosemite Valley is one of these. So is the Columbia. The land north and south of the river is a fairly level plateau. The glacier scoured out a U-shape valley that is formed by cliffs that fall vertically hundreds of feet from the plateau to the valley floor. The river is wide and a flat bank area lies between it and the cliffs. Two highways follow the river; I-84 and US-30, which run together, or the Historic Columbia River Highway. Do yourself a favor and take the latter. There are several places to pull off the road for scenic views and other sights. 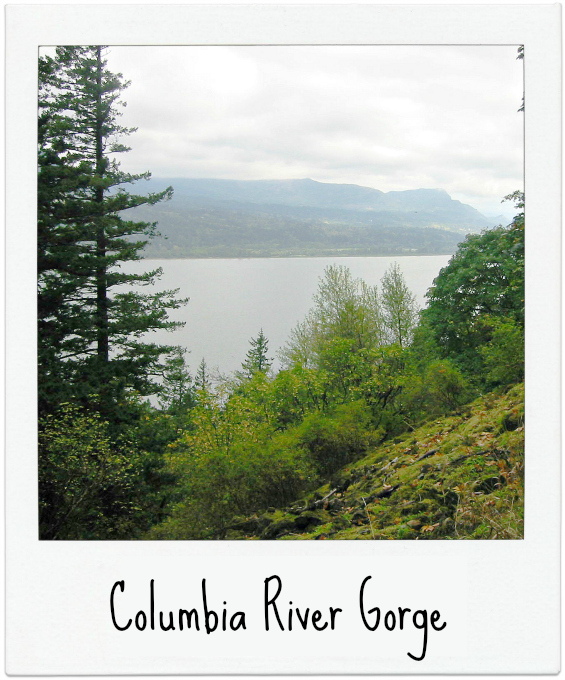 The other key features of a glacial valley are waterfalls that are formed when small streams and rivers plunge off the high cliffs. There are some spectacular falls in the gorge. One of the best is Multnomah Falls about 35 miles from the city. Although it sounds like bad news you might get from you dermatologist, Multnomah is a Chinook Indian tribe from the Columbia River area. The falls drop in two sections 542 ft. in an upper section and 69 ft. in a lower section. There is a large parking area and a trail that leads along the falls to the top. This trail is not an easy climb, but is safe for all ages. At the top of the falls, you can stand right next to the stream and watch the water drop. The view from the top up and down the gorge is amazing and well worth the hike. Unlike Yosemite, the falls run year-round and do not dry out in the summer. 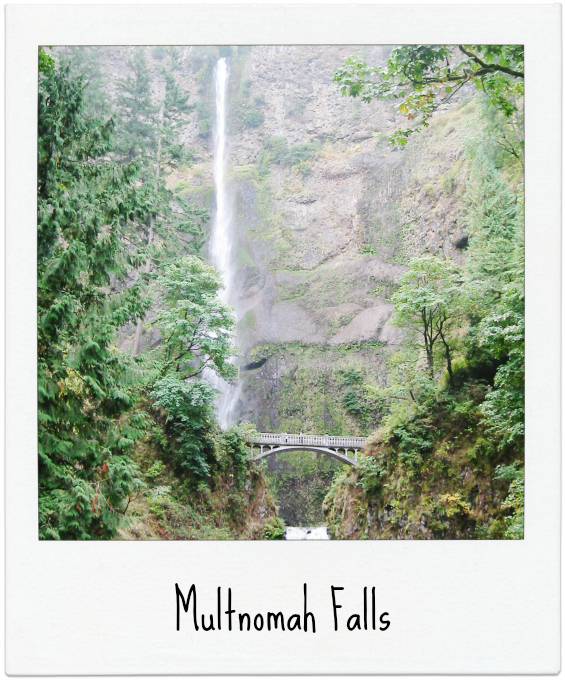 Further up river is the Bonneville locks and dam. A hydroelectric plant across the dam provides over 500 MW of electrical power. The dam was also an early source of environmental controversy. Salmon and steelhead that migrate up-river to spawn were stymied by the dam. Sportsman spearheaded the drive to build fish ladders around the dam to allow the fish to swim past. These ladders are now a major tourist attraction during migration attracting humans and fish eating California sea lions who swim the 200 miles from the sea for salmon dinner. 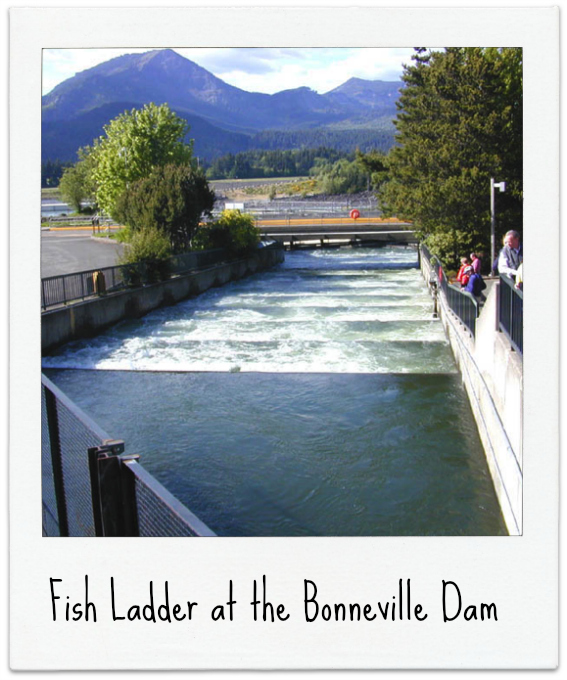 After a stop for lunch in the wind-surfing Mecca of Hood River, we head south along the east slopes of the iconic Mt. Hood. 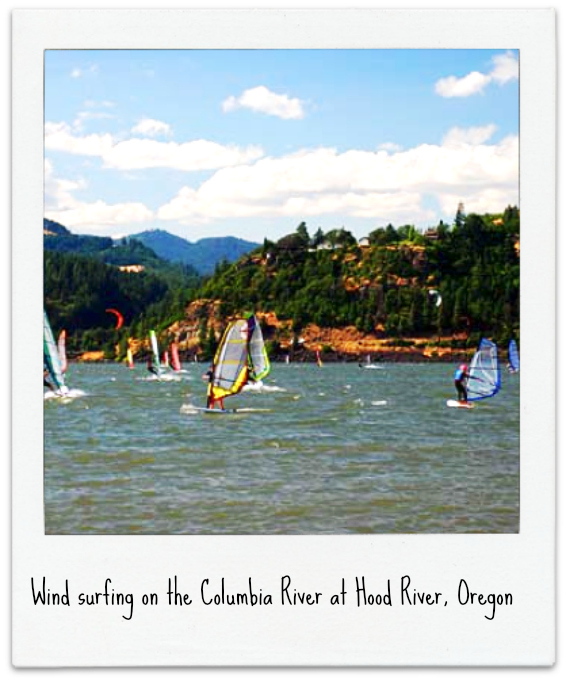 No road goes to the top of Mt. Hood. One way to get close is to drive up to the Timberline Lodge which sits on the south slope of the mountain at about 6000 ft. The lodge is home to the Timberline Ski Resort, and has the distinction of being the hotel used in the movie The Shining. To reach the lodge, we take OR-35 south from Hood River for 38 miles, then take US-26 West for about 3 miles to Timberline Highway. Then 5 miles straight up.

The lodge setting is breath-taking. The mountain summit looms 6000 ft. above you. The resort is so high and gets so much snow, that the US national ski team trains here all summer. Denise and I spent an afternoon hiking up the slopes behind the lodge making it up to about 8000 ft. by my watch altimeter. Blue sky, white snow, and green pines that quickly fall away as you pass the tree line. A sandwich and a microbrew in the lodge lounge, then back to Portland. 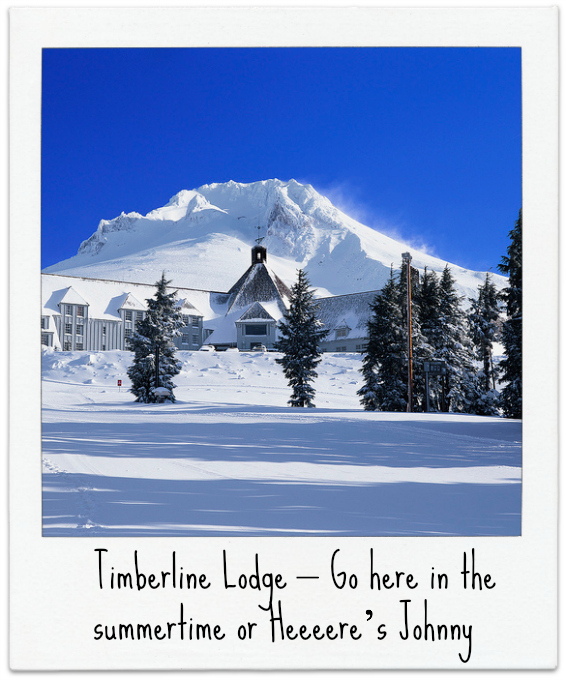 The trip back to Portland lets you wind down as you descend from the pine forests to the strip malls.

Portland is home to some of the best Chinese food I’ve ever eaten, Back in 2008, I accompanied a delegation of Chinese executives who where at the end of a tour of our US facilities before deciding to buy our nuclear power plants.  They wanted to see my test facilities at the university.  My good friend who runs the facility happens to be Chinese and lives up in Portland booked the best Chinese restaurant in the city for a party of nearly 30.  It was one of the best meals I ever had and they bought four plants which we are just finishing building now in China.