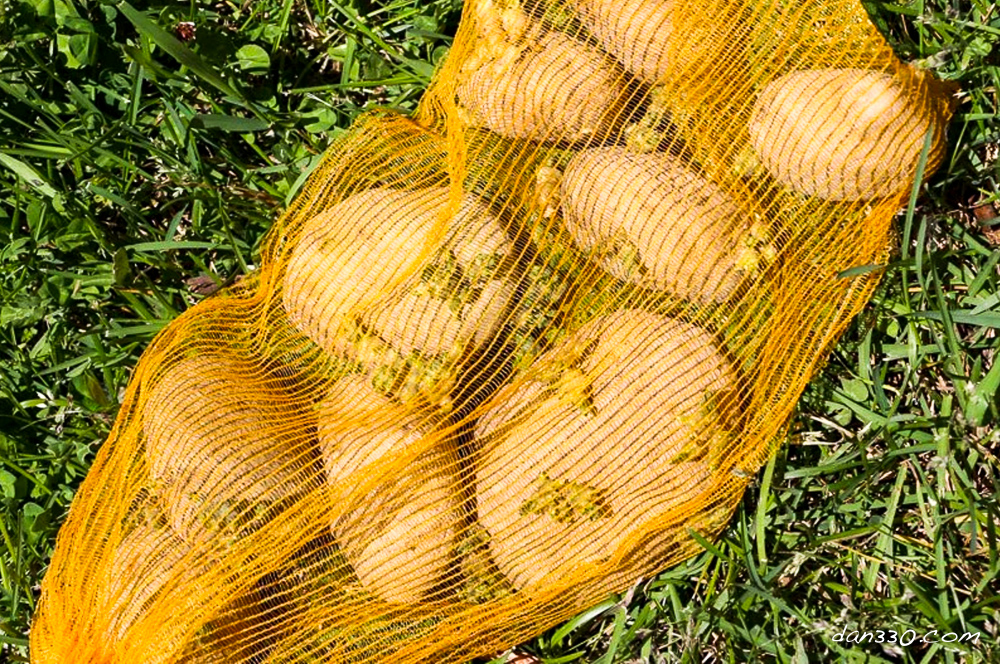 Every garden season I like to try something new, like growing spuds in a simple handmade potato tower.  We had all the stuff in the shed and only needed to get the organic potatoes, a bale of straw and some dirt. Of course you need a nice sunny spot you can mow around too, close to a hose.

8′ section of wire fencing, about 4′ high

compost or bags of dirt 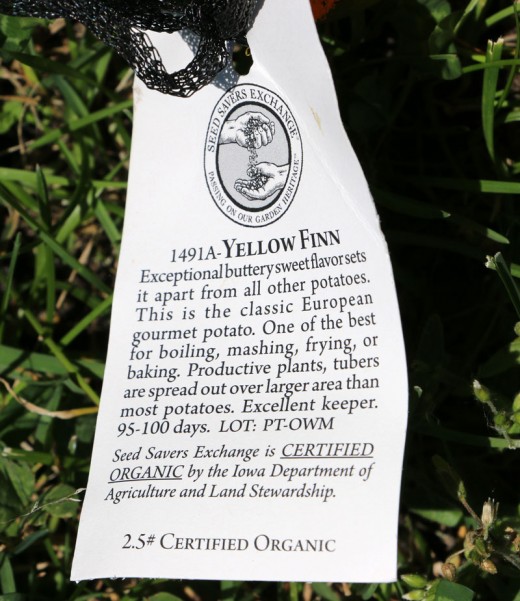 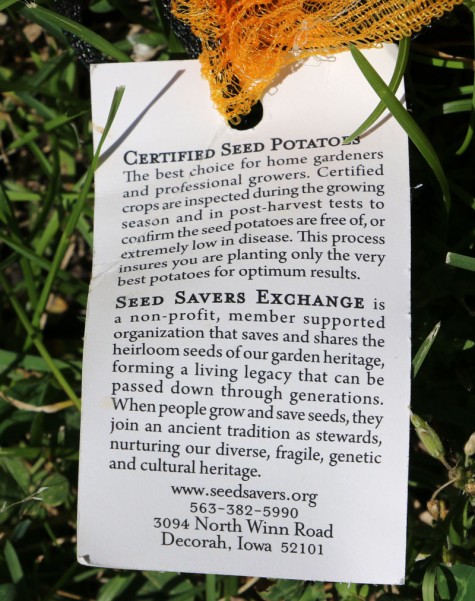 Pound in your posts about 18″ apart at the corners of a square.  Wrap the fencing around the posts and cut so you have a horizontal wire leg to wrap around the vertical leg at the beginning of the fencing.  Using a pliers crimp the ends together to secure. 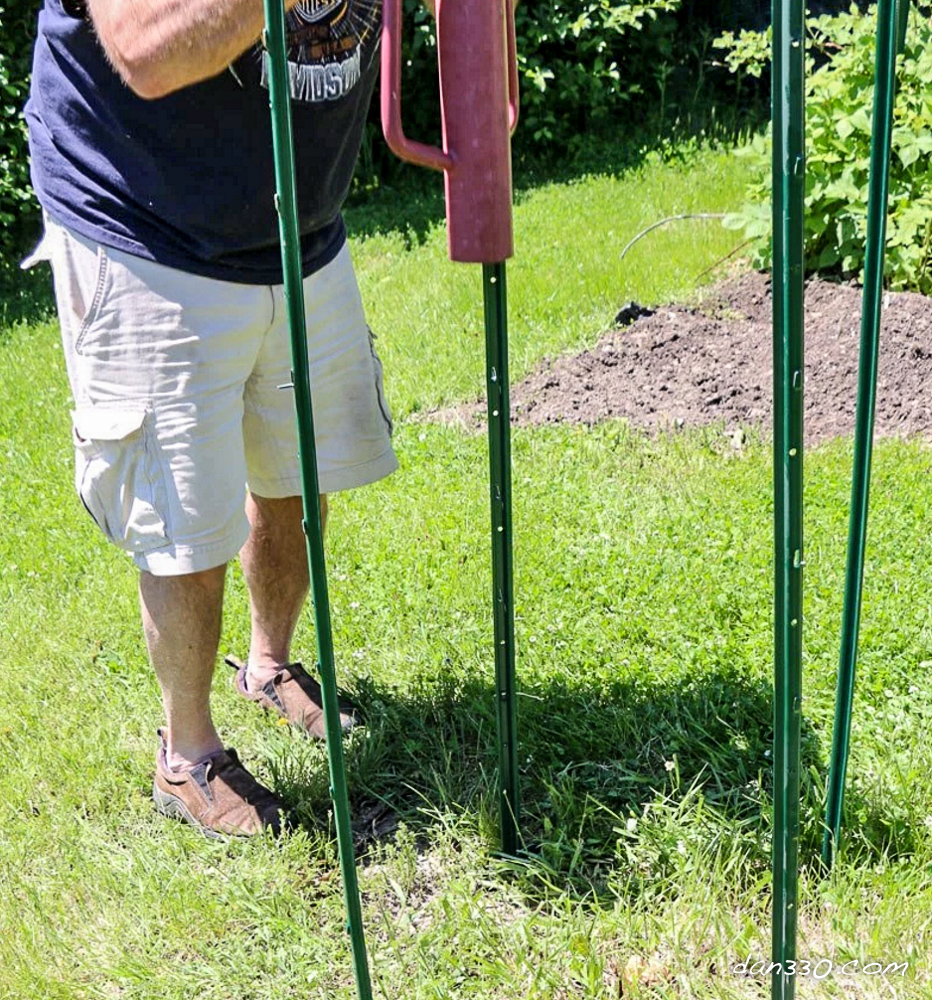 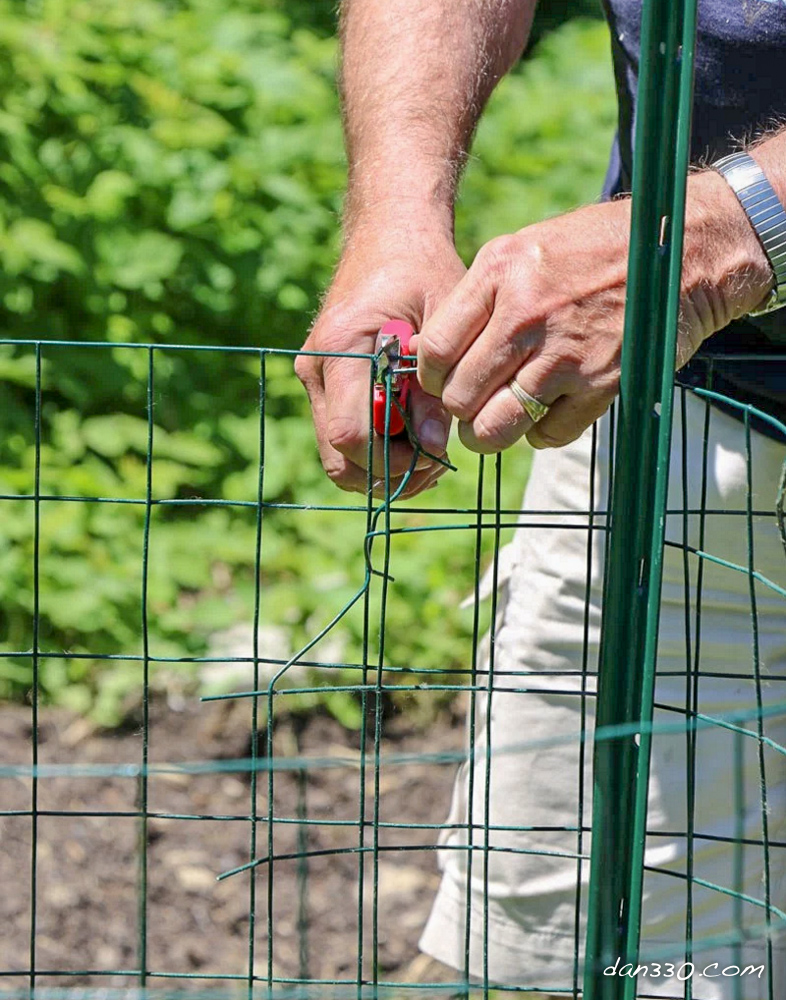 Grab you bail of straw and create a nest shape in the bottom of your fence tower and fill the nest with dirt until it’s a couple of inches deep. 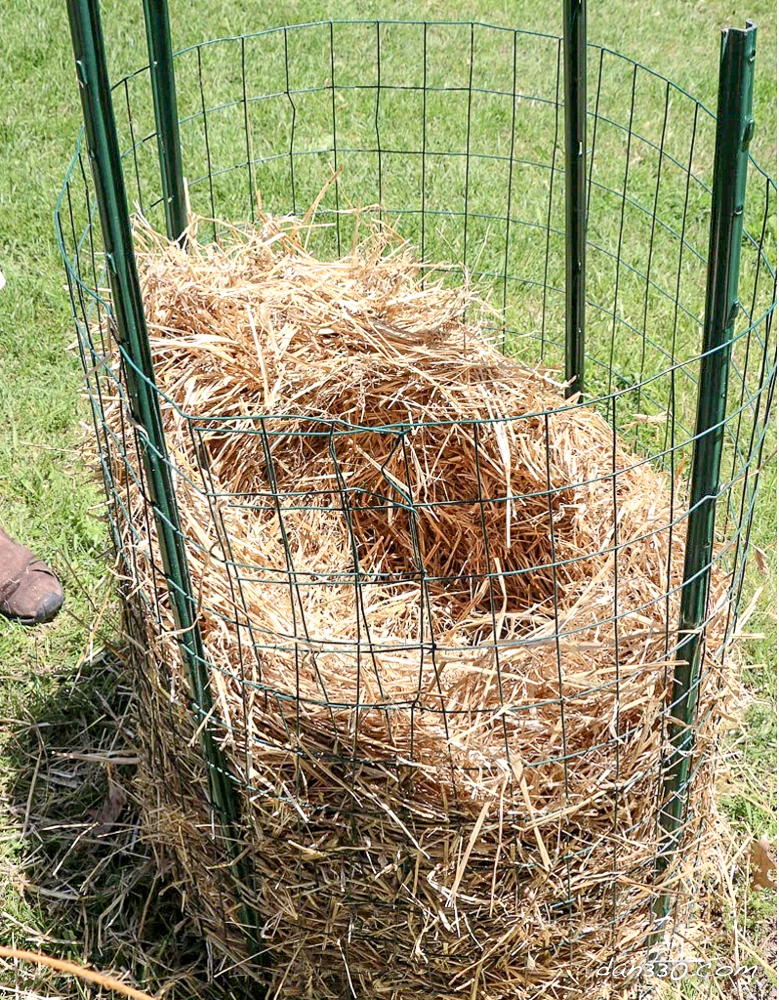 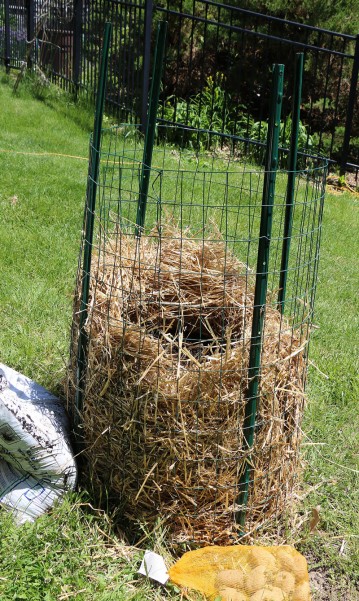 It’s time to cut your seed potatoes and put them in the first layer with their green buds facing out toward the straw sides. Then cover with a couple more inches of dirt and repeat until you’ve used up all your seed potatoes.  I started with 2 pounds of potatoes which translated to 8 medium potatoes with about 4 eyes each which meant there were 36 eyes total to plant.  About 9 eyes were placed around the outside edge of the nest in 4 layers.  Next year I will double the number of potatoes per tower and keep going up.  On the top, I planted the eyes right in the middle so they could grow up.  Cover the top with additional dirt and give her a good watering, as potatoes love water. 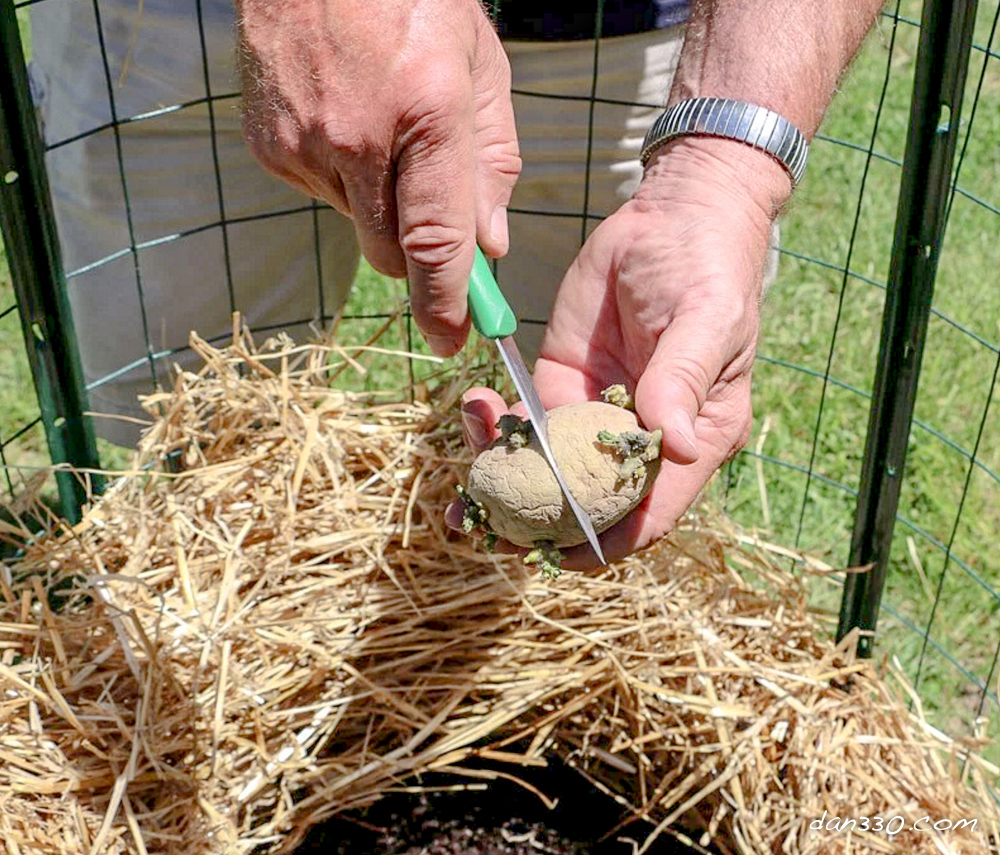 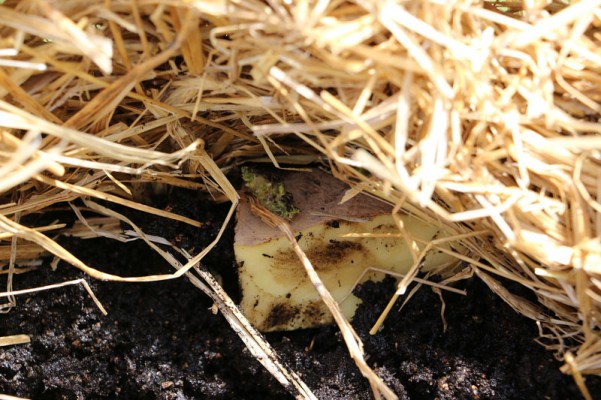 Had we been a little more organized I would have planted earlier than June 1st here in zone 4 and given them even more time to enlarge.  Here is the potato foliage on the 4th of July and what the flowers look like. 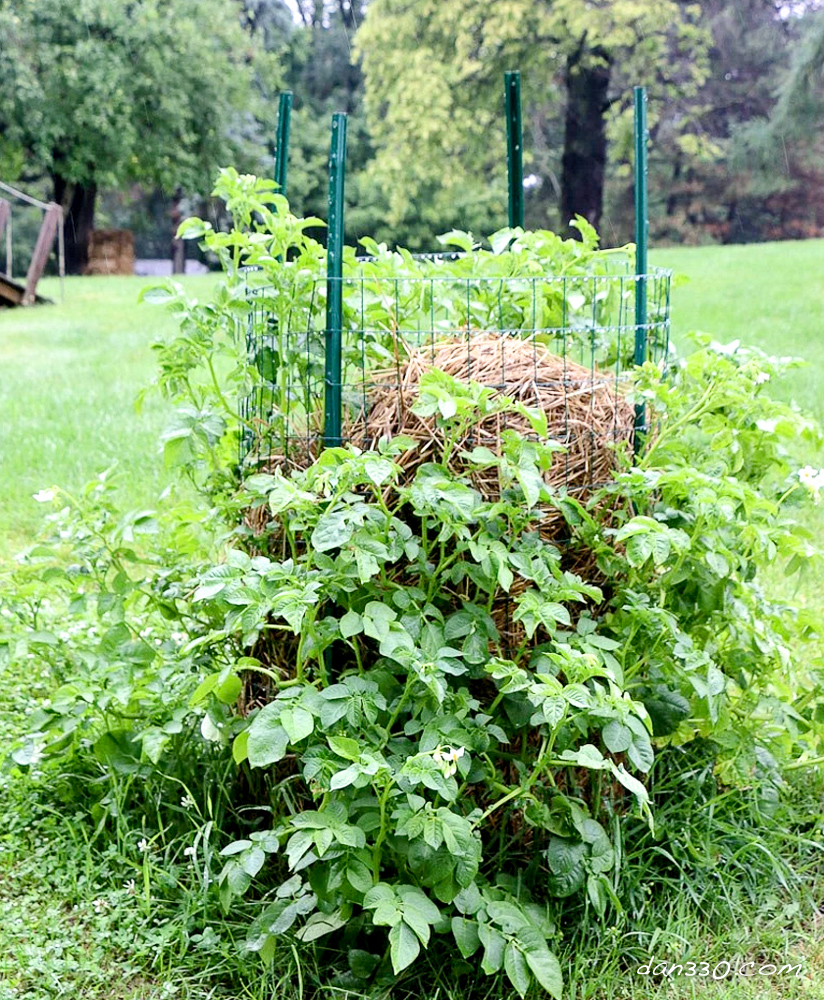 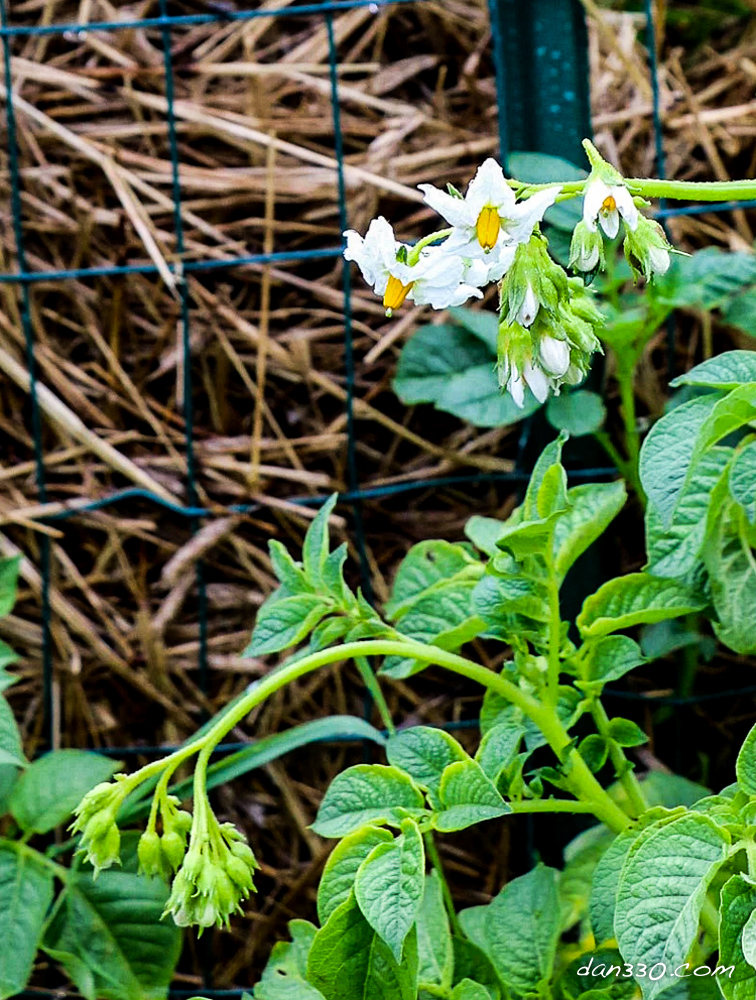 Keep watering throughout the summer.  I would recommend setting up a soaker hose on a timer to make it easy to maintain.  The beginning of the summer was nice and wet a gave the vines a great start, but we neglected them at the end of August-beginning of Sept, for about 3 weeks and when we returned home they were dying out.  Had we put on the soaker hose I don’t think we would have harvested them as soon and would have ended up with a few more pounds of spuds. These yellow Finns are considered a mid-season potato so maybe this was a fantastic crop.  I don’t really know, as this is my first foray into spud growing. 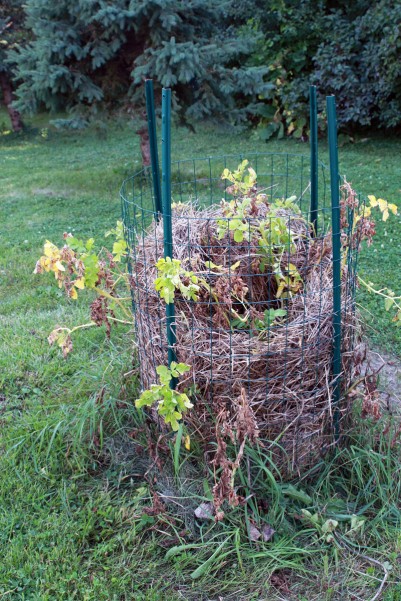 Maybe next year we’ll branch out to different varieties and put in some late-season potatoes too.

Now for the fun part – the harvest!  To say I was excited is an understatement, and the garden geek came out full force as you’ll see in the video, but first here are some photo’s of the uncovering, the unveiling, the treasure hunt for homegrown goodness that is pesticide free and requires no weeding. No back breaking digging up your tubers either.  Just open the fence and let them roll out.  We recommend not watering the tower before the opening unless you like to get muddy. 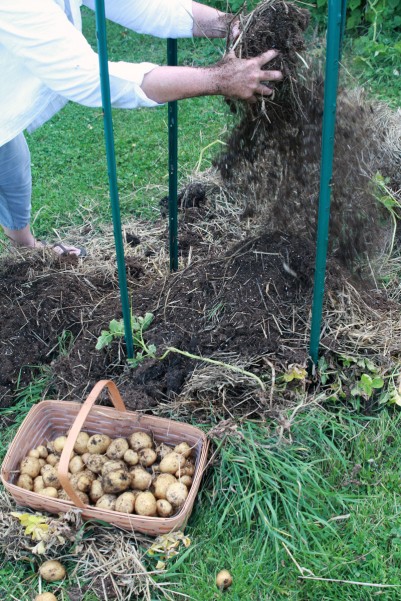 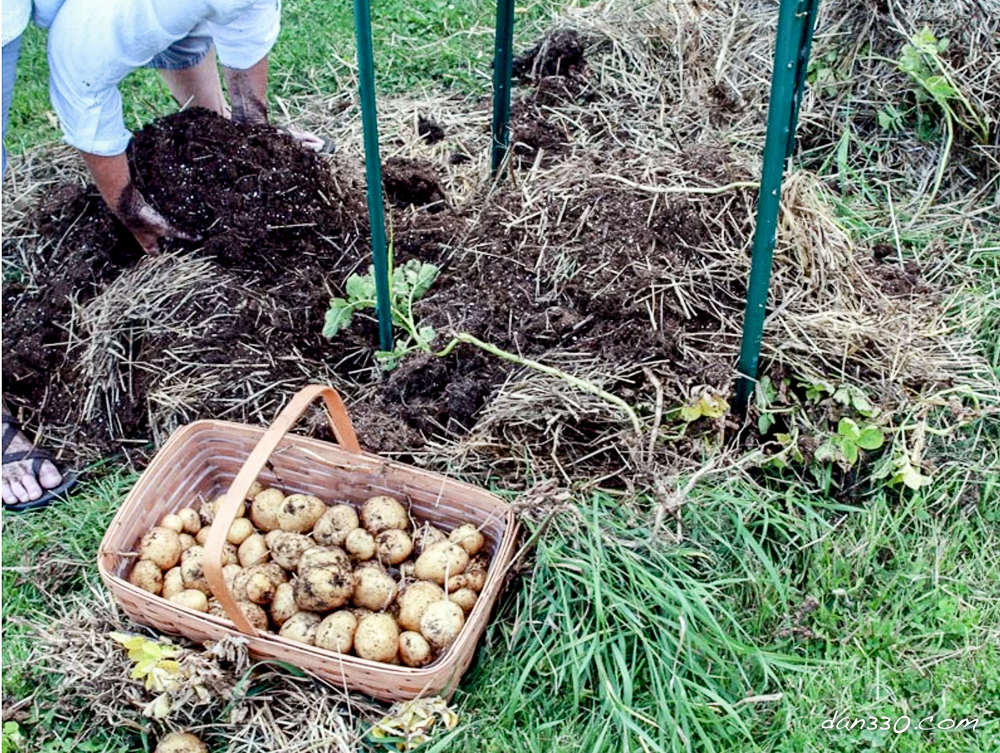 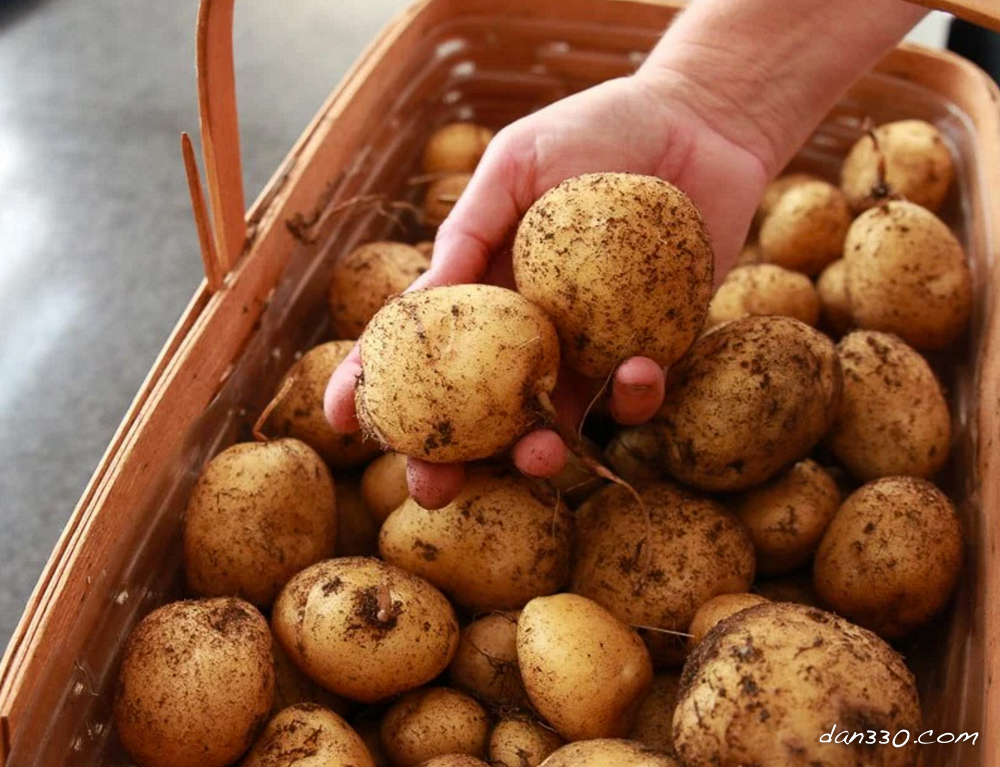 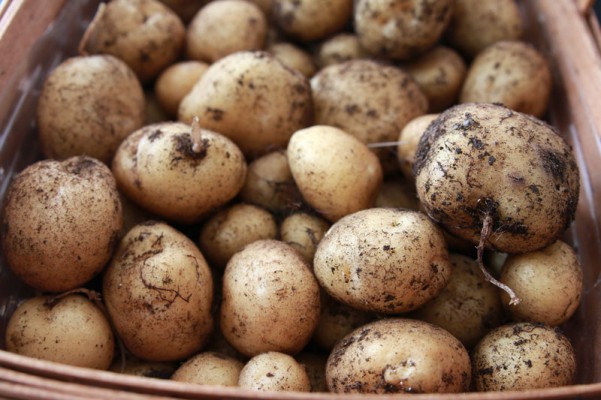 Watch our video and see how easy it is to grow your own potatoes.  We can’t wait to try our gourmet European Yellow Finns.