I just wrote our post about visiting Villa Vanilla. But the process of making the vanilla, cocoa, and cinnamon were too good not to write about so I decided to write a second and third part to the post. While we were on our tour, we got to see, feel, and taste each step of making these spices.

I think I want to share the cinnamon first. There are two types of cinnamon. The kind we are all familiar with that curls up into a hard stick is cassia cinnamon (Cinnamomum Cassia). The second is a ceylon cinnamon (Cinnamomum Zeylanicum). Cassia is a dark brown color with a harsh and flat cinnamon taste made from the outer bark of the tree. Ceylon cinnamon is a light brown, it flakes off and stays soft rather than hardens, and has a delicate and sweet taste. It is made from the inner bark of the tree. I thought it tasted like a mix or cinnamon with sugar and cardamum. Cinnamon naturally has a chemical called Coumarin which in high doses causes liver damage and other problems. (http://www.bfr.bund.de/en/faq_on_coumarin_in_cinnamon_and_other_foods-8487.html). Cassia cinnamon has about 5% coumarin compared to Ceylon cinnamon’s .004%. The reason Cassia is so popular is that it’s much more profitable because the plant grows faster and is easier to harvest. 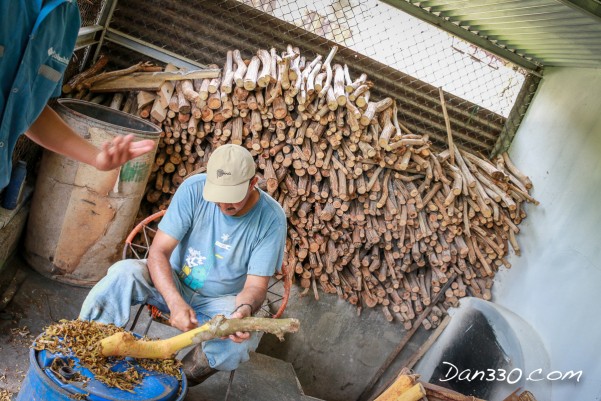 Villa Vanilla grows ceylon cinnamon. It is just a tree that grows in this climate and as you walk through the crops, you will see this tree hosting climbing vines like pepper and vanilla. When the tree is ready to be harvested, they simply cut it down and chop it into about 3 foot logs. The roots that are left wills sprout new tree growth so there is no need for growing samplings.

When the logs are cut, a worker simply takes a knife and removes the outer bark. 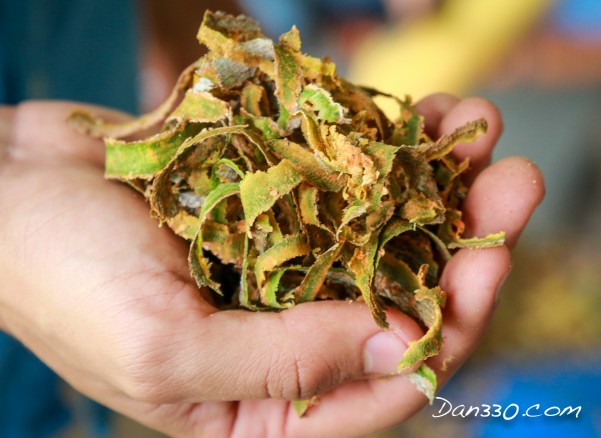 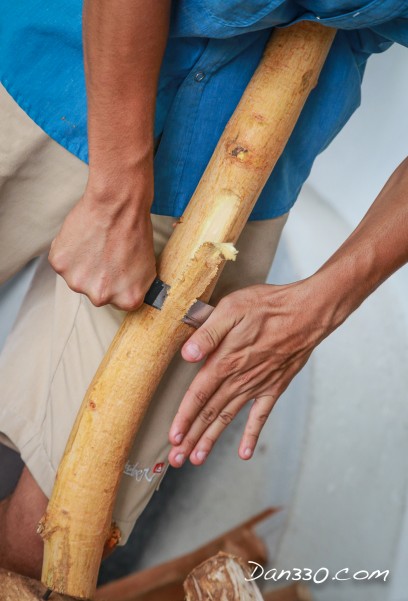 The taste of the bark is almost like candy. It is a sweet cinnamon taste and the bark isn’t even that woody to chew on. Of course, they can process this down to a powder as well. 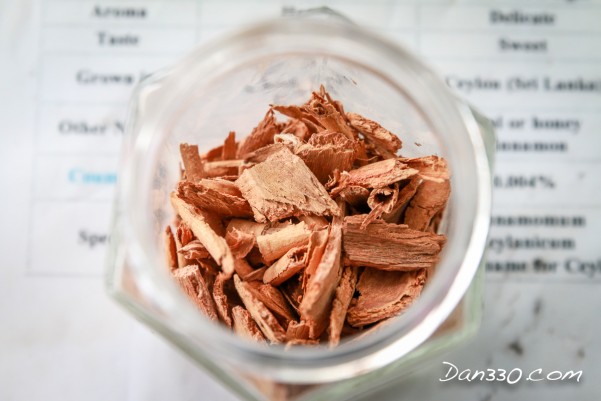 On our tour, they made us some cold cinnamon tea. To make it, they boiled the cinnamon bark in water and then let it steep. Ours was cooled and served ice cold. We all loved it. The sweet, cinnamon, and freshness was a marvelous refreshment contrasting the heat and humidity of Costa Rica. This was one of the products you can buy and take home with you, which of course we did!