Cruising on the Norwegian Dawn – Roatan

This part five of the series Cruising on the Norwegian Dawn.

Roatan is one of the Bay Islands off the north coast of Honduras in the Caribbean. While Cozumel was very flat geographically, Roatan is more like a long ridge sticking up through a barrier reef. The center of the island is quite high reaching 800 feet or more in places. Considering the island is only 31 miles long and about 5 miles wide at it’s widest point this makes for lots of interesting terrain.

We used to fly over Roatan when we flew from MSP to LIR (Liberia, Costa Rica). I always thought that Roatan was such an interesting looking island from the air.

There was a beautiful sunrise as the ship approached Roatan. I was up working on the computer and had the door to the balcony open and shot these pictures. Roatan is a beautiful island and this was a great start to our day there. 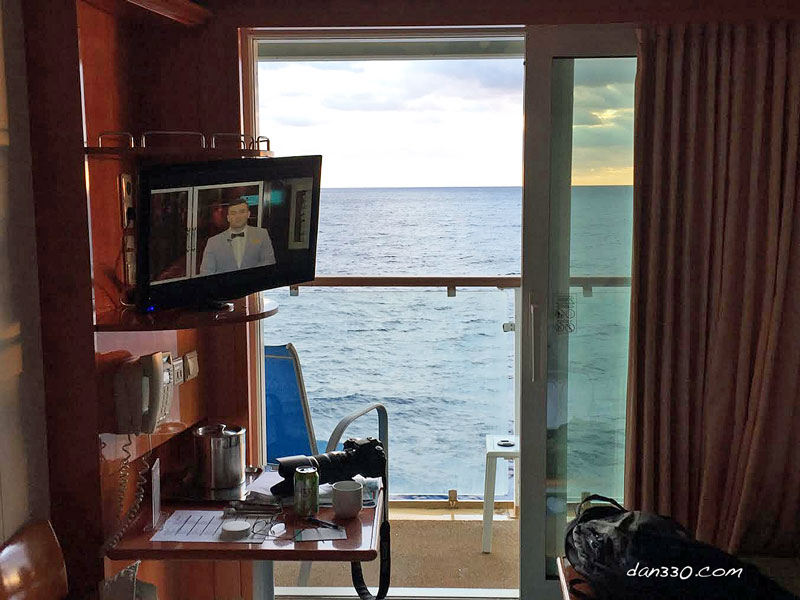 This is my work station in the cabin. I loved having the door to the balcony open. The camera was right there by the computer so I could hop up and take more pictures as the sunrise developed. A cup of coffee, internet, TV and fresh sea air, what else do you need?

The ship turned around the west end of Roatan shortly after sunrise. Our cabin was facing the island so we had a great view as we approached the port.

Just like in Cozumel there was an armada of small boats seemingly escorting the large cruise ship to port. 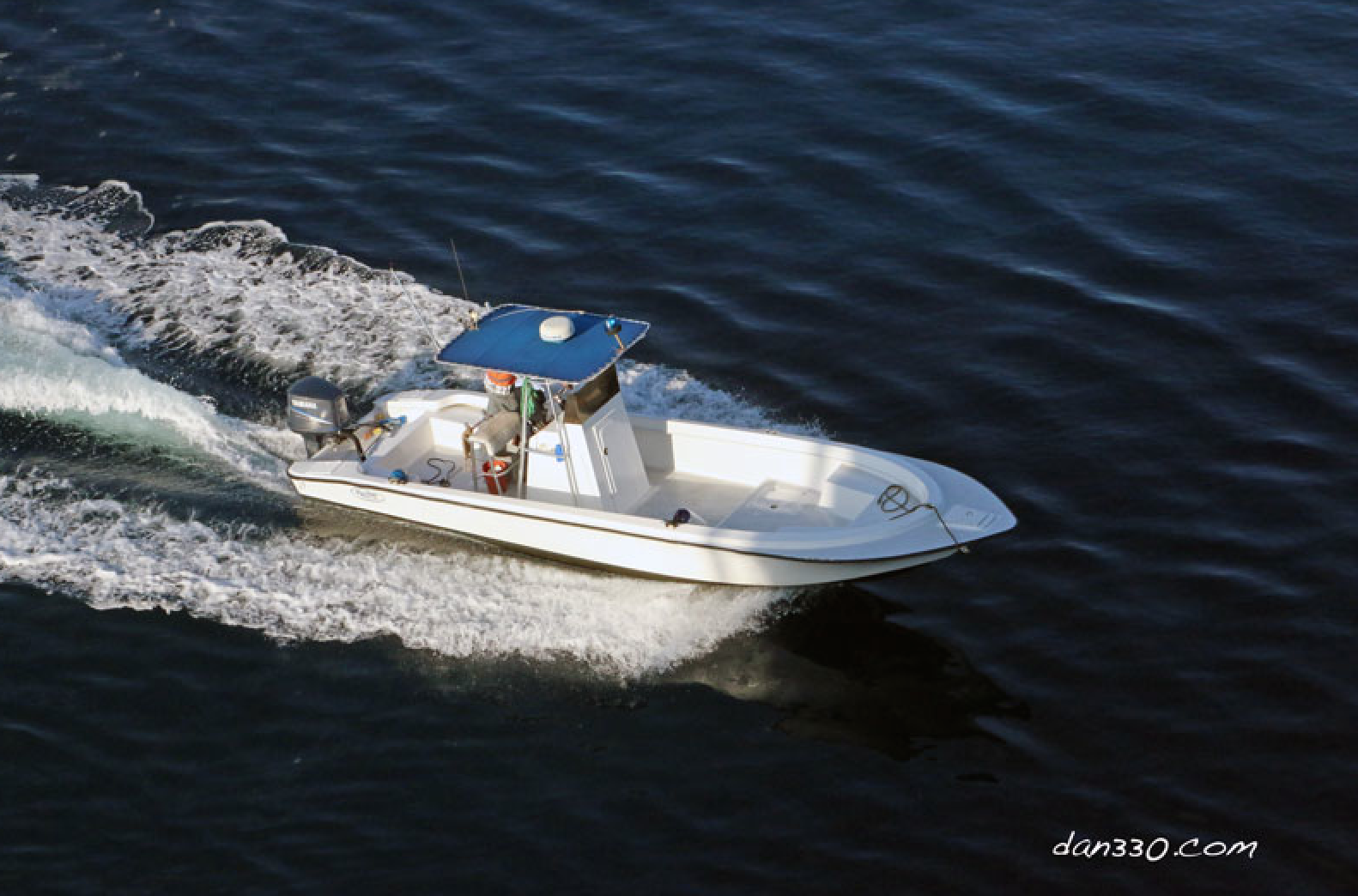 On our cruise the Norwegian Dawn parked at the pier in Coxen Hole. Unlike Cozumel, the pier is right along shore so there is no long walk to get to the pier terminal. Our cabin was facing shore so we got to sit on our balcony and watch the band and the dancers greeting the ship.

Since the last time we visited Roatan, a new Town Center has been built at the pier. This shopping area is also home to several independent tour operators. It is advised that if you do not go on a Norwegian hosted shore excursion, that you should only deal with vendors in this area. Once outside the port terminal area, you will find any number of people offering every service imaginable. Enough said. Staying with the cruise lines tours guarantees that you will be waited for in the event of a tour bus breakdown or other delay you didn’t count on.

As we did in Cozumel, Laurie and I had a nice breakfast on the ship and let everyone with tours etc get going first. We met a really nice couple from Hannibal, MO. These are the Cruse’s and they love to cruise! It seemed that every day they had a funny new T-shirt.

Having been to Roatan a few times, I really wanted to get out on my own and take pictures. My original plan was to rent a scooter like in Cozumel. The NCL concierge discouraged this. We did find a car rental agency that had a reasonable rate and a pretty new car. This turned out to be a very fortunate move. By the time we made it to the east end of the island, there was a little rain. By the time we got back to the west end it was an absolute downpour for the rest of time we were on the island.

Off we went to the main road which essentially follows the ridge down the middle of the island. Lots of great views if the weather cooperates.

Our first stop was the Iguana Farm. We had been there before but wanted some fresh photography. To say it is a farm is kind of misleading. The Iguanas are fun to see. Part of the admission is food to attract the big lizards. They are beautiful. It is fun to feed them but this only will kept my attention for a short time. Once we had iguana pictures, we walked down to the dock where there were tarpon in large pens.

After we were finished at the Iguana Farm we continued east. There was a restaurant on a ridge we remembered from previous trips that had a great view of the reefs and the aqua blue water. We went all the way to the end of the road on the east end of the island and back. We could not find it. But we did find and ark.

The scenery along the ridge road was really amazing with more great views around every corner.

Around one corner we came across this donkey. It had a lead but was not tied up. We saw him on the way back to the west end too.

After giving up on finding the restaurant on the ridge we headed back to west end. It started to rain and the closer we got to west end the harder it rained. We saw a sign for the Blue Harbor Tropical Arboretum. We had a hunch that we could do some indoor sightseeing there.

We were met by this nice young lady who gave us information about the arboretum and an umbrella.

We are going to do a whole post on this place so I’ll just show a few pictures for a tease for now. If you are not a beach person or if it is a rainy day, this place is a good option for you in Roatan.

After our tour of the arboretum we continued to West End. It was still pouring rain so we did not get many pictures.

I had hoped to take a bunch of pictures in the more popular tourist areas, but it wasn’t meant to be. The rain was not going to cooperate. We left West End for the West Bay beach areas. The rain let up as we got to the very western tip of the island. Unfortunately, it was time to turn the car back in and return to the ship. We followed the road along the south shore which lead us right to the pier.

All in all it was another great day. Had it not rained we would never have stopped at the arboretum so that was a plus. On the down side there was a lot of photos we thought we would get just didn’t happen. I guess we just have to come back again.

Here is a shot of Coxen Hole and the pier as we left at sunset.

The next stop is Belize City in the morning. You won’t believe what happened there.

If you are a beach or water person take the shore excursions that Norwegian has. It’s a lot less hassle and you don’t have to worry about a thing.

I would agree with the concierge and recommend that you don’t rent scooters here. The roads are narrow and there are a lot of trucks.

The beaches at West Bay are spectacular. Go see them.

If weather is an issue consider a visit to the Blue Harbor Arboretum. You do have to drive by the dump, but the arboretum is worth it.