A Visit to Yosemite National Park

Are you planning a A Visit to Yosemite National Park? That’s a great idea. We found Yosemite to be one of the more breathtaking national parks we have visited.

On this visit we were in San Jose for business and ended up with a couple of extra days so we added a side trip to Yosemite at the end of our trip. This is one of those places that deserve way more time than we budgeted so unfortunately we only did a high speed highlights tour.

Over the years I had seen Yosemite from the air while I was a pilot for a major airline. In fact there was an intersection (waypoint) we flew over on the way into San Jose called ELCAP. You guessed right, we made a turn pretty much right over the park so we often got a great view from the air.

Yosemite is a fairly remote park for being in a heavily populated state like California. It is about a four hour drive from San Francisco. We were surprised by the underwhelming highways leading to the park. Our visit was in October and pretty much in the off season. The summers must be really crowded on weekends.

Most of the visitors to Yosemite will be found in the Yosemite Valley. This is where most of the famous landmarks can be seen. It is also a hub for lodging, camping and hiking trailheads. I read that this valley makes up around one percent of the total area of the park yet this is where the vast majority of tourists will be found. Parking and traffic congestion is a real concern in the summer months.

We found the signage in the park confusing. Because of that we ended up parking in a remote parking lot and taking the shuttle. Our thought was that the shuttle we be a good way to see the landscape instead of driving. Not so much. You are in a valley and most of the things you want to see are up above you. In the shuttle you really don’t see much of anything. You have to get off which is what we did. October was not crowded so we drove our car around and had no trouble with parking at viewpoints.

I was really looking forward to seeing Bridal Veil falls from the ground. From the air it was spectacular so I was disappointed on this trip to find out that the falls had pretty much dried up for the season. Like other falls in the park this trip, Bridal Veil Falls was a victim of late season drought conditions.

While the Yosemite Valley is where the lodging and other guest services are located, you need to get out of there to see the famous sites. If you are not a hiker or have the time, we strongly suggest driving to Glacier Point during your visit. It is a long and winding road but well worth it for the views you get. This road closes around late October and reopens in May so plan accordingly.

The very best overlook is at the end of the road. There is a great view of Half Dome as well as down into the valley.

You can see by the shadows that it is getting late in the day. We had to take a few last pictures and head down to the valley to find lodging for the night. 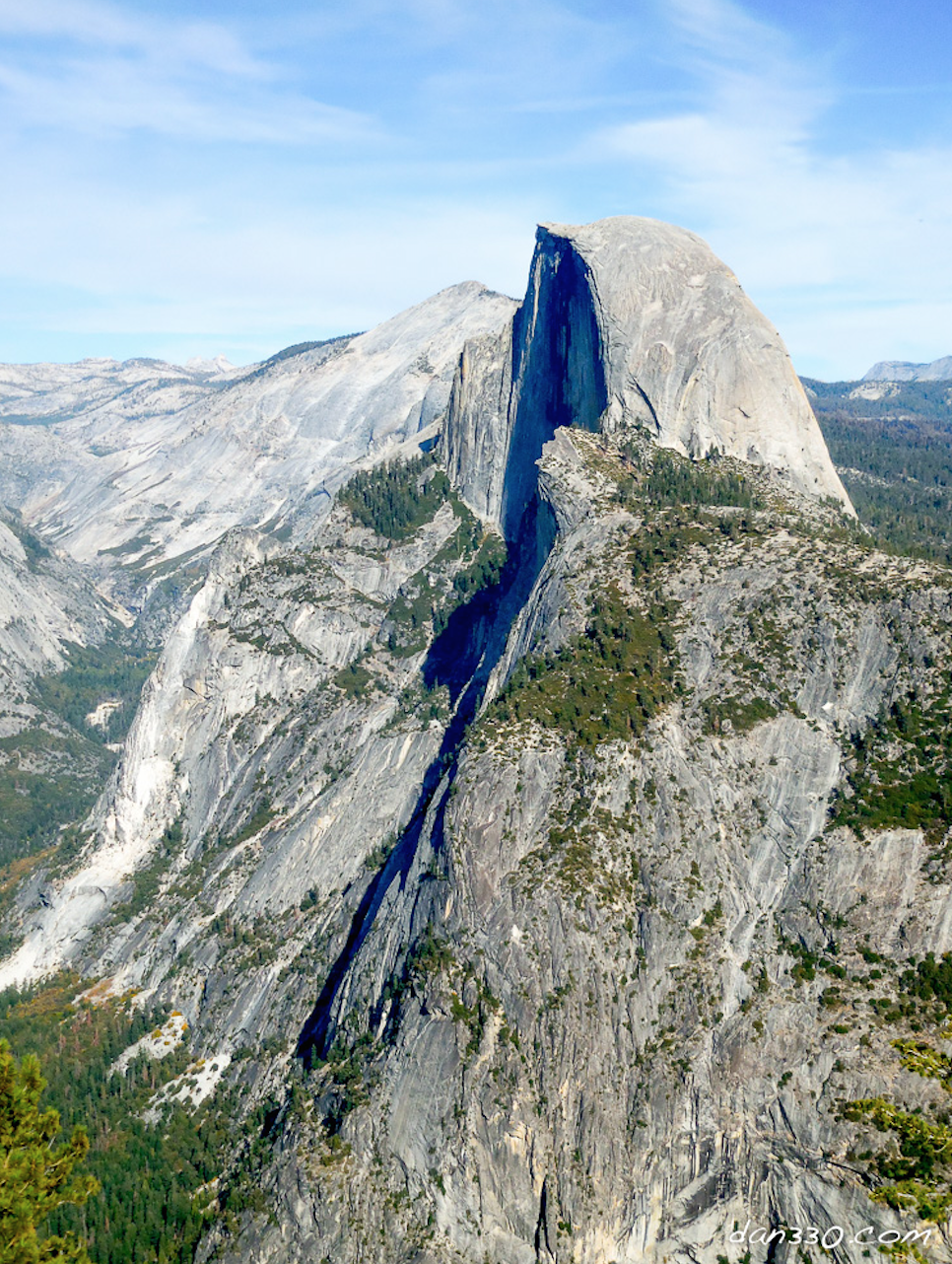 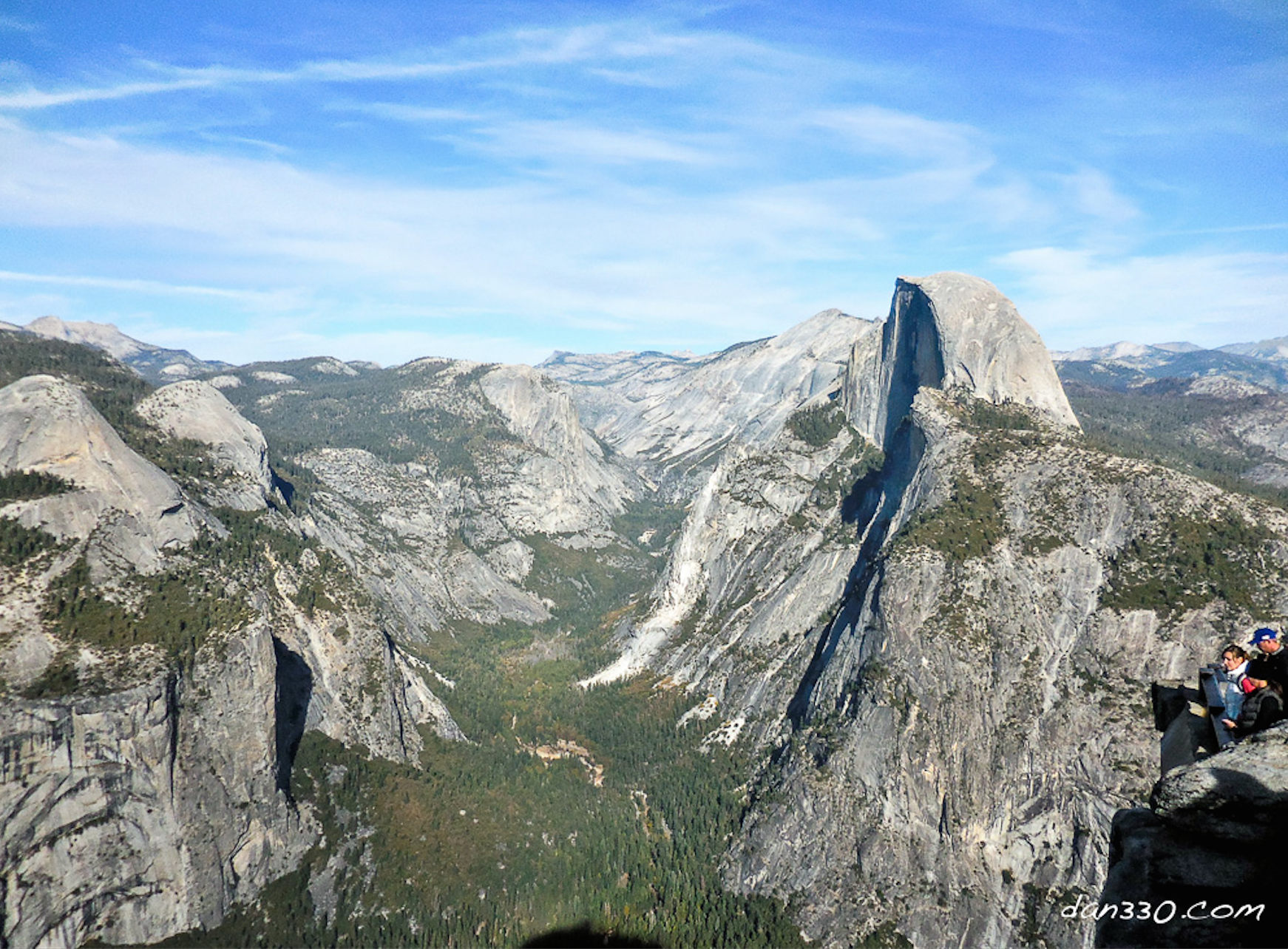 Unfortunately for us there was very little availability in the Yosemite Valley that night so off we drove looking for a hotel that would not break the bank. It was a long drive but we found a room.  Once we got out of the foothills we found lots of good rooms at a reasonable rate.

If you plan on visiting Yosemite during the summer. Plan ahead. Book a room in advance or be prepared to pay a ton of money or do a lot of driving back and forth from the park to your room.

Your cellphone may not work here. Don’t plan on it.

If you have a flexible schedule visit during the off season during the week.

This park is open year round. Not all the roads are open in the winter. Some roads may be closed due to snow so always check ahead with the park service.

Give yourself some time to explore this amazing park. One day just is not enough time.

For more about the Dan330.com Travel section click HERE.

To visit other national parks in the series click HERE.