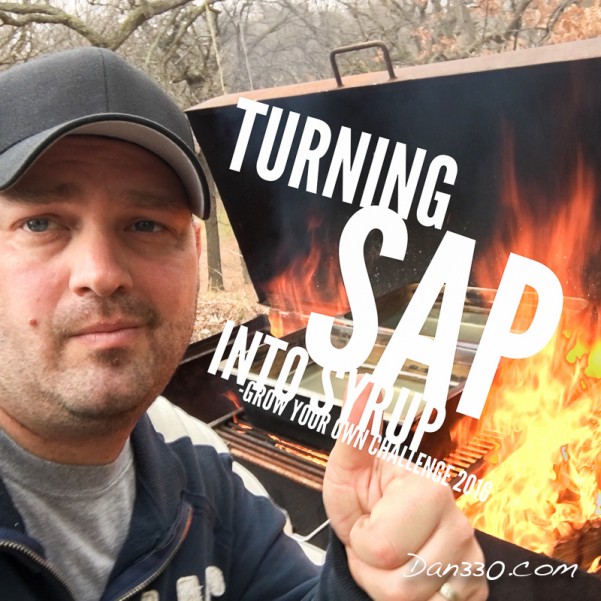 If you are following along in our series “2016 Grow Your Own Challenge,” you know we have been tapping trees and collecting maple sap. Today, I am going to show you how to boil the sap down to make your own homemade, DIY maple syrup and the taste is going to blow your mind.

If you like tv, you can just watch the quick video here. Otherwise, read on…

As you know, this is my first year making DIY maple syrup. But I was assured it wasn’t that hard, and I could easily do it. Well, it wasn’t that hard, it just takes hours of work. If you like watching water boil or paint dry, this process is right up your alley. Here’s what I learned:

First, don’t go all “oooh, that fire is too big.” Impossible. You could do this over a burning house and it would be fine. I started my tasteful little project like this:

Cute, huh? Well I went to bed in the wee hours of the mourn’ because what I needed was a fire like this: 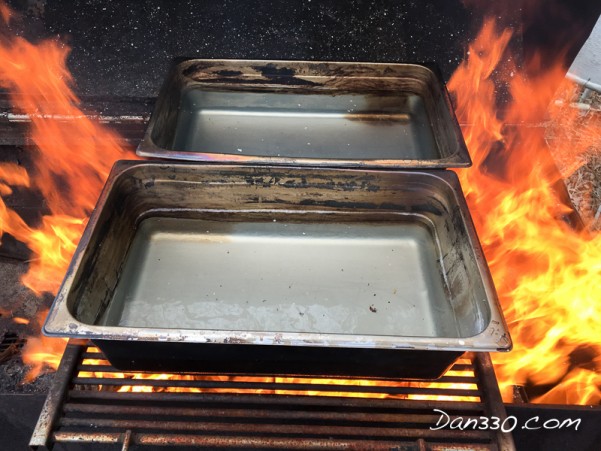 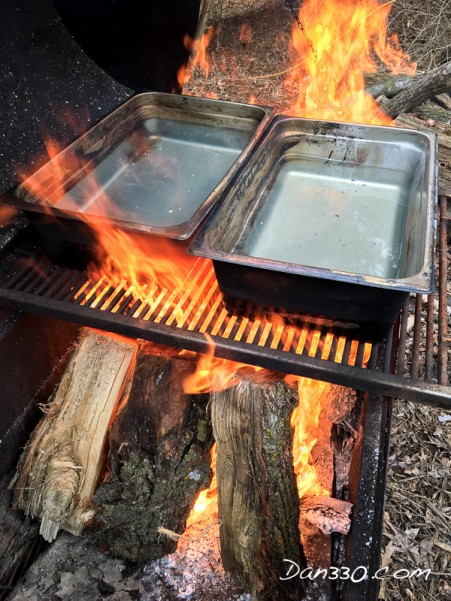 This was day 2 of boiling the sap. Much better. Find and cage a dragon below your pots, it makes the job go a lot faster. I got to enjoy dinner this day.

Here’s a periscope of me getting the fire and sap ready for this boil.

I was collecting sap using a cooler to transport it easily between the trees and my fire. This is what it looks like when it comes out of the tree. The lid on the cooler kept it from sloshing out of the cooler and the handles made it easy to carry or move in the back of a car.

Keep dumping your sap into the pans as they boil down. Eventually, they will start to look thicker and a little darker. I was really surprised by how gross the sap looked. It was foamy, cloudy, and had white chunks all over it. The first time I tried, I serisously thought I messed it up.

Using a candy thermometer, you can measure the temperature of the sap. It will top out at 212 degrees as long as there is water in it. When the temperature rose above that, I pulled it indoors to finish it on a stove. (many of the blogs and articles I read say to heat it to about 119 degrees then bring it in to finish). Tap My Trees, and the Minnesota DNR were good resources to help you out.

The first thing I did was pre-filter out all the gunk from the sap trays through a coffee filter. See how gross and cloudy the pot on the left is? I scooped out this and ran it through the coffee filter into the pot on the right. This took care of the majority of the cloudiness. 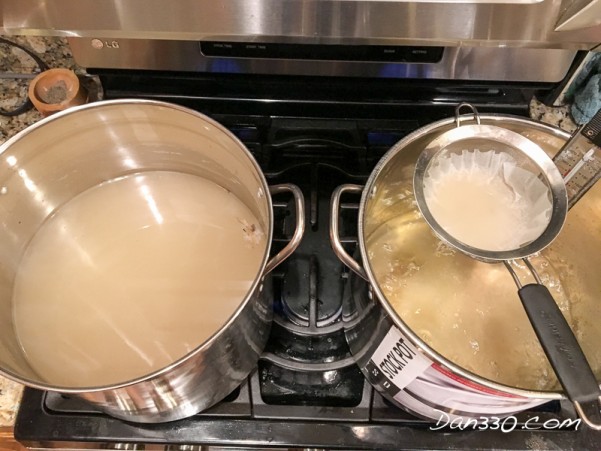 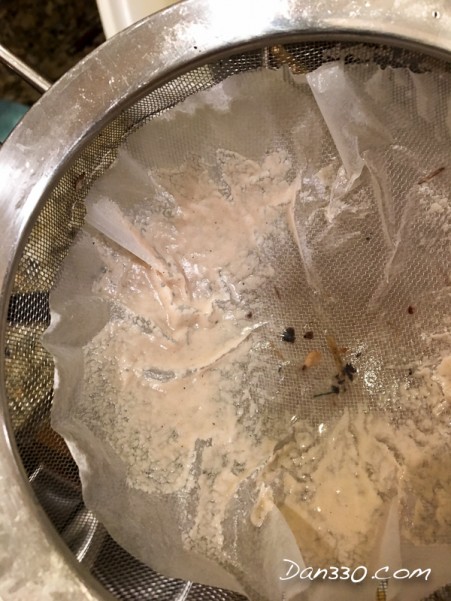 I continued to boil it down and the temperature rose to about 221 degrees on my thermometer before it was ready. 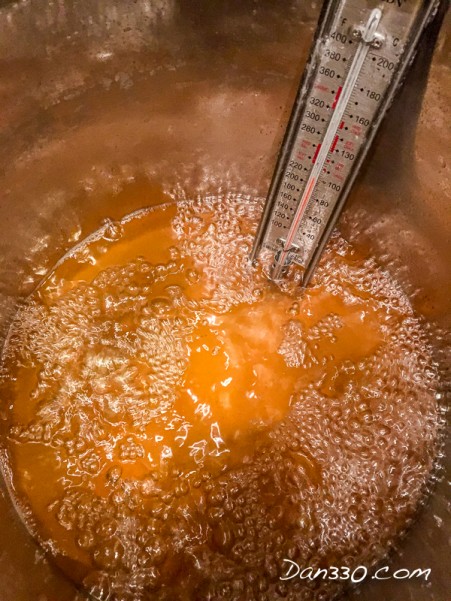 My friend and advisor told me to get a hydrometer to check the maple syrup density. I bought one at a local store for about $15. It was very easy. It was designed for maple syrup and had two marks on the scale, one to measure density when the syrup is hot, the other when it is cool. Just keep boiling the syrup until the hydrometer measures to the hot mark. 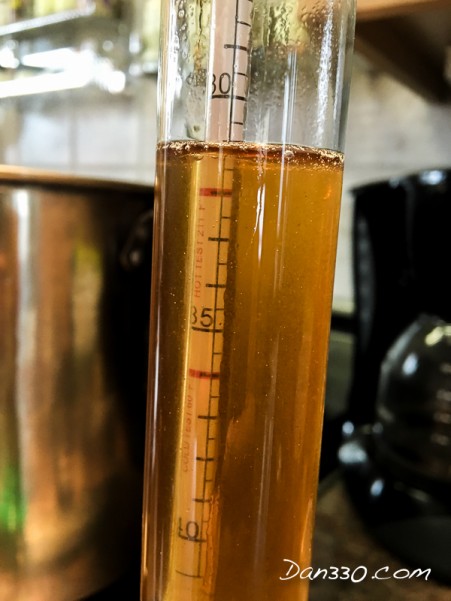 When the syrup is the right density, it is time to filter and can your syrup. By the way, if the density of the syrup is too think, you run the risk of it crystalizing in your cans, and if it is too thin, there is too much water in it and you risk mold, yeast and other bad stuff growing in your bottles. So this is an important food safety part of the process. I highly recommend you read the MN DNR or a food safety sheet on making the syrup.

I wanted to show you why you need to filter the syrup after processing it. This bottle was bottled right after boiling and was only pre-filtered using the coffee filter. What you see settled on the bottom is sugar sand; hardened minerals that naturally occur in the tree sap. 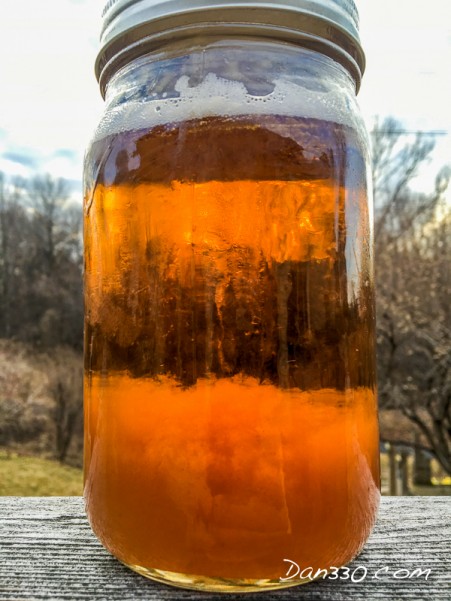 Kind of gross, right? I re-processed this with the next batch and ran it through the filter. First, take your boiling hot syrup that you have already tested with the hydrometer and pour it through a syrup bag. I also got this from a local store, but you can find syrup filter bags all over the internet.

The key is to pour the syrup hot so it flows. If the temperature drops below 180 degrees during filtering, just re-heat if to between 180 and 200 degrees before bottling. If you heat it above 200, you run the risk of making new sugar sand. Here’s a great pdf on how to use and care for a filter bag.

All we had to do to start the filtering was to hold the bag above a pot, then pour in the syrup. 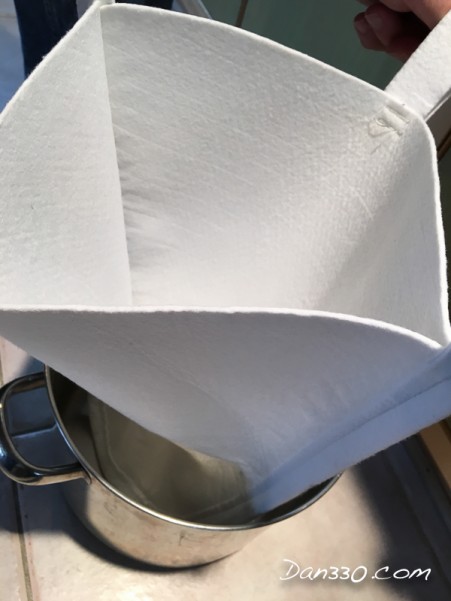 You can see for yourself how it worked. It took about 10 minutes for our pre-filtered syrup to make it through the bag. By the way, it did catch all of the sugar sand I showed you earlier. This is what the new bottles looked like: 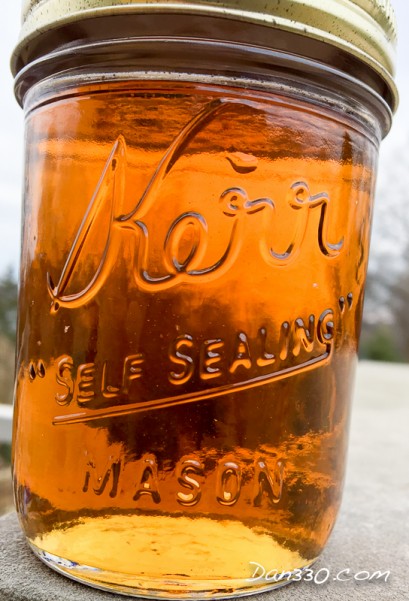 I was able to get about a gallon of syrup from the first run of sap of the year. It was a marvelous thing. Now to keep my kids from using it all on their Eggo waffles… My kids are eating all my DIY maple syrup. What’s up with that?! 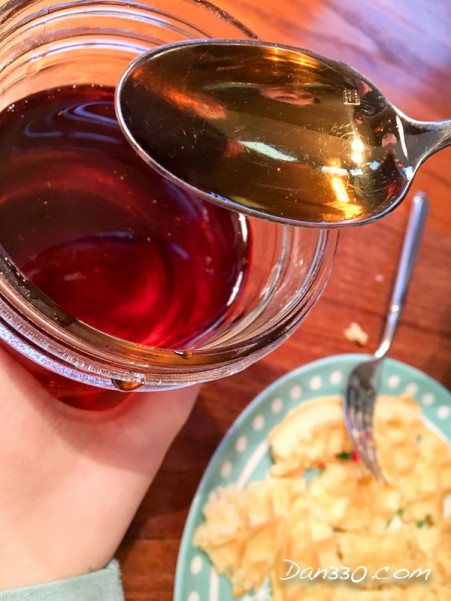