You may have seen our viral video with Laurie from dan330.com harvesting the potato towers from last year on YouTube.

This year, we decided to add more towers to the garden. The design is very simple. It reduces the square footage of the garden, makes the potato plants stack vertically, and requires no digging to harvest.

How to Build Your Potato Tower:

Start by pounding four steaks into the ground in a circle about 1.5 to 2 feet across.

Then, take the some fencing and wrap it around the posts to make a cylinder.

Start by adding a small amount of straw on the bottom. Then add some dirt in the middle. Place your seed potatoes on top of the dirt. 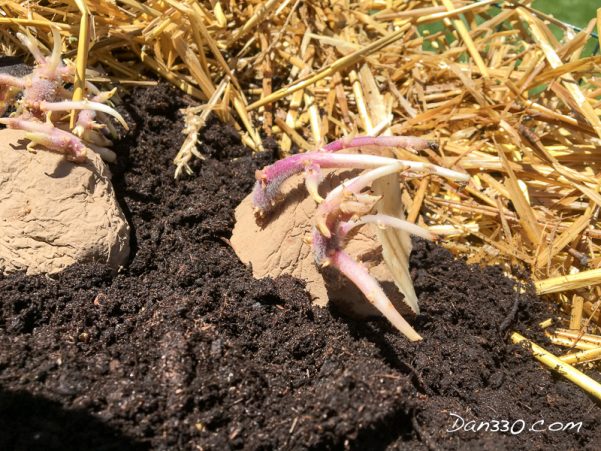 A seed potato is really just an old potato that is starting to sprout. It can be cut up into chunks with an eye for each piece. This will be enough to start a new plant. Potatoes from your grocery store may or may not work. They are often sprayed with an inhibitor so they don’t sprout at the store; which obviously would not be good for your garden. You can buy seed potatoes at garden centers. We really like the nice people at Seed Savers in Decorah, Iowa. They have lot’s of variety too.

Add several layers of the straw, dirt, and seeds until the tower if full. Top if off with some straw and water. Soon you will see sprouts coming out of the tower and your potato plants are on their way to a bountiful harvest in the fall. Make sure that you pack down your tower gently as you build it. The straw and dirt inside will settle all summer long as the straw decomposes. Our towers were packed tight to the top of the tower. By early August the inside of the tower had settled down to about one half to two thirds the height of the fencing. 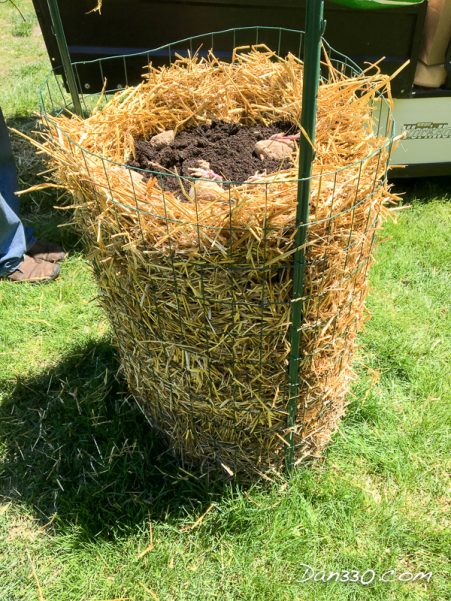 Each one of the towers will produce between 50 and 70 pounds of tomatoes and only started with about 15 pounds of seed potatoes. You can see the progress later on in the series. Just click the series link above and look for the potato tower update.

Here’s one tip for a successful tower: watch your plants. You may need to soak your tower with a hose to make sure the lower levels of the tower are hydrated properly. Just like in a traditional garden, the plants leaves will wilt as they dry out. The good news is that Potato towers retain water really well with all the straw and really low maintenance.

When your potatoes are blooming – you are making potatoes! Keep them hydrated. 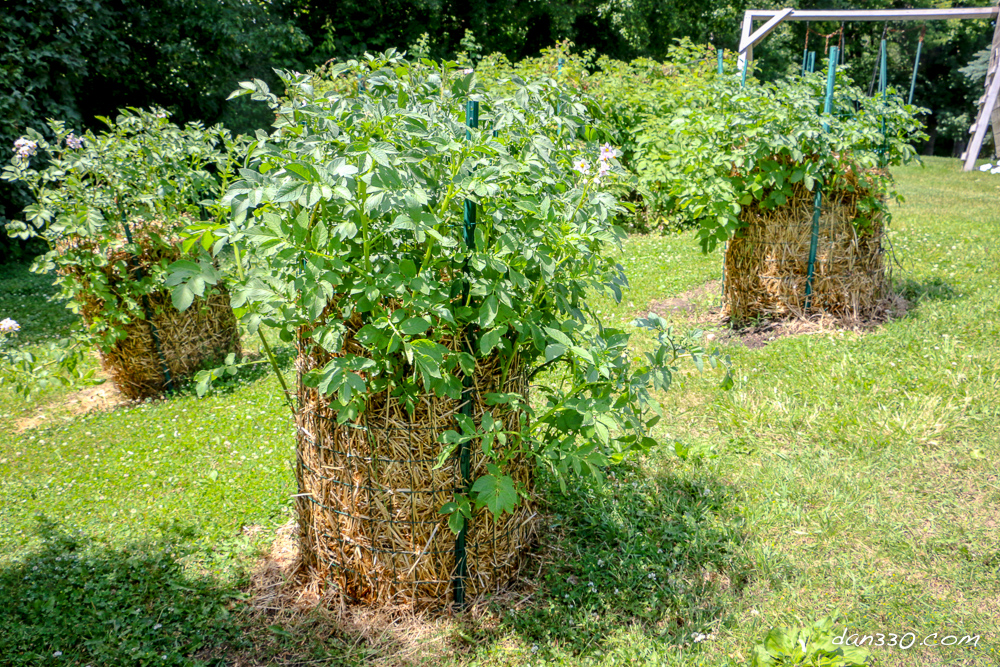 We planted several potato towers this year. They are easy to build and once planted are fairly low maintenance. Another nice thing about the towers is that they don’t take up too much space in your yard or garden. We spaced them far enough apart so that mowing the lawn was easy.

Potato towers are awesome. Watch the video above. It is raw and unrehearsed of Laurie digging into the one tower we had planted last year. The video did well because I think we captured the joy of gardening.

Do you have a gardening tip to share? Submit your posts HERE.