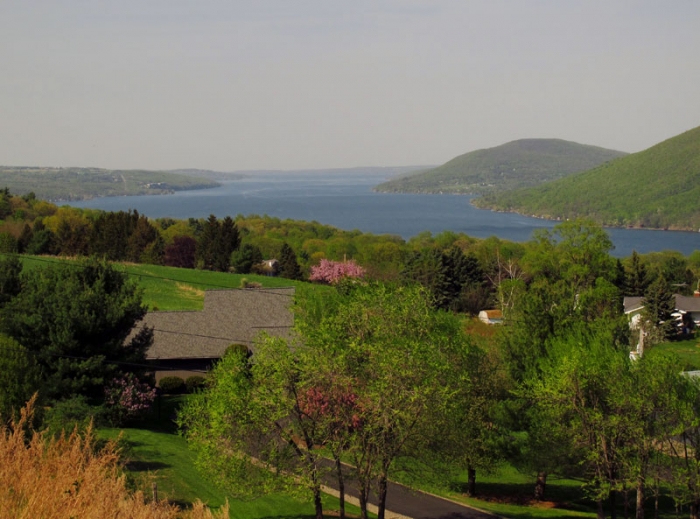 Stretching out in a low wooden lawn chair at the edge of Canandaigua Lake, I watched boats head out toward Squaw Island and ducks paddle around before heading out sightseeing for the day.

It was a lovely day, and as much as I wanted to explore upstate New York, a region I’d never been to before, it was hard to pull myself away from the beautiful lakeside setting.

Canandaigua Lake is the fourth largest of New York’s famous Finger Lakes, 11 long, narrow, side by side lakes, that were carved out by glaciers, reminding early mapmakers of human fingers.

Canandaigua is a Seneca Native American word meaning “the chosen spot,” a name that remains appropriate since this breathtaking area is now a popular vacation destination.

For a few days last spring, friends and I met at the Inn on the Lake on Canandaigua and traveled around to see what makes the Finger Lakes area so popular. Much of it is rural — dairy farms, gentle hills and old homes. We stayed mostly along Routes 5 and 20, as the highway is known to locals. It is the main road between Buffalo and Albany.

Owner Mark Gilbride and his wife had 58 alpacas with eight babies, called crias, on the way last year. They own 14 acres and rotate the animals through 10 pastures. Electric fences protect against coyotes, and the alpacas are sheered once a year.

Our next stop was Wizard of Clay Pottery in Bristol, where we were mesmerized as we watched owner Jim Kozloski turn pots on his wheel. He goes through 100,000 pounds of clay a year to make colorful bowls, pitchers, planters and vases with nature themes. Many are on display in his workshop or stored in the woods. The Bristol Nature Trail runs through the property and looked tempting, but hunger pangs triumphed over a long hike in the woods.

Lunch was turkey with all the trimmings at the Holloway House, with its big fireplace and white tablecloths.

Blacksmith Peter Holloway established the place as a wayside tavern in 1808 in East Bloomfield, so weary travelers heading west could eat and rest while drivers changed horses. I wondered what it was like to stop for a good meal after a dusty, bumpy stagecoach ride. If the food was even close to our delicious meal, those early travelers must have left the Colonial-era house refreshed and ready to resume their journey 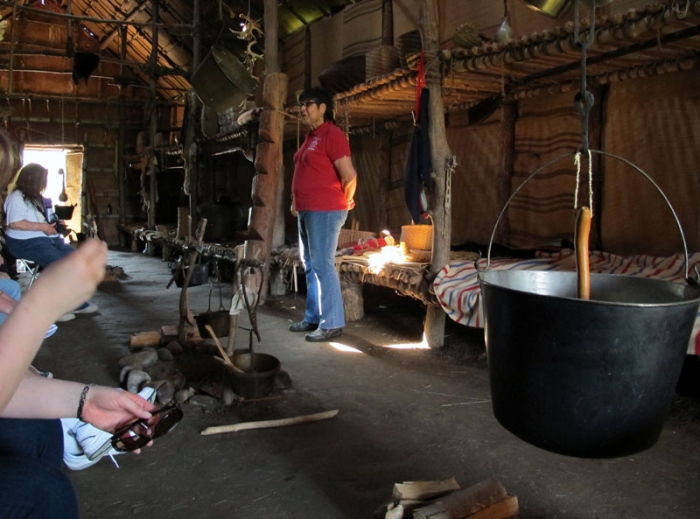 The Finger Lakes area was the home of the Seneca tribes, and Ganondagan Native American State Historic Site was the location of the largest Seneca villages in the 17th century.

Ganondagan is on the National Register of Historic Places and has the only full-sized replica of a Seneca bark longhouse, where members of the tribe lived centuries ago. The Seneca were known for their innovative farming practices and cultivating corn, beans and squash.

Inside the longhouse, we sat on beds made of tree branches covered with blankets while Seneca tribal member Ronnie Reitter, who is in her 50s, told us how 50 to 55 people once lived in a house like this. In pioneer times, she said, the Seneca traded furs to the British and French for fabric, which was much easier for making clothing than preparing deer skins. They also traded for guns, ammunition and metal pots, which were more durable than those made of clay.

She also spoke of a Native American god who sent his son to bring peace among her people — a familiar story in other religions.

The new Seneca Art and Culture Center at Ganondagan is a permanent, year-round interpretive facility that tells the more than 2,000-year-old story of the Seneca and their contributions to art, culture and society. The contributions include the Iroquois White Corn Project, which takes old seeds that are very high in protein and laboriously grows them by hand, the old way. We munched on cookies made of this white corn flour, and I bought some to take home to my daughter, who enjoys baking. 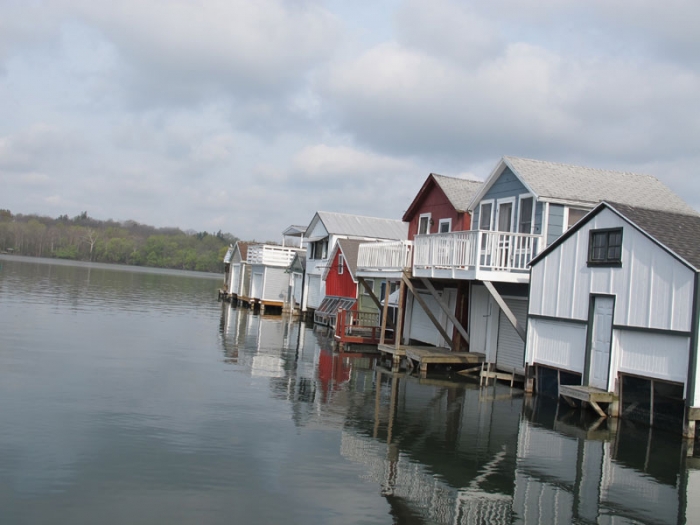 There’s nothing more relaxing than a boat tour. So on a beautiful sunny afternoon, we headed to Seneca Lake, the largest of the Finger Lakes, for a boat ride to the mouth of the Cayuga-Seneca Canal. The canal, which was dug largely by Irish immigrants, leads to the Erie Canal. From there, travelers can go all the way to the Atlantic Ocean.

Like to visit wineries and sample local wines? The Finger Lakes area is New York’s largest wine-producing region with more than 120 wineries and vineyards located around the lakes. The warm, breezy summer days help ripen the grapes before the frost.

This world-class, wine-producing region specializes in Riesling and Gewurztraminer, but is now starting to offer Cabernet Franc and Pinot noir as well. There are plenty of opportunities for wine sampling.

For a hike in a small, serene park with waterfalls, trees and a creek, put on your water shoes and walk through the running water of Grimes Glen Park and climb around the slippery rocks. In nearby Naples, enjoy a leisurely and delicious lunch at Kismet New American Bistro and then check out Monica’s famous grape pie. 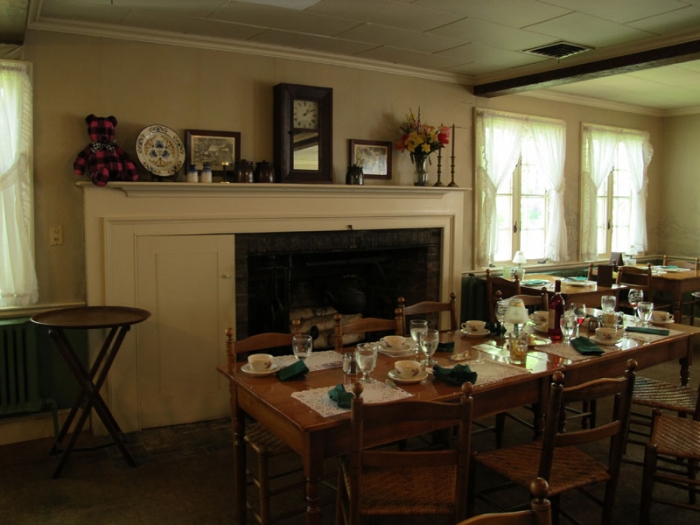 If you enjoy visiting historic mansions like I do, here are two very different ones. Belhurst Castle overlooking Lake Geneva, another of the Finger Lakes, is a stone mansion in the Romanesque Revival style that now serves as an inn but was a speakeasy during Prohibition. The dark stones give it a spooky appearance and it is rumored to have a resident ghost. It is listed on the National Register of Historic Places.

Sonnenberg Gardens and Mansion State Historic Park at Canandaigua, a 19th-century, 40-room Queen Anne-style mansion, is also listed on the National Register of Historic Places and once was the summer home of Frederick Ferris Thompson, a prominent banker in New York City, and his wife Mary Clark Thompson, whose father was the governor of New York in 1855. The mansion is also known for its bright period gardens, which are lovely to view from the windows or patios.

Finally, I tried my hand at painting the picturesque boat houses at the end of a pier on Canandaigua Lake, the same boat houses I could see from the wooden chairs at the edge of the water where we sat to watch the boats and ducks.

If you enjoy history and lovely scenery, wineries, rivers and lakes, then the Finger Lakes area of upstate New York truly is a spot worth visiting. 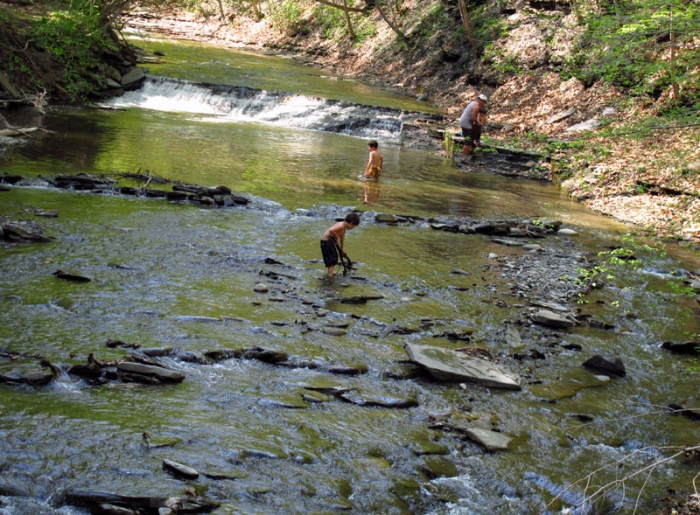 For more information about what to see, where to go and where to stay, go to www.fingerlakestravelny.com.