Reasons Why You Should Visit Montenegro: The Heart of the Mediterranean

An exotic, hidden pearl located in the Balkan Peninsula, Montenegro offers breathtaking surroundings and stunning sights. Its exotic nature will leave you breathless and feeling as if you need more. There are just so many things that this small country has to offer, from an authentic old world cultural experience, to modern luxury resorts overlooking pristine beaches. Here are some of the most popular attractions for you to enjoy while vacationing in this incredible country.

Take a sailboat excursion to what is arguably the most beautiful bay in the world, the Bay of Kotor. Situated in the southernmost part of Montenegro, the bay is a protected UNESCO World Heritage site. It is made up of the Gulf of Herceg, the Gulf of Tivat, the Gulf of Kotor, and the Gulf of Risan. There are several great tourist boats in operation in the bay that can give you a very unique experience just off the shores of Montenegro. It’s just not possible to get a feel for Montenegro’s incredible coastline any other way that on the water. 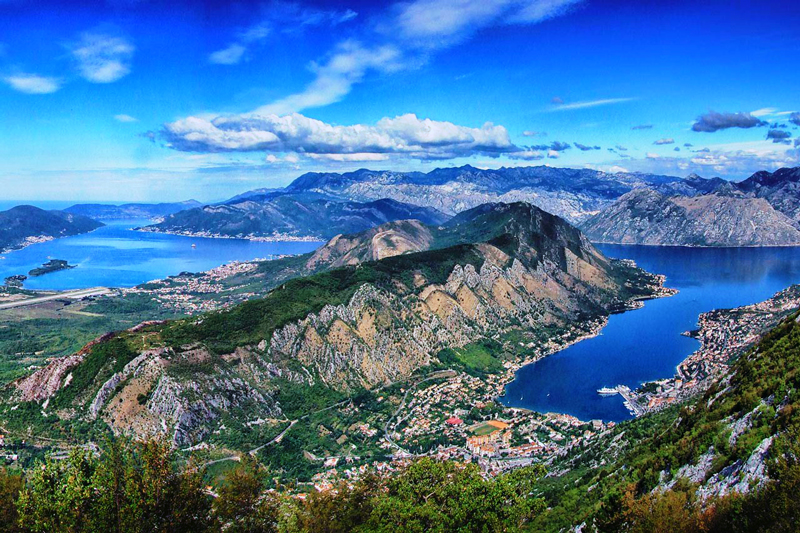 One of the most prosperous regions in the area is Tivat. It is accessed via Porto Montenegro, a luxurious port for yachts between 12 and 150 meters long. It’s very exclusive, offering berths to accommodate yachts belonging to some of the world’s wealthiest people. The port does provides repair services and can even perform a complete boat refit, should you have the need.

The prestigious village offers a variety of accommodations to satisfy even the most discerning of people, as well as upscale restaurants, modern gyms, and athletic centers. There are numerous events organized every year throughout Porto Montenegro where you can find additional entertainment. Events differ depending upon the time of the year. 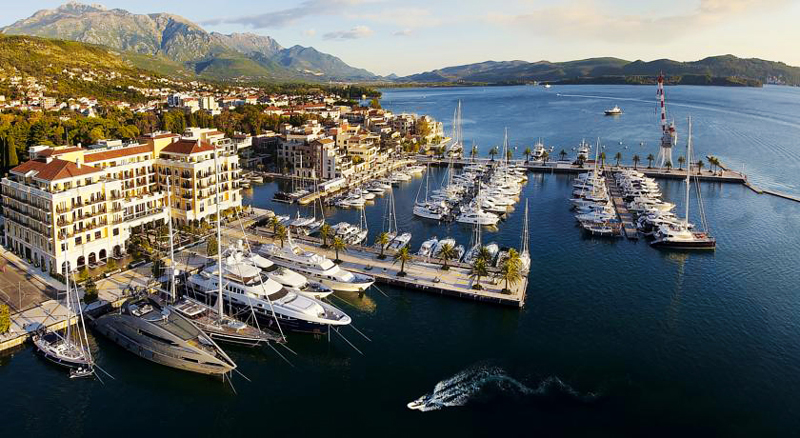 Montenegro is home to three of the most spectacular beaches in the Mediterranean, the most stunning of which are located in the villages of Budva, Sveti Stefan, and Petrovac. The medieval town of Budva is the center of Montenegrin tourism, and one of the most popular destinations for visitors. It is famous for its beautiful, sandy beaches: Mogren Beach, Jaz Beach, and Richard’s Head. You’ll find an abundance of luxury hotels there, and a very active nightlife. It is 2,500 years old, the oldest settlement on the Adriatic Coast.

Be sure to have your camera and an extra battery on hand to take photographs of the beautiful Island of Sveti Stefan. The town of Sveti Stefan was founded in the 15th century and built upon the cliffs of the rocky island. It’s most notable features are its recognizable tower, particularly narrow streets, quaint shops, and small churches. The Island itself is no longer open to public visitation, however there are numerous nearby beaches that provide wonderful places to take in the scenic beauty of the island from afar. 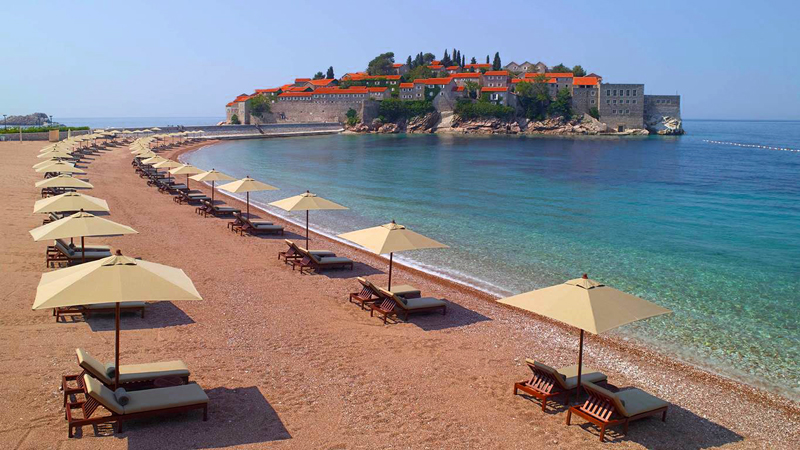 Petrovac is a small coastal town in Montenegro famous for its 600 meter sandy beach. It is a very popular summer beach destination. Guests at the beach resort enjoy some of the most serene surroundings there, where the sun shines 300 days out of the year. The beaches are bordered by beautiful forests filled with birds and other wildlife. The mild climate makes it perfect for growing olives, lemons, and oranges, which you’ll spot growing everywhere around the town.

After you’ve finished sunbathing in Petrovac, head over to Bar, a major seaport town located on the coast south of Montenegro. Because of its location, it is also one of the sunniest Mediterranean towns and is famous for the diverse fauna and flora found in the area. The most remarkable feature of the area is the innumerable maquis, beech, and oak forests, and citrus fruits that grown in the area. The Old Olive of Mirovica dates back to biblical times, and at over 2000 years old is such a unique specimen that it was placed under state protection in 1957. It is recognized as one of the eldest olive trees in Europe. 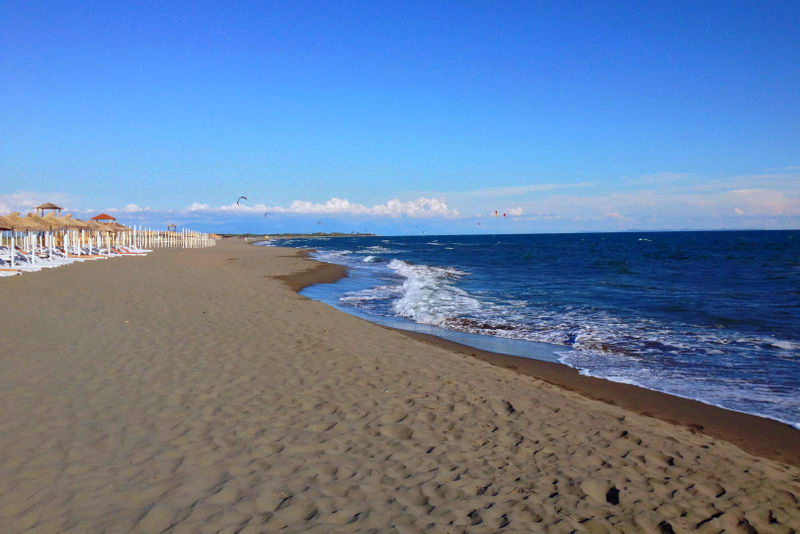 There are many more attractions to capture your imagination in and around Bar such as the ruins of Old Town, the Bar Aqueduct, various churches and monasteries, and the pristine beaches of Dobra Voda, Canj, Sutomore, and Skadar Lake. For nature lovers, there are various rare birds, fish, mammals, reptilians, and invertebrates inhabiting the area. Bird watchers in particular, decide to return many more times in order to attempt to observe and catalog the amazing variety of birds to be found there.

The last stop along the Montenegrin coast is Ulcinj, located at the most southernmost tip of the country. It is the center of the Albanian community. It is very popular with tourists in the summer and fall months, who enjoy spending time at its three beaches, the 12 kilometer long Velika Beach, the pebble beach Ladies Beach, and Mala Plaza. Sasko Lake is another location popular with birdwatchers because of the high number of migratory species that visit the lake every year.

Ulcinj is famous for its amazon mosques, Pasha’s Mosque and Sailor’s Mosque. It is also the home of St. Nikola’s Church, a popular attraction for tourist for its Christian artwork. All three of the religious centers are popular locations for pilgrimages and religious festivals.

Located in the Heart of Montenegro is the National Park Lovcen. It is considered a sacred mountain with geographical, historical, and poetic significance. Located in the northeastern part of Montenegro, it connects the Adriatic Sea to the continent. It is a popular place to visit for climbers, who love the challenge it presents. The two most popular peaks to scale, Stirovnik (1749 meters) and Jezerski (1657 meters) to scale tower over Lovcen and the Bay of Kotor. At the top of Jezerski is a magnificent mauloleum dedicated to the honor of the ruler, poet, and philosopher, Petar II Petrovic Njegos.

Lovcen was declared to be a national park in 1952. There are many rare plant species including four that are found only within the boundaries of the park. People from all over the world visit Lovcen to view the fauna, traveling along the snake-like roads that are an architectural phenomenon themselves. Along the route you’ll enjoy viewing old farm homes, churches, and Ivanova Korita. Once you arrive at the top of the mountain, you’ll have a breathtaking view of the Bay of Kotor, the northern mountains, and Skadar Lake.

Njegusi, known as the “emerald valley,” is where Petar II Petrovic Njegos was born. It is considered the seat of the Petrovic Dynasty, the family that ruled the country from the 18th through the 19th centuries. It is located on the gentle slopes of Lovcen Mountain and can be reached via the serpentine roads from Cetinje. Visitors to Njegusi enjoy the view from Krstac, the point of entry into the village, where the Bay of Kotor and the setting sun combine to form one the most romantic of sunsets. The village is known for its traditional cuisine like ham, or prsut, and cheese.

By far the best way to really experience the Montenegrin people, and their history and culture, is to visit Cetinje. It is such an important cultural center to the Montenegrin people because of the volume of relics from their history that is located there representing both the historical and the royal capital of the nation. Additionally, the official residence of Montenegro’s president is located there, and it is considered to be the orthodox religious center.

Cetinje is shadowed by the picturesque beauty of the mountains of Lovcen, creating a serene ambiance that attracts visitors from all over the world. There are many attractions to visit within Cetinje, including the Cetinje Monastery, Vlaska Church, Biljarda, the Zetski Dom-Royal Theater, historic foreign embassies, and many museums. Lipska Pecina is recognized as one of the largest caves located in the former Yugoslavia. The printing house of Crnojevici remains in operation, and is a testament to the rich publishing history of Cetinje. There you’ll be able to learn the history of publishing in Montenegro, and how it helped to shape the nation into the place that it is today.

There are so many more wonderful place to visit and things to do in Montenegro that it would be impossible to include them all. Once you’ve visited you’ll want to return to discover more of this beautiful country, so rich with history and culture. The Montenegrin people are some of the warmest, most welcoming people, who will be happy to advice you on additional places ways that you can experience Montenegro.