Now owned by the city of Louisville, the Belle of Louisville was designed to be a ferry and freight vessel but was later refitted as an excursion boat. Completely paddlewheel-driven – visitors can watch the steam-driven paddles move rhythmically back and forth in the engine room — the boat was able to travel on nearly all navigable inland waterways in the nation. It is the oldest operating Mississippi River-style steamboat in the world and a National Historic Landmark.

In its early years, it hauled cotton, lumber and grain from Memphis. During World War ll, it was outfitted to push oil barges and then became a USO nightclub for soldiers stationed along the Mississippi. By 1962 it had fallen into great disrepair whenJefferson County Judge Marlow Cook bought it at an auction for $34,000. Then it was completely restored.

Besides lunch and dinner cruises, the Belle of Louisville offers a concession café and full service bar for guests choosing the sightseeing-only ticket. Next year special birthday events will be held.


For more information go to http://www.belleoflouisville.org. 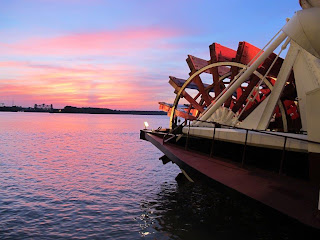 And don’t forget to check out our interactive travel map: http://travel.livedan330.com/
1 2