After a good nights sleep  in Ste. Genevieve, it was off down highway 61 and then along highway H. Our plan was to cross over to Illinois at Chester which is just south of Ste. Genevieve on the Illinois side of the river. Then we wanted to take highway 3 down to Cairo, IL.  A couple of wrong turns, a closed highway H and a long detour that led us back to the freeway on the Missouri side put us on plan B, ride the freeway and high 61 to Cape Girardeau.

This is a very nice river town with another well preserved historic downtown. Sadly what has become the norm as we head south is that all the old river towns that were built down on the river banks now have huge levees in place to prevent flooding. The levees also block the view from town. We had lunch in a beautiful old building and I am sure there was a great view of the river at one time. Now it is a view of a massive concrete wall. There were several openings through the levee and on the river side was a vibrant  area with people enjoying the beautiful day and the river.

At Cape Girardeau we crossed over to the Illinois side. The bridge on highway  74 is one of the most beautiful bridges we saw on this trip. 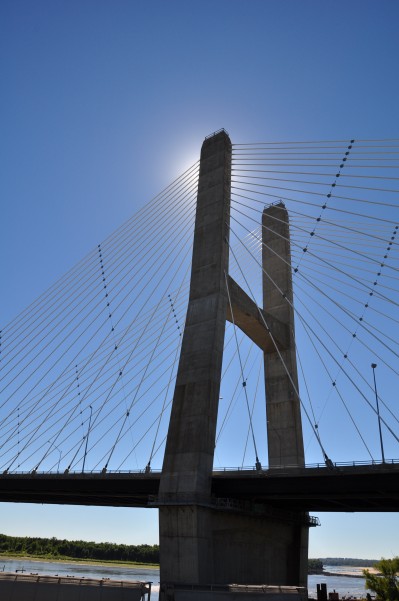 I couldn’t resist this shot of the bridge with the sun behind one of the piers.