As you get further south on the Mississippi the river gets very windy. There are fewer towns along the river and the Great River Road tends to go from town to town without much correlation to the river. It was about 70 miles from Dyersberg to Memphis without a view of the river. That was the longest stretch of the whole trip so far without seeing the Mississippi. 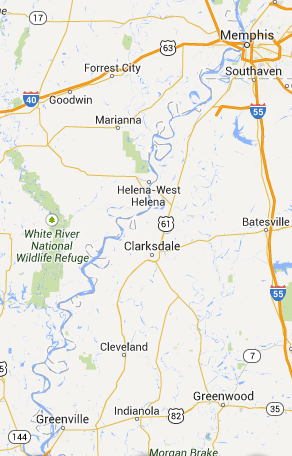 Arriving in Memphis we were looking for signage to lead us to the waterfront. That’s the hard part of traveling by motorcycle you have to memorize your route and depend on good signs. The first sign we saw that pointed to the waterfront took us to a freeway ramp leading out of town. Hmmmm. Maybe that was a sign. We turned around as soon as we could and tried again. This time we did get to the riverfront and the visitors center.

Our plan was to ride through the historic downtown and have lunch at Beale St. We did lots of riding in Memphis. Not motorcycle friendly at all. Rough roads, trolleys and tracks, and lots of pedestrians and cars. We went by Beale street a couple of times but there was NO WHERE to park a motorcycle and lots of no parking signs. We gave up on lunch on Beale street and headed for Graceland about 10 minutes away by freeway.

As you might expect the area around Graceland was a zoo. I had seen Graceland on layovers while I was flying. It has changed quite a bit since then. There is a huge tour center  across the street now and shuttle busses that take the tour groups to Graceland. When we found out that the tours were as much a hotel room we opted to call it a day in Memphis and continue on down the road.