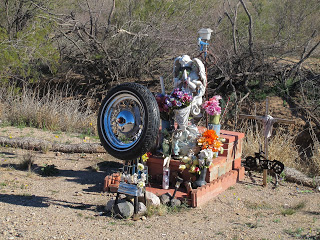 The road to Sells begins in Tucson, AZ and heads
about 60 miles southwest, crossing into the Tohono O’odham Indian
reservation where Sells is located.

Open range is the norm along narrow two-lane  Highway 86 and cotton fields dot the countryside. In the distance, mountainsring the area, including Kitt Peak, which has the most diverse collection of observatories in the world and the National Solar Observatory. Baboquivari Peak, the sacred mountain of the Tohono O’odham people, is just to the south. 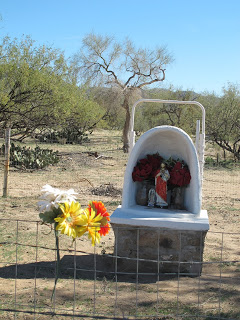 But most noticeable are the many crosses and
other memorials along the road marking deaths at those spots. The road has no
shoulder and a reputation for many fatal accidents, often alcohol-related,
though there is no drinking on the reservation itself. One memorial has three
white wooden crosses, others are single crosses decorated with wreaths or
colored streamers and flowers. One looks like a church icon and yet another
elaborate one has a motorcycle wheel in front, suggesting a motorcycle
accident. Many memorials are marked with stones circles. A few have fences
around to keep cattle out. 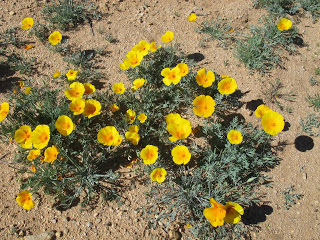 Along the way a couple
of stores are selling Indian art along with snack foods and simple meals but it
was mostly just the Sonoran desert and thousands of saguaro cactus.
goldpoppies provide a cheery yellow ground cover between the palo verde and
mesquite trees, and prickly pear and cholla cactus on long stretches of the
road, probably thanks to a recent rain. What looks like birds’ nests or Spanish
moss but actually is mistletoe hangs in many trees.
Near the border patrol
station, half a dozen cameras on tripods are pointed at the road. Four border
patrol officers stood talking to two illegal detainees sitting on the ground
wearing handcuffs. The area is a runway for illegals crossing the border.
Border Patrol cars are
visible all along the way, and on the lane heading back to Tucson, they stop
everyone driving through. We removed our sunglasses while the border patrol
officer peered in the back of the car, checking for any unintended ‘”guests”
and then waved us on.
Our destination in Sells
was the Desert Rain Café, a non-profit project of the Indian community to
promote traditional and healthy Tohono O’odham foods and support their education system. We went there for the delicious
Thursday lunch special of tender prickly pear glazed pork ribs, brown tepary
beans, a whole wheat tortilla and side salad of dark greens with pieces of
apple and strawberries with a touch of cactus nectar.
Adjacent to the café, the Desert Rain Gallery
sells high-quality Tohono O’odham baskets in assorted sizes, blankets, jewelry,
dried food and books about these native people, who have lived in the Sonoran
Desert for countless generations, their once-enormous nation artificially
divided by the Mexican-American border. 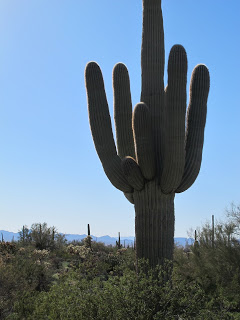 If you liked this article, make sure to check out Pamela’s blog athttp://travelingwithpam.blogspot.com/