Blue Ridge Mountains of Virginia
By Pamela O’MearaSometimes the Blue Ridge Parkway in Virginia meanders through a tunnel of trees and other times, it opens up for views of the distant mountain ridges, which often have a hazy
bluish tint. Occasionally just a few peaks are visible as the clouds roll
in. In the fall, the mountain ash, maples, dogwood, birches and tulip trees
turn red, orange and yellow and people come from all over for the view. In
the spring and summer, purple rhododendron and flame azalea bushes, and a
host of wildflowers including trillium, mountain laurel and pink lady¹s
slippers brighten the scenic drive and overlooks.
This 469-mile parkway follows the eastern crest of the southern Appalachian Mountains through Virginia, linking the Shenandoah National Park to the north and Great Smoky Mountains National Park in North Carolina to the south.
Over 100 species of birds fly through during the spring migration, and
wildlife like deer, black bears and foxes might be seen along the road. Nine
campgrounds and many hiking trails and picnic areas are available in this
National Park, the longest and narrowest in the country. The famous
Appalachian Trail runs alongside part of the parkway, which roughly parallels Interstate 81.
On my recent trip to Roanoke, the largest Virginia city along the parkway, a few of us headed north through the colorful trees, past dairy farms and apple orchards, and stopped at the George Washington and Jefferson National Forest­, just off the parkway, for a hike. I walked carefully on the rocky Streamside Trail that followed Roaring Run Creek up to the 30-foot cascade of white water of Roaring Run Falls, and I stopped often to take pictures and admire the view of the rocky walls, trees, flowing water and bridges crisscrossing the creek.
I returned the same way, due to time constraints, but hikers can return on the Woodlands Trail through the forest. Either way, visitors can check out the old brick Roaring Run Furnace, which is listed on the National Register and was in operation from the 1847 to the 1850s. From veins of iron ore in the rocks, the furnace produced the low-grade pig iron, which was shipped down the James River to Lynchburg and Richmond for making tools or railroad tracks for the development of the nation and for the Civil War.
Then we headed farther north on the Blue Ridge Parkway to the Peaks of Otter for dinner at that rustic lodge. Walking down the path to the lake, I could barely see the water, due to low clouds and fog. One great blue heron stood on the shore looking for fish. It felt mysterious. Then we enjoyed a buffet dinner with locally grown food and wines before heading back to Roanoke. 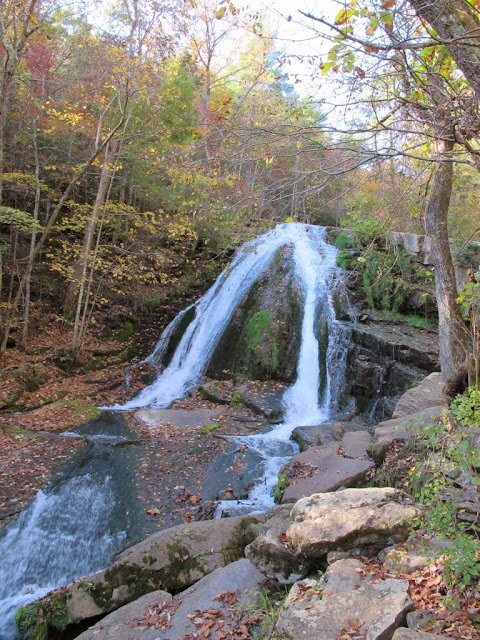