Pamplona Spain: following Hemingway’s footsteps
Pamela O’Meara
My balcony at the Gran Hotel La Perla in Pamplona, Spain, overlooked a narrow street lined with 18th century yellow, blue, tan and pink buildings along the route of the running of the bulls during the July festival of Sanfermines. The run was immortalized in Ernest Hemingway’s book, “The Sun Also Rises.”
I was in Pamplona in September during San Fermin Txikito, a  smaller,
family-oriented festival similar to what Hemingway experienced minus the bulls. As we elbowed our way through the festival crowd in the narrow streets of the old city, we stayed close to our tour guide, José Luis Del Pra, an architect who is fluent in English. He caught up with the zampanzares — people wearing giant brass bells on their backs – the gigantes y cabezudos (giants and big heads), and the groups of costumed dancers, musicians, and kids on their fathers’ shoulders. The gigantes dressed in lace and satin and representing the mythical kings and queens of Europe, Asia, Africa, and America, towered over everyone as they walked through the crowds.Running of the bulls
Jose also walked us along the half-mile route of the running of the bulls, and took us to the Museo del Encierro  — museum of the running of the bulls  — where we learned the history of the event and watched a live video, reminescent of Hemingway’s story.
Hemingway, a foreign correspondent for the Toronto Star and living
in Paris, first visited Pamplona in 1923 to watch the running of the bulls, a throwback to

medieval times when farmers drove their bulls to market.
“In the Sun Also Rises,” he wrote, “I went out on the balcony (of La Perla)…. All the balconies were crowded with people. Suddenly a crowd came down the street. They were all running, packed close together. They passed along and up the street toward the bullring and behind them came more men running faster … and then the bulls galloping, tossing their heads up and down. …. One man fell, rolled to the gutter, and lay quiet. The bulls went right on and did not notice him…. After lunch we went over to the Iruña.”
Hemingway’s book put Pamplona on the world map and turned the running of the bulls into an international event now attended by a million people a year. To honor Hemingway, a large stone statue of him overlooks the bull ring.
La Perla owner Rafael Moreno gave us a tour of Hemingway’s room from which he watched the running of the bulls many times between 1923 and 1959. It still has his original furniture and copies of all of his books, for which he was awarded both the Pulitzer and Nobel prizes. In lower level of the hotel, La Cocina de Alex Múgica was a favorite place for Hemingway to eat and drink. Since then, La Perla has been updated to a five-star hotel with free wi fi.

Eating, drinking, fishing
In the evening, we went to Café Iruña, established in 1888, where a
life-size bronze-like statue of Hemingway greeted us from the corner of the bar and his photos were on every wall. We enjoyed wine and pintxos – small servings of- little sausages, calamari and ham sandwiches — while we imagined Hemingway eating and drinking there with his expatriate friends.
Then we stopped at Café Bar Gaucho for pintxos like eel with tomato sauce and black olives on toast, a spinach and shrimp pastry and rosado wine from the Navarra region and at Restaurante Baserri. These pintxos may not what Hemingway and his buddies ate but they were colorful, delicious and unique.
Outside, a man on the street stopped us and showed us scars on his neck and abdomen where he was gored during the running with the bulls.
Back at la Plaza del Castillo, the main square of the old city, we sat
outside with a beer listening to the Nebari Quartet playing from the balcony of La Perla in memory of violinist and composer Pablo
Sarasate, whose music Hemingway would have heard there.

Earlier that day, we walked along the thick old fortress walls of the Citadel and stepped into

the gothic Cathedral of Pamplona and the mysterious ancient churches of San Lorenzo and San Saturnino. We saw many pilgrims with the walking sticks and backpacks on the Camino de Santiago, which legend says was taken by St. James as he preached.

One day we headed northeast of Pamplona, the capital city of the Navarra region, and climbed to an outlook in the foothills of the Pyrenees to see the Irati River where Hemingway went fishing with his friends and also wrote about in “The Sun Also Rises.” We
stopped at the Hotel Burguete where he carved his name in the piano during his stay there on a fishing trip. With Excursiones Auñak, we drove through the Selva de Irati, the second largest beech and fir forest in Europe. It has scenic hiking trails that perhaps Hemingway enjoyed. We drove through small villages into the mountains where five-time Tour de France winner Miguel Indurain trained, and then along part of the Camino de Santiago, We stopped

at the ruins of an old munitions plant in Orbaitzeta. Unused for over a century, it now has leafy vegetation growing through crumbling in the iron and stone structure.

While Hemingway put Pamplona on the world map, and it’s fun to trace his footsteps, Pamplona and the Navarra are so much more than Hemingway. It’s the delicious local food, colorfully presented, the centuries of history, the varied landscape and friendly people as well.
BOX
Palace and vineyards
With our Novotur guide Francisco Glaria Baines, we headed south of Pamplona past fields of sunflowers and corn to the Iglesia Fortaleza de Ujué, a well-preserved 13th century fortification perched on top of a hill and built to protect local citizens in war. When they were under siege, they stayed in the fortification, which contained a well, large stash of food and a church dating to the 12th century with a statue of Mary wearing armor and holding baby Jesus.  Inside the fortress in the bar of Meson Las Torres we enjoyed cortados (espresso with milk) and caramelized walnuts handmade by local ladies before our tour began.
Nearby, we went to the Royal Palace of Olite, one of the most interesting Gothic complexes in Europe and a National Monument. It was built for Charles lll of Navarra in the early 1400s, and Walt Disney filmed sleeping beauty there. Now in ruins, the palace once had modern amenities like running water, an ice house and a central heating system.
Part of the palace has been renovated and turned into the Olite Parador ­ one of 94 government-run hotels often located in historic buildings. This parador has wi fi for guests and a restaurant in a palace setting.
At the nearby Pagos de Araiz Winery, we learned the wine-making process, saw the owners’ art gallery with statues of the apostles and famous paintings, and finished our day by sampling wines from their modern vineyards.
SEE ADDITIONAL PHOTOS: 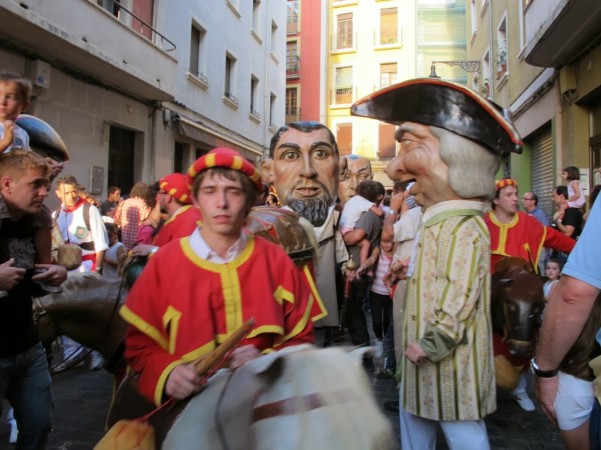 For more information on Pamplona and the Navarra region:

http://www.turismo.navarra.es/eng/propuestas/descubra-reyno/
http://www.turismodepamplona.es/verpagina.aspx?idpag=1&idioma=5
Pamela O’Meara is a staff writer Lillie News. This story is reprinted with permission.