Deep sea Fishing Ft. Lauderdale, Florida … with kids. How hard can it be?  Turns out not hard at all. Fishing with kids was a great experience and a we had a great time with FishingHeadquarters.

On a recent vacation to South Florida, I decided to take my kids out deep sea fishing. Of course, my oldest son, Jack jumped at the chance. But my daughter Reagan needed a little convincing. She wanted to go see dolphins, not fish. So, I asked her, what do dolphins eat? She says, “small fish.” I ask her, “what do big fish I am trying to catch eat? “Small Fish. Aaaaaaahhhh! You are going to Dolphin habitat! I want to go!” So, needless to say I got my two oldest to go out with me. We woke at 5 AM and headed north to the marina. Here, the kids are eating a little breakfast watching the sunrise before getting on the boat. Go 7-11 Donuts! Breakfast of Champions! 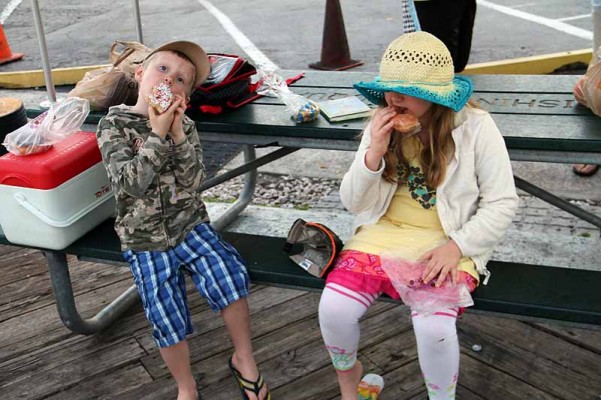 When you deep sea fish, it is about $150 per person to jump on a boat. With three of us it comes to $450. If you charter a boat all to yourself, you can do it for another $100. Totally worth it. No arguing with the captain and other guests about who catches the first fish, what kind of fishing you do, and what pace you are doing it at. With two young children, I got my own boat for half of a day. That way if it is total disaster, I can call it quits and go home. Or, if the kids are having fun catching bait fish on light tackle, we can spend the whole time doing that. 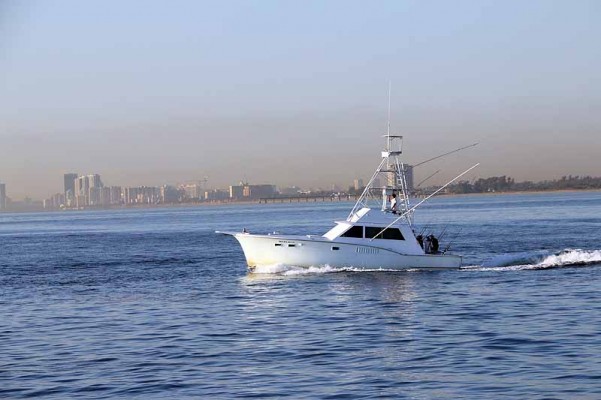 Depending on the season, you can fish for several different gamefish. This was in march, at the very beginning of the Billfish and Mahi Mahi fishing so we decided to go catch some baitfish and then go for Snapper, Jack, and anything else that might bite on the bottom. 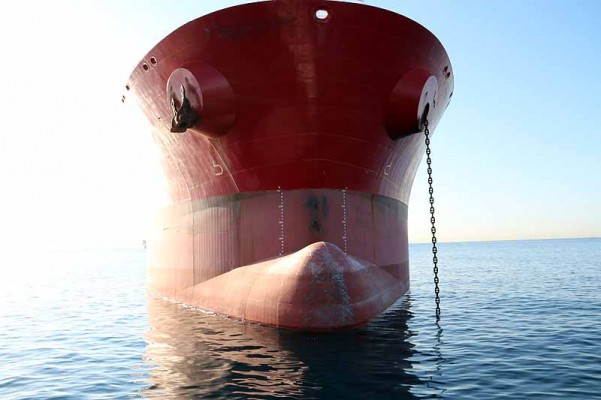 Baitfish typically school on top of structures and provide the foundation for a little food chain. Usually the predatory fish will be close these schools. In Ft. Lauderdale, there are often ships parked off shore and they school under the ships. But before we even got there, we saw a pod of dolphin jumping and swimming in our boats wake. 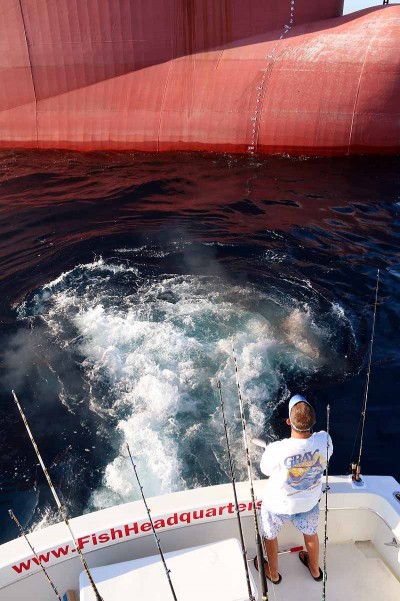 We started off by chumming the water right next to the bow of one of those huge ships. The technique was kind of genius. Back the boat up close the ship, chum the water and blast the chum under the boat with the engines. Sure enough, dozens of Blue Runners jumped out and attacked the cloud of chum. We were using light tackle and little bits of chopped up fish on a bare hook.  We cast the bait toward the ship and let it sink. BAM! a fish hits the bait and starts pulling out line. After a minute or two, we would be raising in a fish. We caught Bonita, Blue Runners, and we even caught a Ramora, which has a suction cup head to attach to shark and boats. Being primarily freshwater fisherman, this was like catching one huge bass  after another. The kids had a blast and when we had enough bait, we left the ship looking for big fish. We only had a few tangles in our lines. 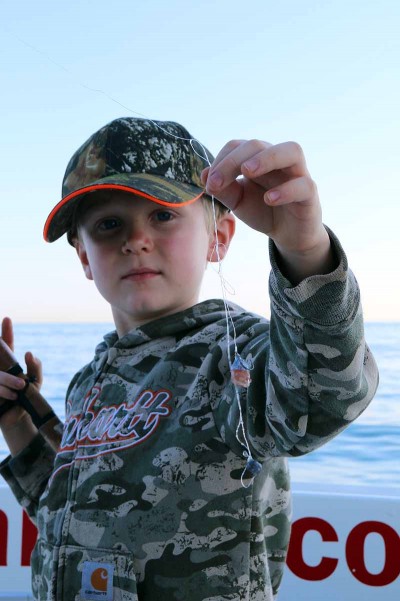 We started by stringing up a few bonita onto large weights and hooks and trolled around a shipwreck …  nothing. The day we were out, there was no current. This is apparently not good for fishing because it stagnates the fish. No calories burned, no need to eat, no catching biggies. But the shipwreck wasn’t a waste of time, we saw a sea turtle that could have been mistaken for a volkswagon if it was on land. 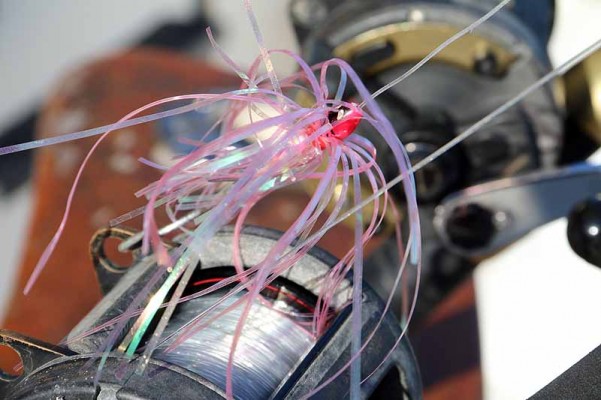 We moved on to fish for snapper. It’s a great eating fish and they are plentiful. We went to a ledge in about 270 feet of water. We were using a chicken rig to fish off the bottom. A chicken rig is a set of three hooks with big weight below them. We let them out to the bottom, and reeled them up about 3 feet. I don’t think we hardly touched the bottom before we were catching fish. We could have caught ton’s of snapper, but we only took home enough for a couple of dinners. 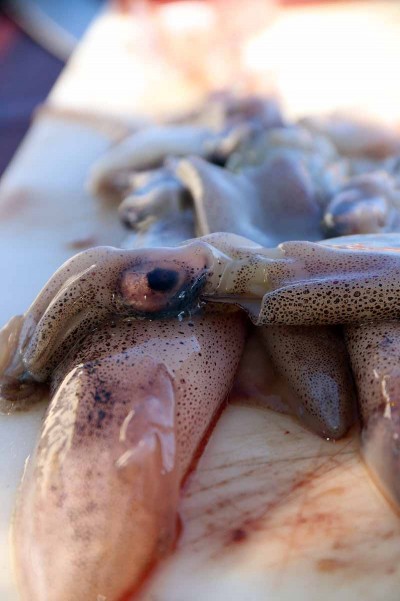 On our way back, we had some Blue Runners left so we tied some hooks on with wire and trolled through the inland waterways back to the dock. That’s when Jack hooked his monster Barracuda. The little guy was exhausted. Of course, we helped him with a little, but he sat in the big chair, and wound that beast in. He was exhausted. Other than coaching him and helping him pump the pole when he got tired, he did all the work. 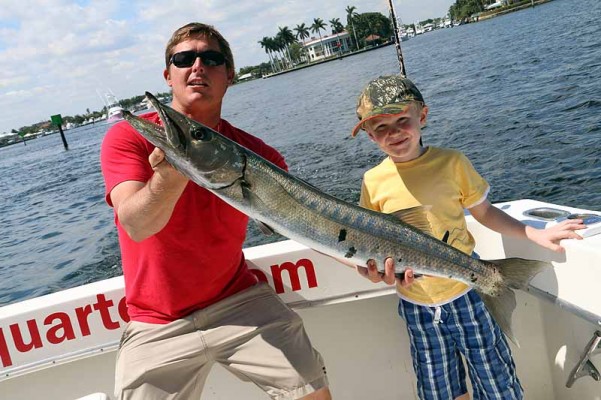 Back at the dock, we filleted the fish. I took home about 10 pounds of Snapper fillets (I went to the store and Snapper was $28 per pound!). It didn’t take long for the local pelicans and Tarpon to find the fish guts. 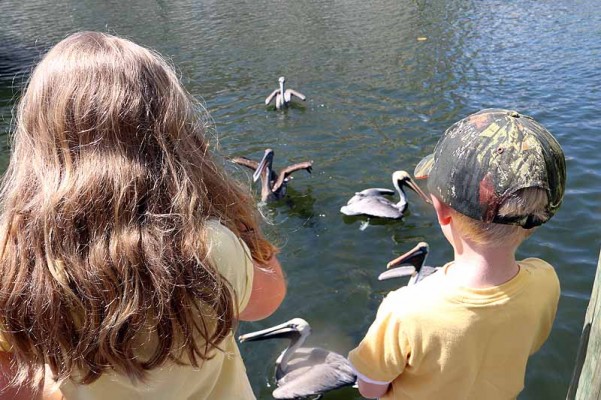 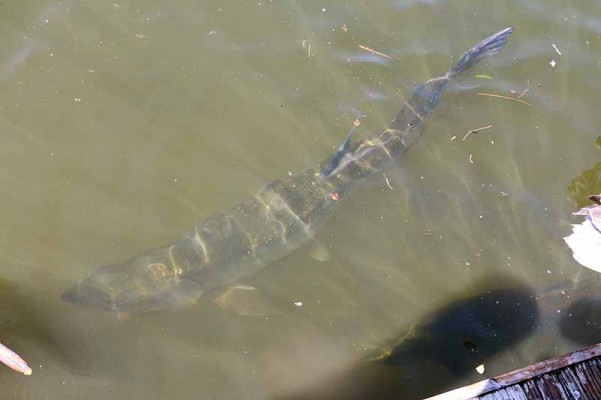 The trip was a complete success. We saw dolphins, a very big sea turtle, learned a lot about ocean fishing, had fun catching bait on light tackle, caught dinner, and have a trophy to hang on the wall. If you are taking your kids to the Ft. Lauderdale area and want to try fishing. Fishing Headquarters in Ft. Lauderdale was awesome. They were great with kids, knew what they were doing, and we all had a great time. The captain and guide had a genuine passion for fishing. They wanted to find fish and I think they might of had about as much fun as we did.