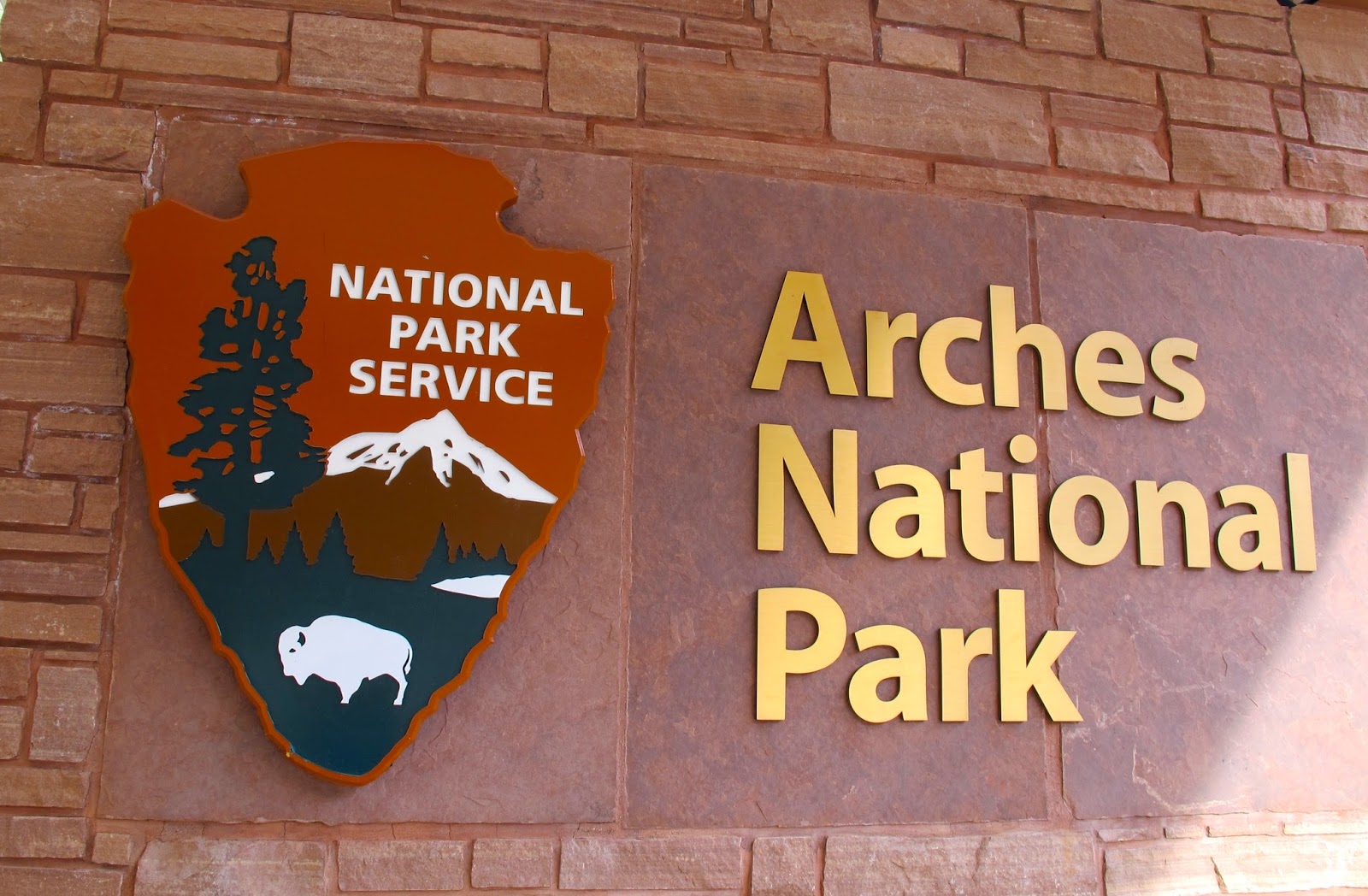 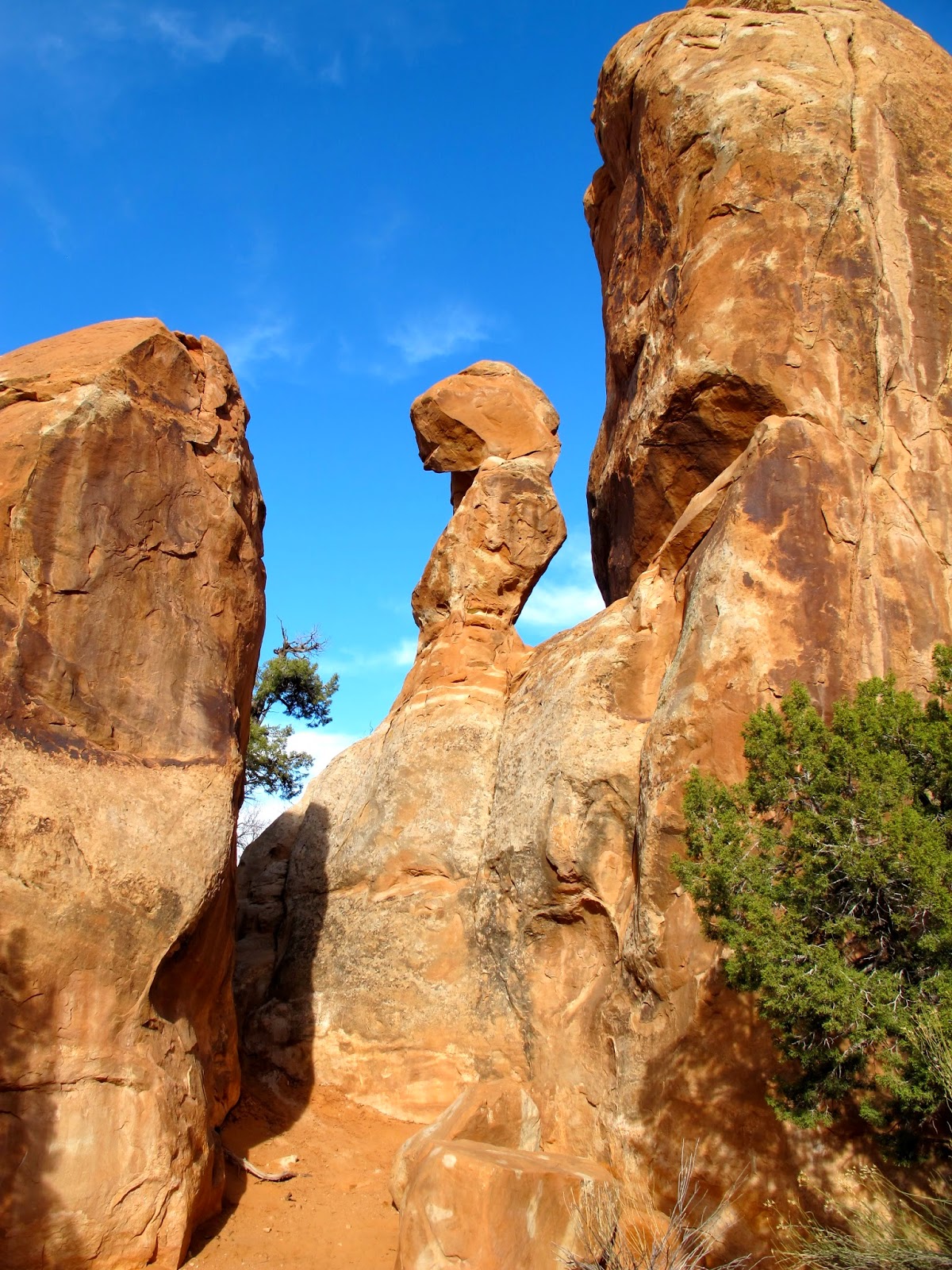 I can’t believe it took me so many years to visit Utah’s stunning national parks and monuments. A friend who had been there several times recently offered to take me on a whirlwind tour to most of them. It was too good an offer to turn down.
Each national park has something unique. One of my favorites is Arches National Park with its red outcroppings rising majestically, some with spectacular arches that Mother Nature carved into the red sandstone rocks. Located between Canyonlands National Park and Moab, Arches’ stunning scenery makes you pull out your camera at every turn in the road or on the walking trail.
Driving into the park, visitors see a rock formation nicknamed The Three Gossips, The organ, Double Arch, Courthouse Towers, Turret Arch, Cove Arch, Landscape Arch and Balanced Rock among some 2,000 arches and rock formations. The circle drive through the park has many viewing points where people can get out and hike to various spectacular arches and other red rocks.
My first stop and hike was to Cove Arch and then Double Arch and 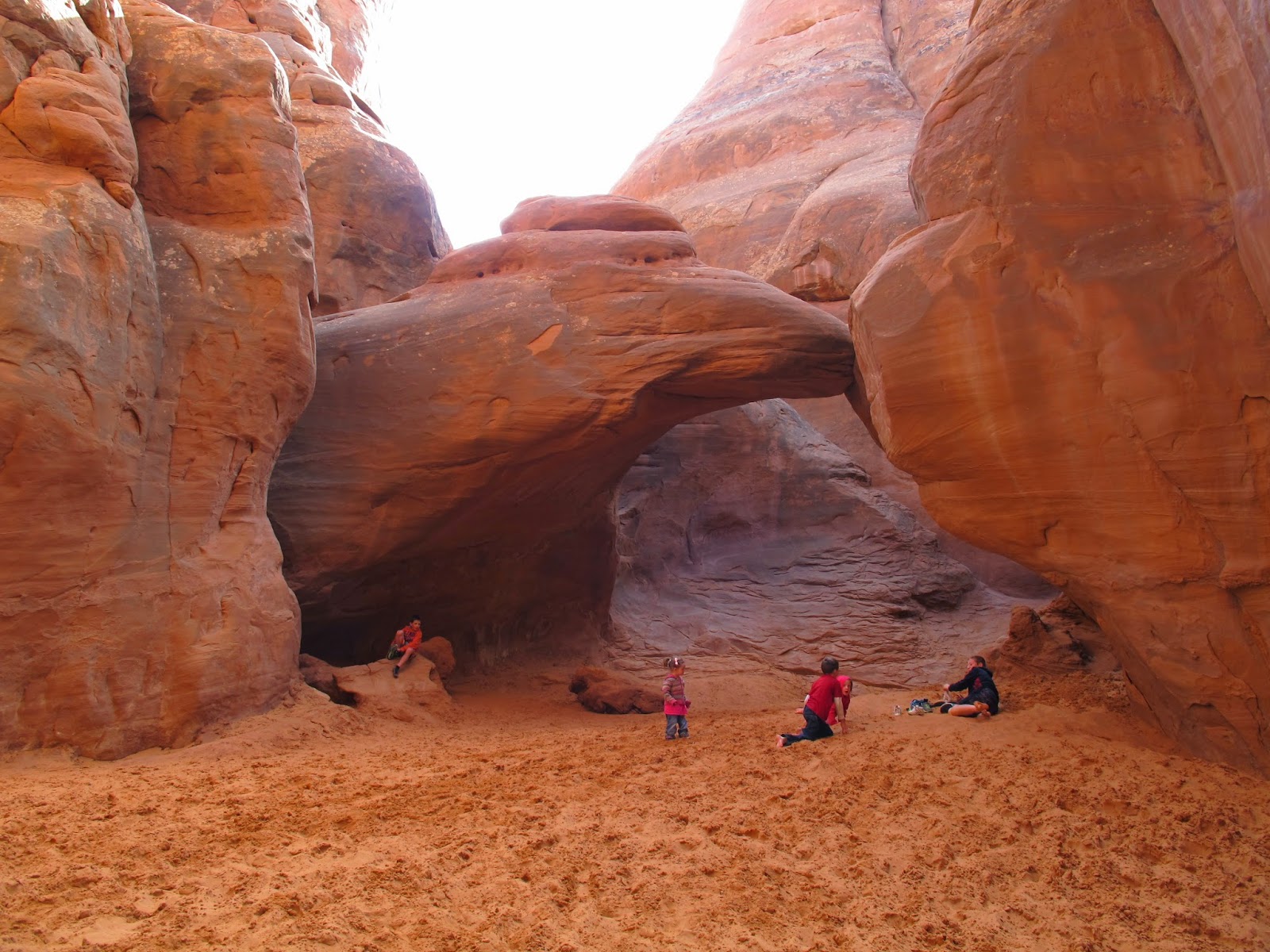 Turret Arch, where many visitors from the U.S. and abroad were taking photos and admiring the scenery. I offered to take photos of a few people in exchange for photos of me by the arches.
Then starting the 1 ½ mile twisty hike uphill to Delicate Arch, I began to get scared of falling when the path got steeper and petered out so people were climbing on rocks. Unlike the others, I turned around, missing the spectacular, often photographed view from the top – the scenery through the arch. My rock-climbing friend who had sprinted 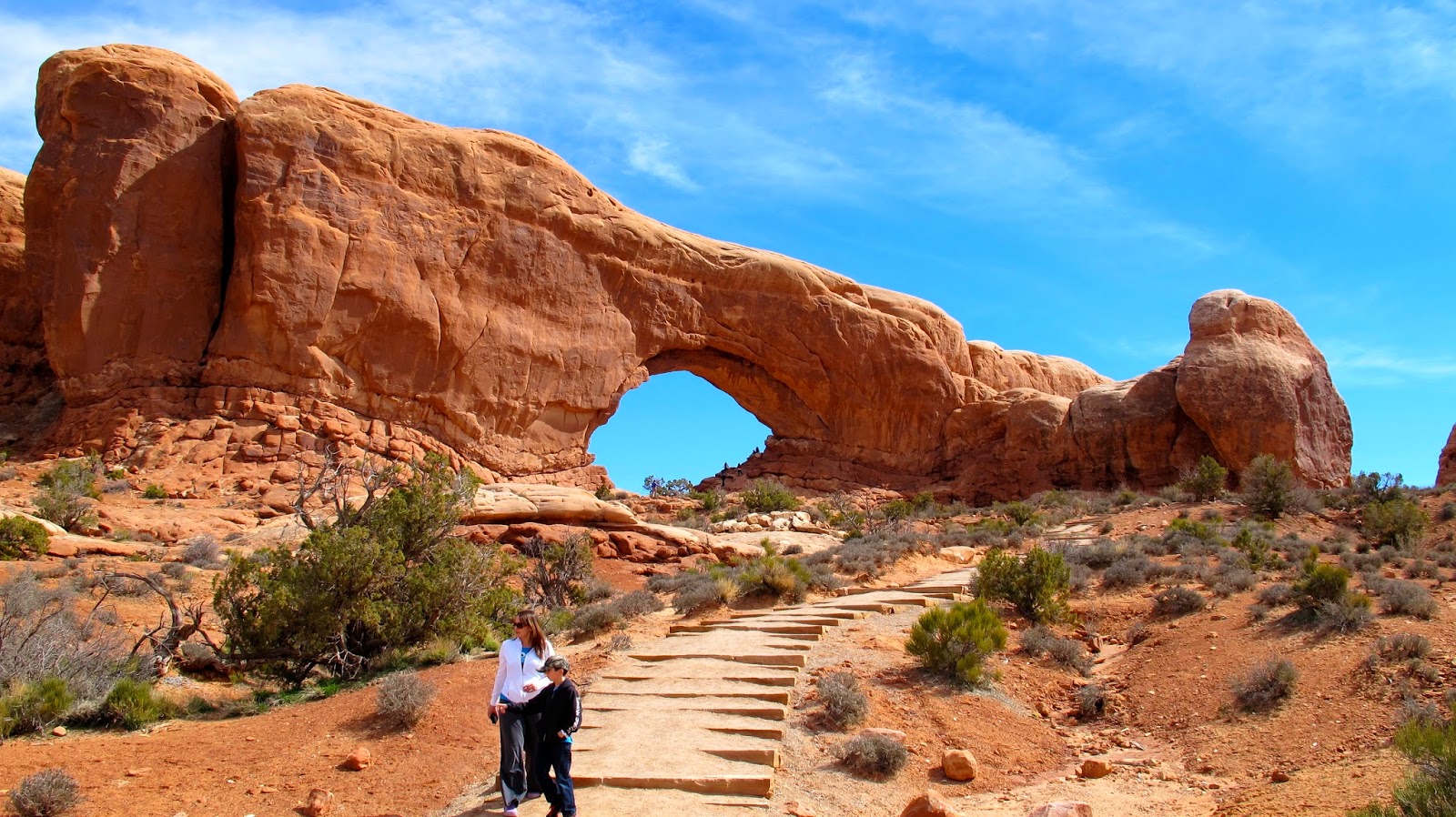 on ahead only to discover I wasn’t right behind, was surprised at my fear and couldn’t understand my anxiety. Along that trail, I stopped at the Wolfe Ranch to peek into the one-room cabin where the Wolfe family lived for a decade or two. Their remote ranch is now listed on the National Register of Historic Places.
At Sand Dune Arch, I squeezed through a narrow opening between tall red spires and to my amazement, I walked into what seemed like a cathedral with red rocks towering overhead, a big arch and red sand where kids were running around sliding. That 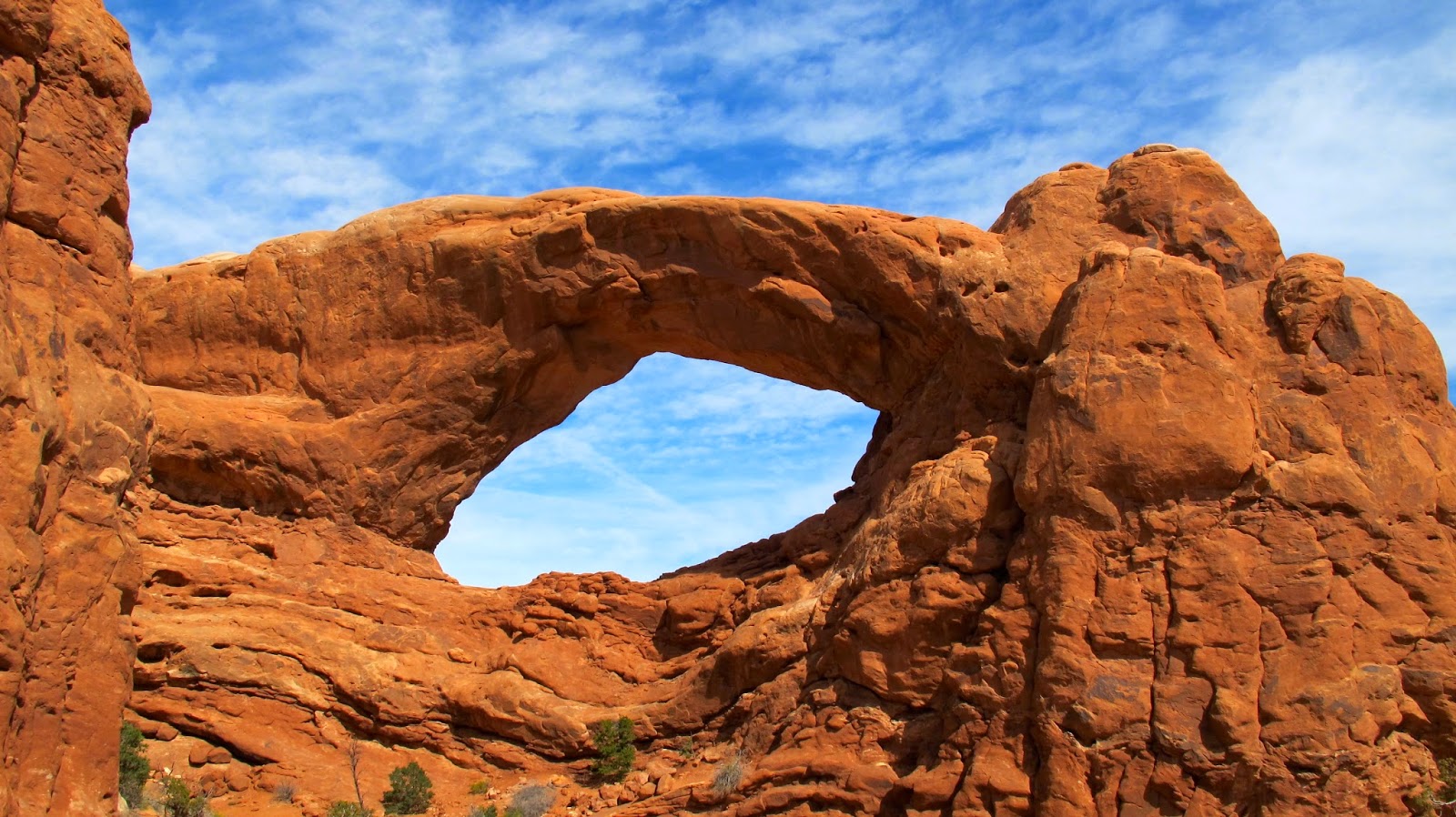 was the most unusual and beautiful single spot I saw in the park.
The Devil’s Garden Trail to Landscape Arch was very scenic, busy and not scary. I took photo after photo as I did throughout Arches. The trail was wide, smooth and comfortable enough to stand and gaze at the rock formations and twisted trees and open spaces.
There are many other trails as well for the younger, hardier set.
Visitors to Arches National Park will find campgrounds in and near the park or hotels in nearby Moab. Moab has great bicycling trails, some of which are paved. It’s also a popular place for four-wheelers and trucks with giant tires that can go on rough trails. And it’s popular with runners. My niece and nephew did a half marathon from Moab along Arches and Canyonlands a week after I was there and loved the area.
The surprise of the trip was oil and gas drilling outside the pristine Canyonlands and Arch 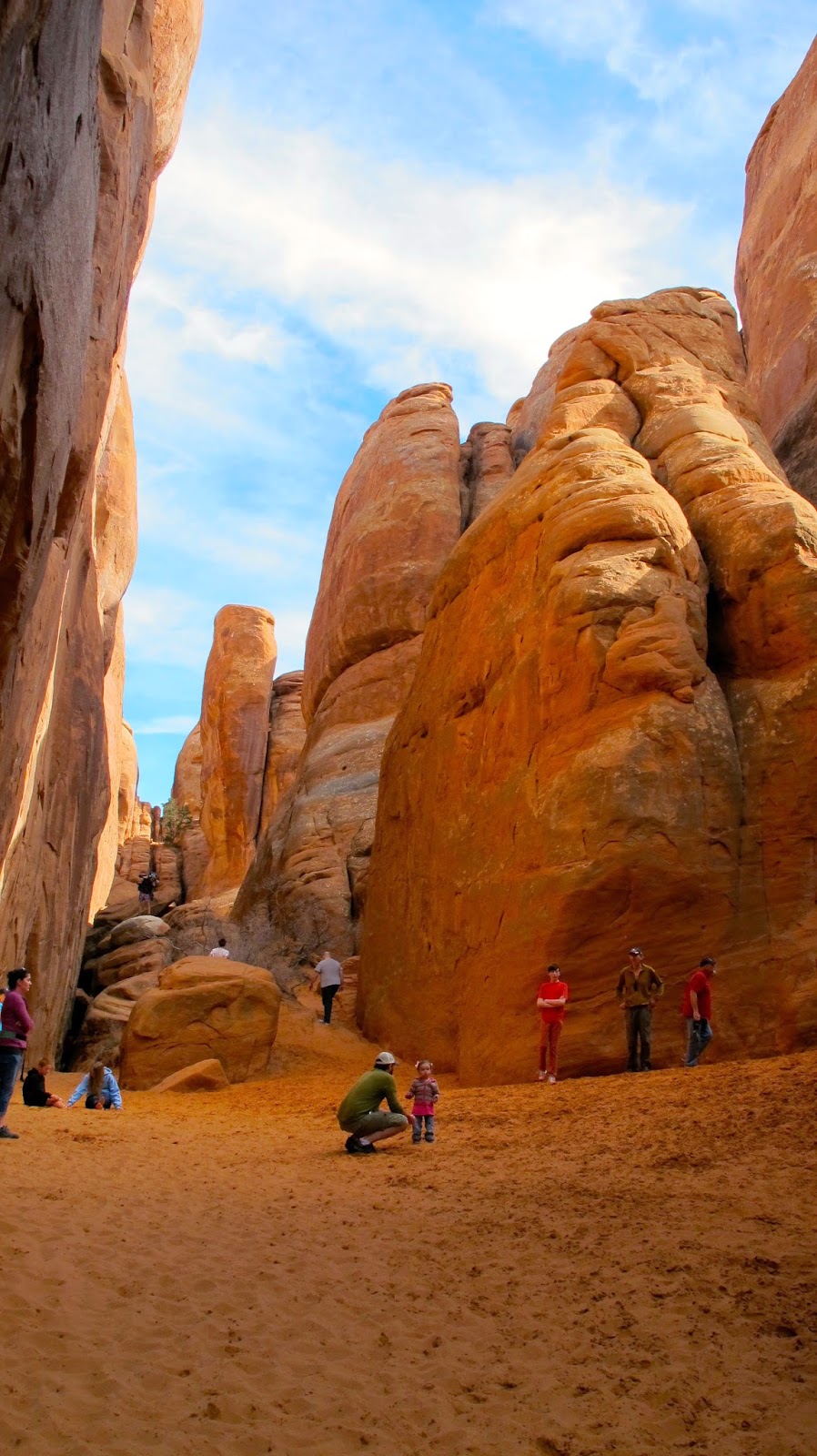 es national parks. Along with pump jacks and gas pipelines off the roads, oil tankers rumbled by on the roads, probably wearing them out. Some storage tanks were camouflaged with green paint to hide them from the view of visitors. I was appalled at the whole situation and wondered what we are doing to our environment.
But in spite of signs of gas and oil drilling outside, I urge everyone to visit to the amazing Arches National Park with its spectacular red rock outcroppings and arches. And while you are out there, visit Canyonlands, Bryce, and Zion as well.