This post shows you how to make a solar pool heater for under $100. It uses very common parts you can get at any garden center and I show you how well it actually performs!

Here’s a 3d version for all you tech nerds out there:

First of all, we have warned you about pools. Clearly, you didn’t take our advice and you got a pool. Probably, you are not happy with your heater either. Why else did you land on this page? By now, as a pool owner you know everything is expensive. One of the super annoying things about pools is that things break. Our heater goes in and out all summer long. To make things worse, we have a geothermal system. Never again. Oil would have to go to $1000 per barrel to get a payback in a lifetime. Pumps and heat exchangers are very expensive. To add a traditional heater, we would have to run gas to our pool shed, buy the heater, etc… It would cost thousands of dollars.

We looked into several other options for heating the pool.  Last fall, there was a big solar power exhibit and we were talking to a salesman about heating our pool with solar power. The problem with solar is you can’t find even a basic solar system that isn’t thousands of dollars. Plus it needs to be rigged into the pool system and there’s electrical work that a professional has to do. You have heard the joke about Harley Davidson that the HD really stands for “hundred dollar increments” … well Pool is some weird acronym that means “thousand dollar increments.”

Being of the mind that most things can just be taken care of by little bit thinking and creativity I thought I should try to work on a solution myself. Here’s how deep the thinking got (sarcasm): You know when you are working outside and you really need a drink of water really bad? So you go to the hose and you get a blast of hot water in your mouth? I thought, why don’t we just dump that water in the pool and set up more hoses to heat it better.

I had just made an irrigation system for my straw bale garden and noticed the poly pipes we used get very hot in the sun. So, I went to Home Depot and purchased 800 feet of poly tubing. Poly tubing is used for gardens all the time, it’s black and heats up very fast. It is also very inexpensive. I got 8 roles of this and a few miscellaneous parts to put it together. The cost was under $100. I coiled the 800 feet together and hooked them up to a submersible pump that probably every pool owner has anyway. 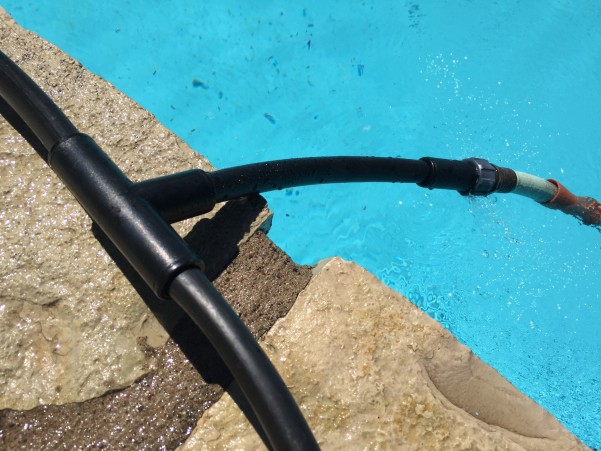 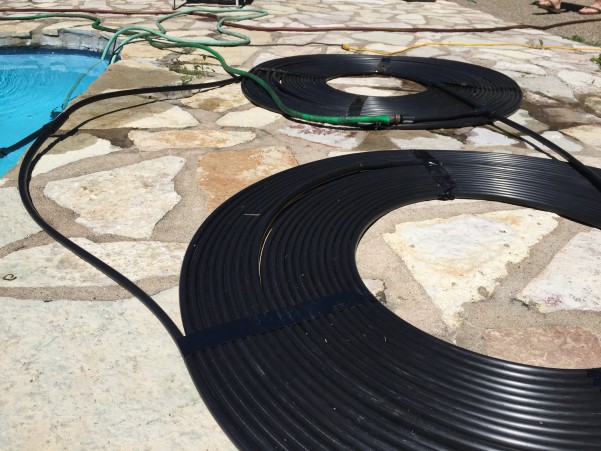 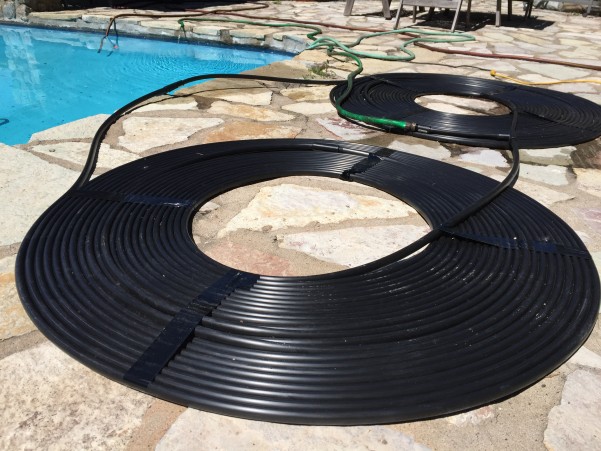 We had a slight issue with the water flow when we started. The hose adapter to the black pipes would get clogged up with the cotton from the cottonwood trees that blew into the pool. We just cut out the screen in that piece. That kept the flow of water high and prevented it from clogging. The only purpose of that screen is to keep soaker hoses from clogging up. Since we don’t have soaker hoses, we don’t need it.

With the screen removed we had very consistent water flow. We measured it and it would fill a 5 gallon bucket of water in one minute and twenty-six seconds. At nearly 3 gallons a minute it’s 7° temperature rise is really impressive. Especially considering this cost less than $100 and only took a couple hours to put together. 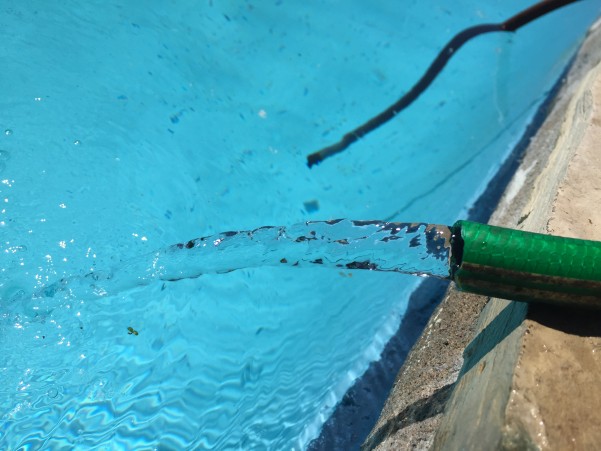 Eventually, we moved this to our roof so that it is out of site. After getting it working, here are my thoughts: Could we use this as a primary heater for the pool? Probably not. I don’t think it would work well late in the fall or early in the spring and it needs to have good sunlight to operate well. With that said, this is a very inexpensive way to dump a lot of heat in your pool through the summer.

One of the questions people ask me was doesn’t temperature change based on the volume of water that flows through. Of course. The rate of flow of water is important to know if you want to measure your progress. If I am heating 3 gallons a minute at 7 degrees, that is a lot more than heating 1/2 gallon of water at 7 degrees.  Obviously, the more water that flows through the system the less gain there would be in temperature. As an example, we measured a temperature gain of about 20 degrees in the morning when the water was a strong trickle. To be honest, I don’t know whether a large flow or a slow flow would actually be more efficient for heating the pool. But my guess is that it probably doesn’t have much effect. Mostly what we are doing is transferring energy that is being absorbed by the pipe into the water. I don’t think this heat transfer would change based on the volume of water that was touching it.

What you didn’t see in the YouTube video is the final product. We didn’t want those hoses just sitting out on the patio so we threw them on the roof of our Pergola. To do this we had to re-pipe some of the pipes. We switched it from a parallel to in-line system. This seems to have very little effect on the heating of the water flowing back into the pool.

So how did it work? Over a six hour time period that we were filming the video the pool rose 4°. Of course some of that heating would’ve been the sunlight itself on the pool and the ambient air being warmer than the pool itself. But the pool has been fall for couple weeks and we have not seen a rising temperature like that before. There is no question this is very inexpensive water heater is warming the pool. 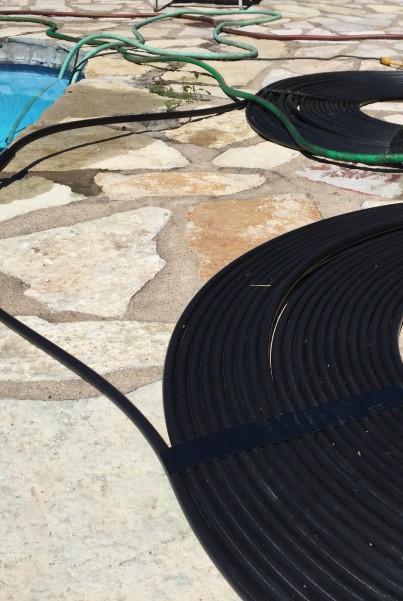