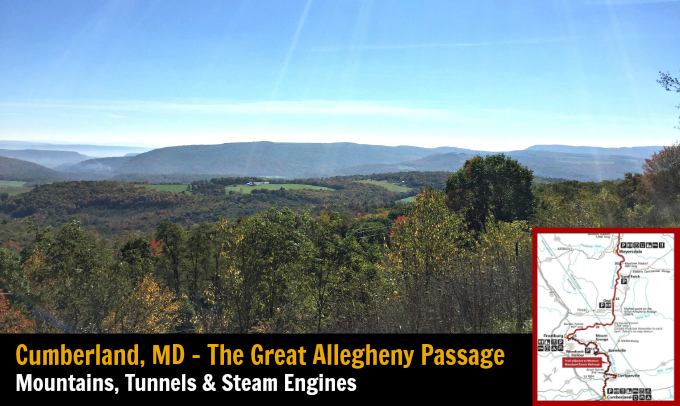 Time for another biking adventure.  As I may have mentioned before, we are lucky enough to live on the Youghiogheny Bike Trail.  This trail is a rails-to-trails project that was started in the 1980s to make use of unused railways by stripping out the rails and ties, and replacing them with a crushed limestone pathway that is about 15 ft. wide which can easily accommodate bike traffic in both directions.  Because these trails follow the course of the railways, they typically follow rivers, are picturesque, and have very gentle grades.  The Yough trail is part of a greater system of bike trails that extend from downtown Pittsburgh, past Rick’s house, and off to the southeast toward Washington DC.  It is not unusual in the summer and early fall to see bikers laden with huge saddle bags making the 335 mile trek to the nation’s capital.  I hope to join them someday when Max gets a little older, and before I get too old. 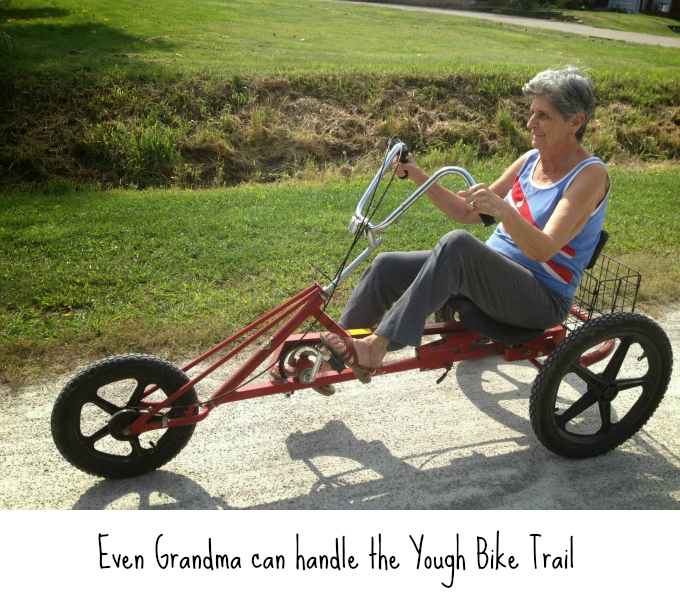 While it is certainly a luxury to live on the trail and use it daily for walking the dog or biking a few miles, it’s equally great to take advantage of particularly beautiful stretches.  We load our bikes onto the car rack and drive to different places locally to keep things interesting, and to more exotic places like Ohiopyle and Pittsburgh for a great biking day trip.

Today’s trip is a bit different.  Today we will bike the mountains from the Eastern Continental Divide in Pennsylvania to Cumberland, MD. The trip is about two hours from Pittsburgh.  Our friends Lisa and Linda set this up, and the logistics were impressive.  Thanks to Lisa, too, for the pictures as I had inadvertently hit a button on my camera that made my pictures kind of blue. 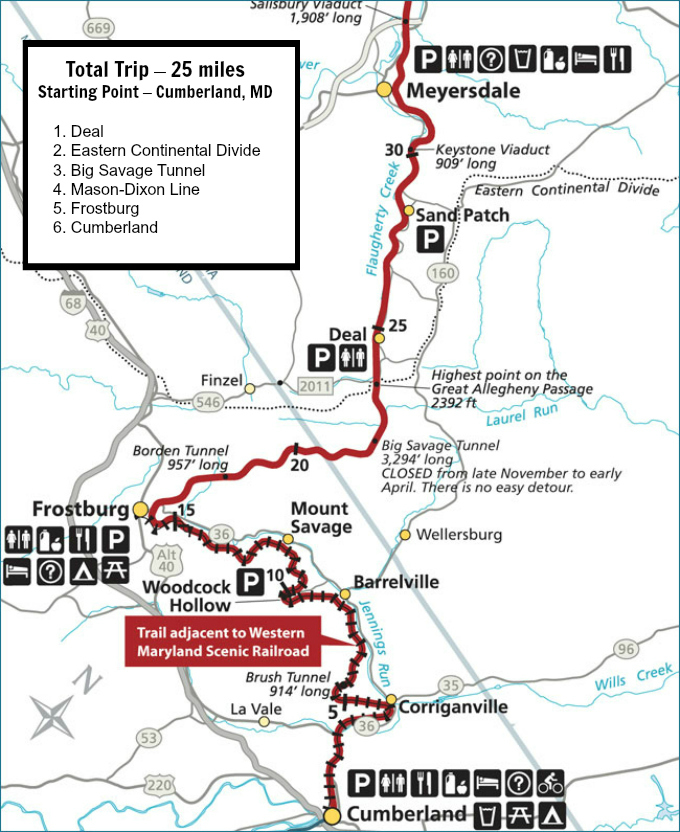 The trail through this section of the mountains is part of the Great Allegheny Passage, and is made up of several individual trail segments.  One of the most dramatic segment connects the Yough trail in Confluence, PA to the C&O Canal section south of Cumberland, MD.  This takes you right over the highest section of the Allegheny Mountains.

Now, I’m not one for pedaling uphill any great distance, so we engaged a company called Wilderness Voyageurs to drive us up the mountain so we could pedal down.  When I say “us”, I mean a whole bunch of us.  Four families with about 14 people met in downtown Cumberland and loaded the bikes onto a big van.  About 40 minutes later after a series of increasingly smaller roads, we came to the Deal trail access.  A few minutes to get the bikes off the van and away we go. 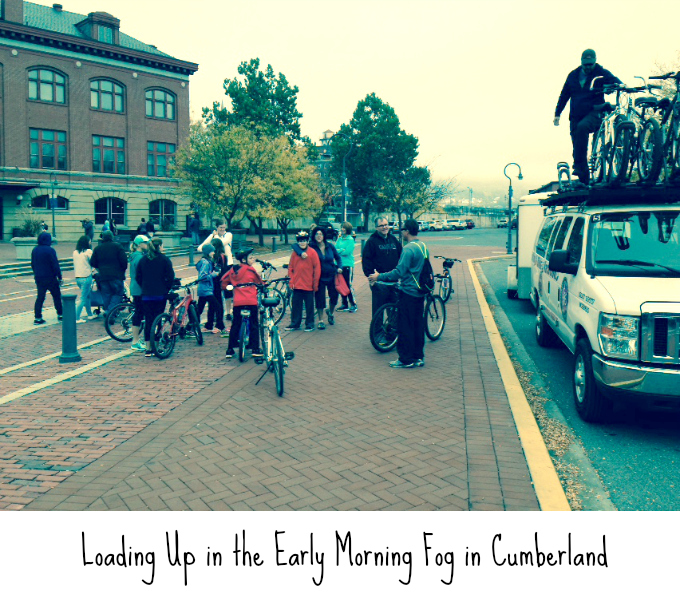 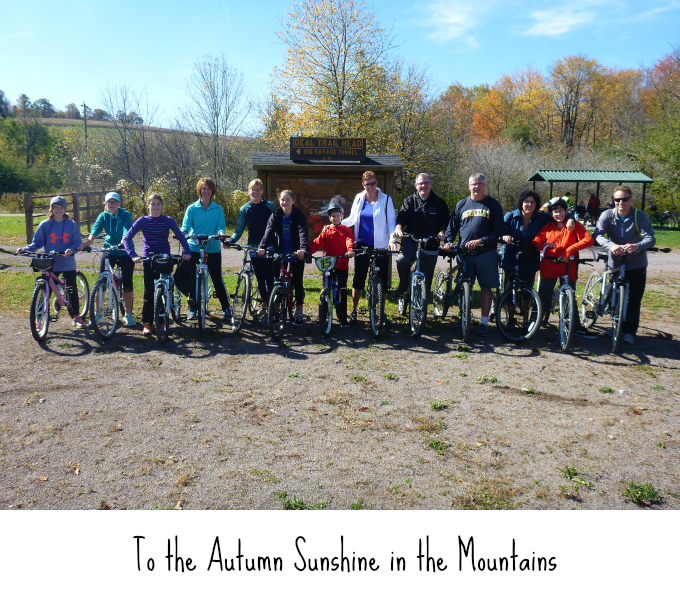 Deal to the Eastern Continental Divide

The whole point to going to the highest point on the trail is so you can coast downhill.  Unfortunately, Deal is about a mile or so from the highest point, so the first bit was uphill until we reached the Eastern Continental Divide.  This marks the line between the Atlantic and Gulf of Mexico watersheds.  All rivers and streams west of this line eventually end up in the Mississippi River and then the Gulf.  Everything to the east ends up in the Atlantic Ocean. 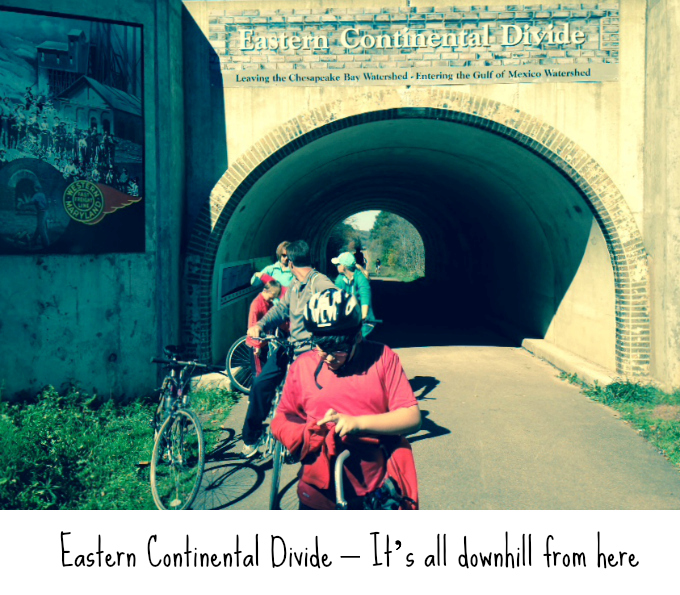 The Big Savage Tunnel and the Mason-Dixon Line

As the trail follows the old railway, several old tunnels are used.  The biggest of these, the Big Savage Tunnel is over half a mile in length. There are lights, but it is kind of cold and creepy.  The kids thought it was great.  There is a second tunnel further down the line is not as long, but is also not lighted.  That was a scary place since the only light was the daylight coming in from the entrances.