Being an adventurous sort I will choose a back road over a freeway while traveling almost every time. Unfortunately for many of us time constraints get in the way and we tend to hop on the freeway to get somewhere fast. Too bad, because had we not been on the rural roads, we would never have discovered Capulin Volcano National Monument.

We were on a long motorcycle trip from our home in Minnesota heading for the four corners area. The ride across Kansas and Oklahoma was brutally hot so we were anxious to get to the higher elevations in New Mexico.

After a layover in Clayton, NM we headed up highway 87 enroute to Taos NM. The changing landscape was a welcome sight after riding across really flat country for hundreds of miles. 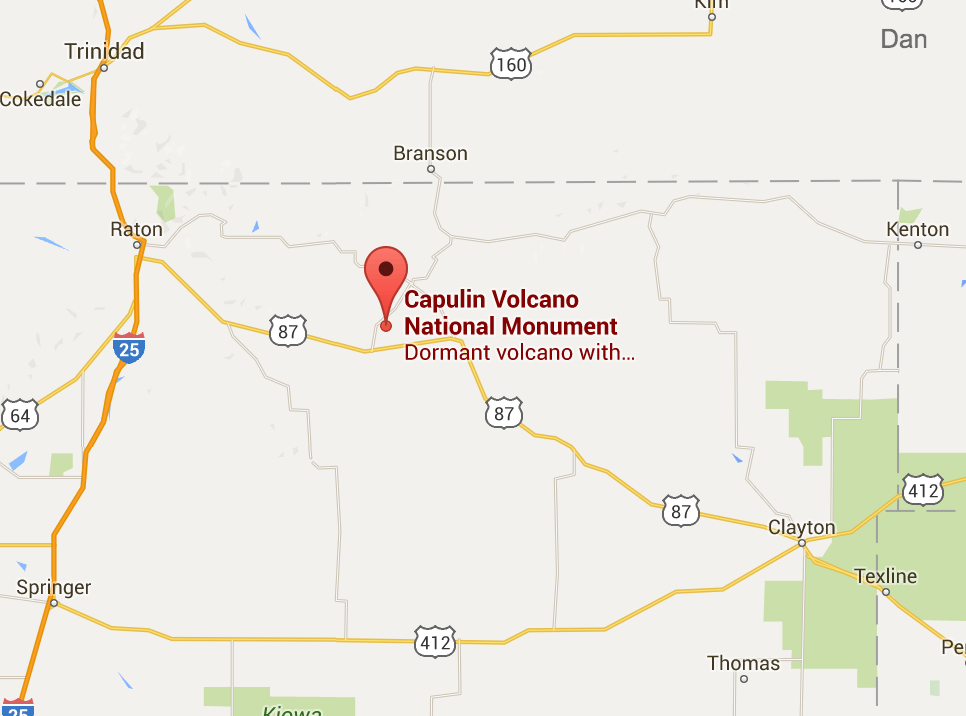 With the higher elevations came cooler air and lush green pastures. The silhouette of a cone in the distance caught our attention. 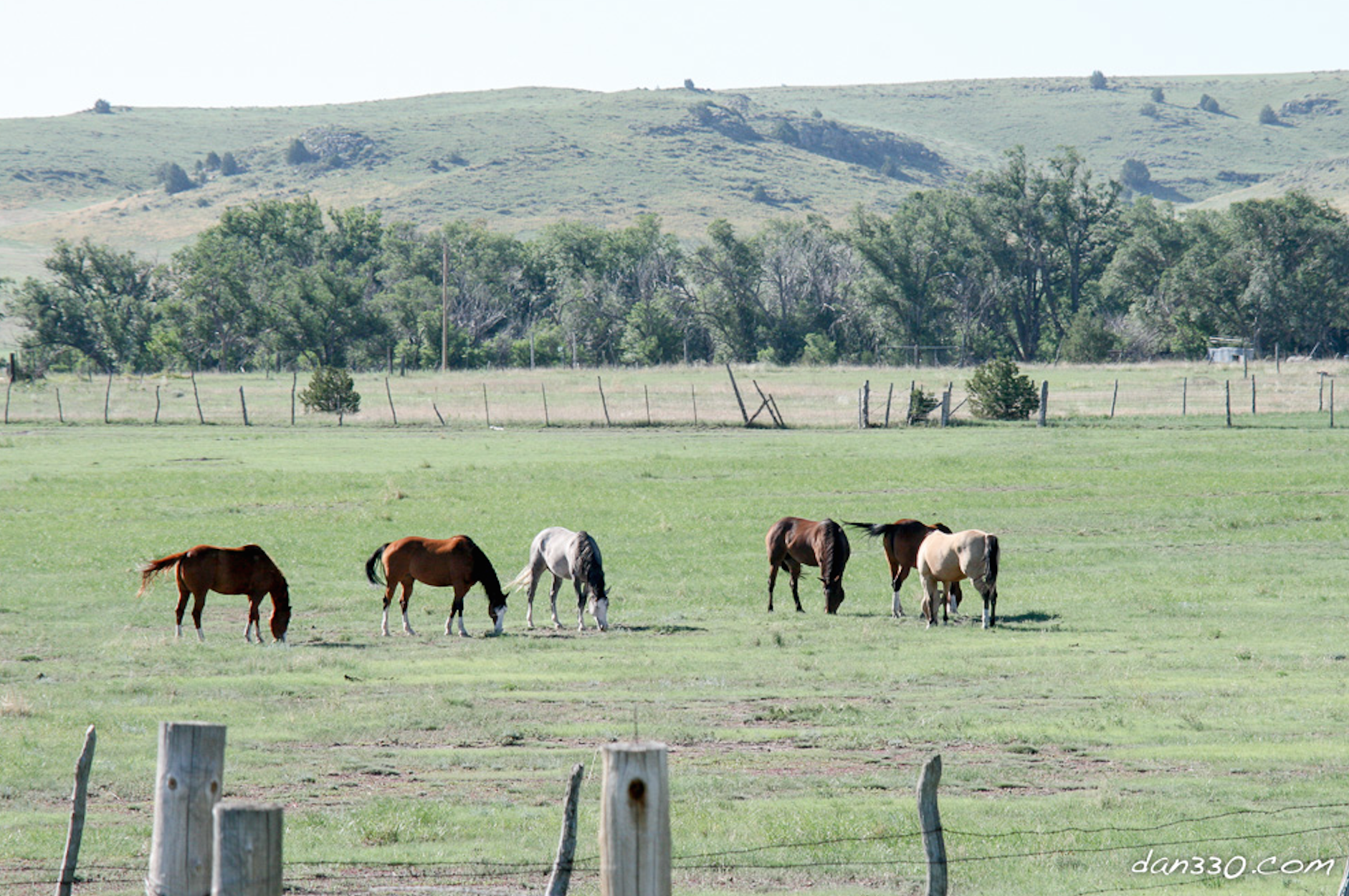 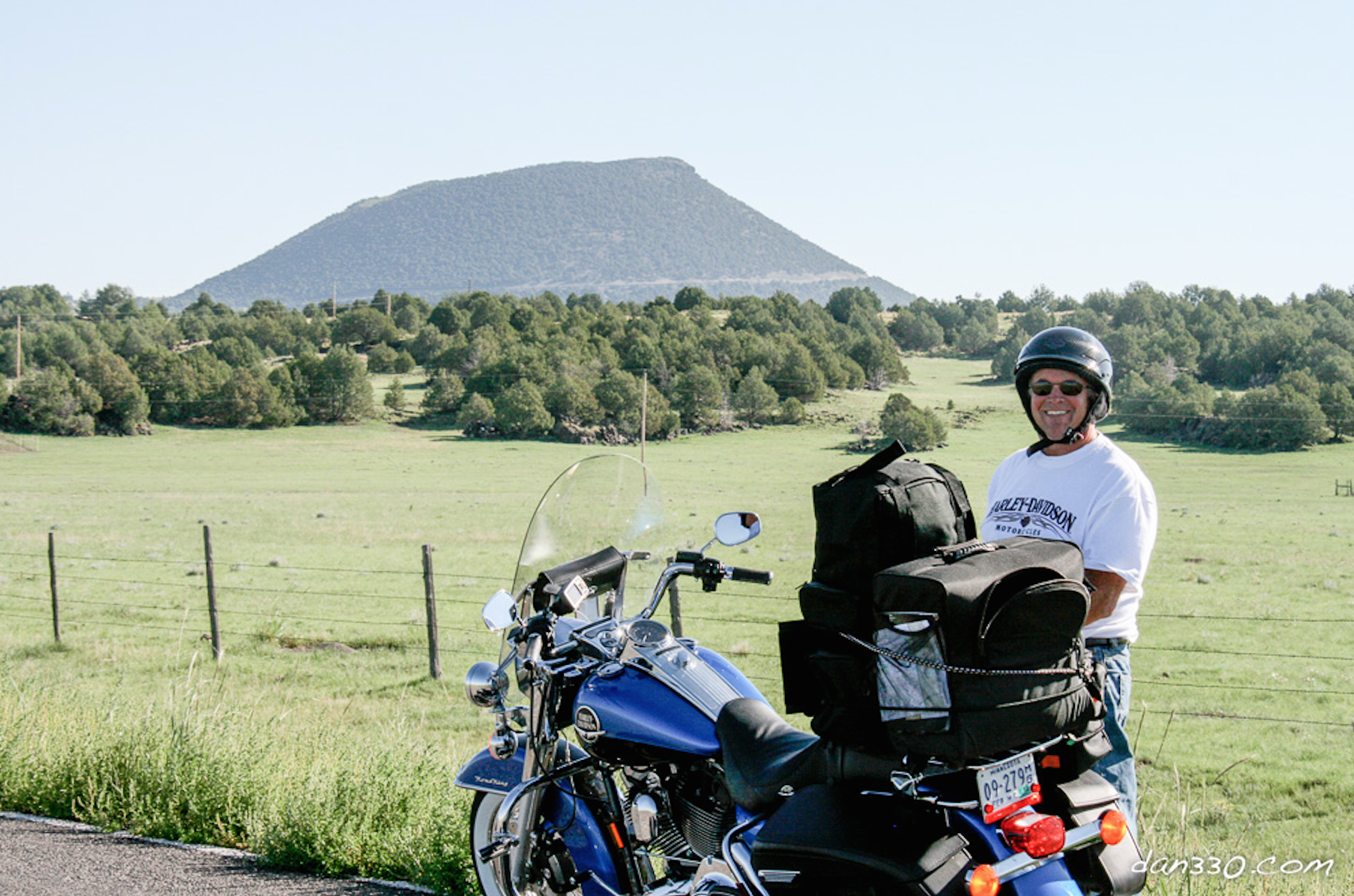 After checking a map, we saw a road that appeared to go near the distinctive landmark. We turned off highway 87 and soon we were at the entrance to Capulin Volcano National Monument. 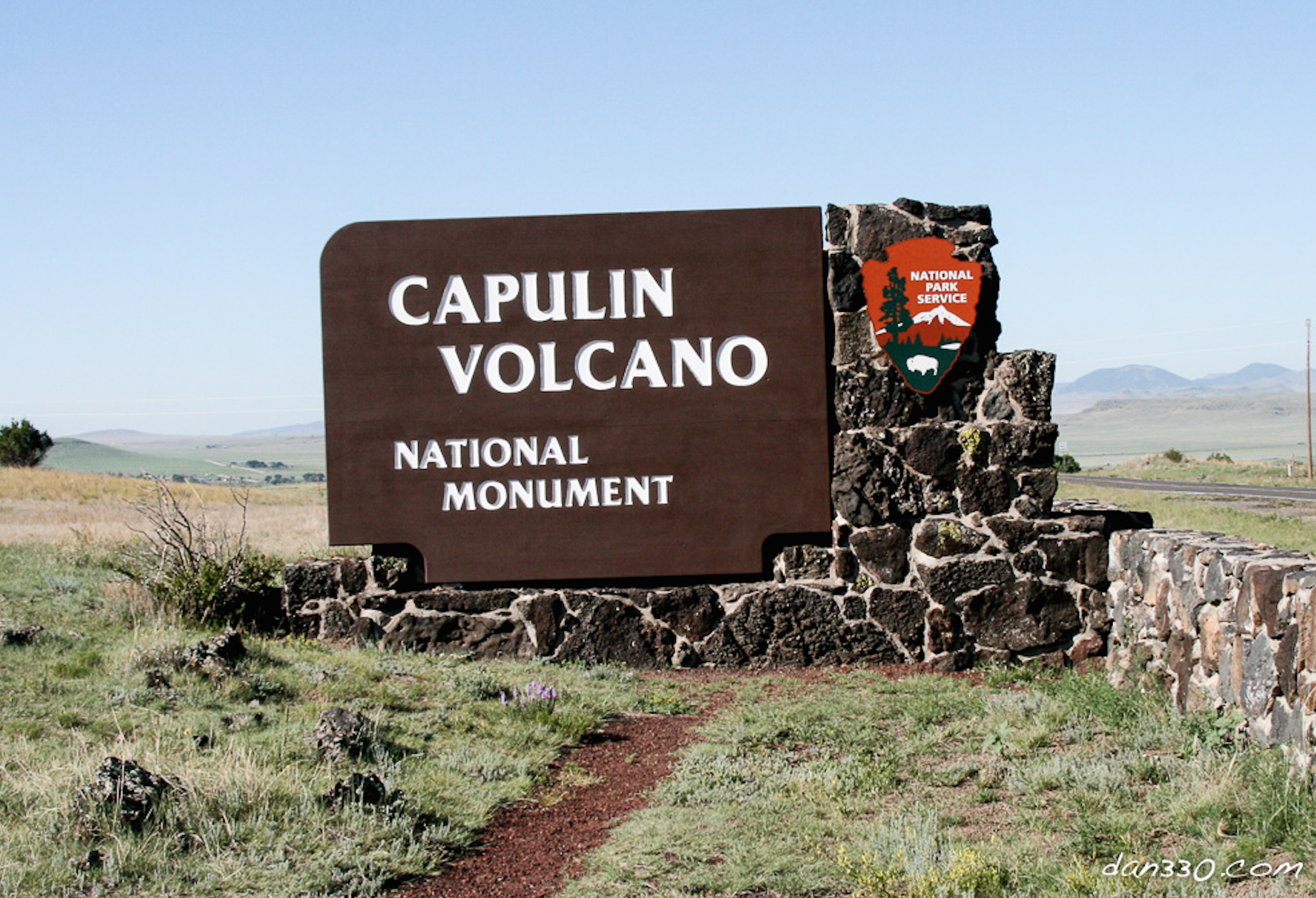 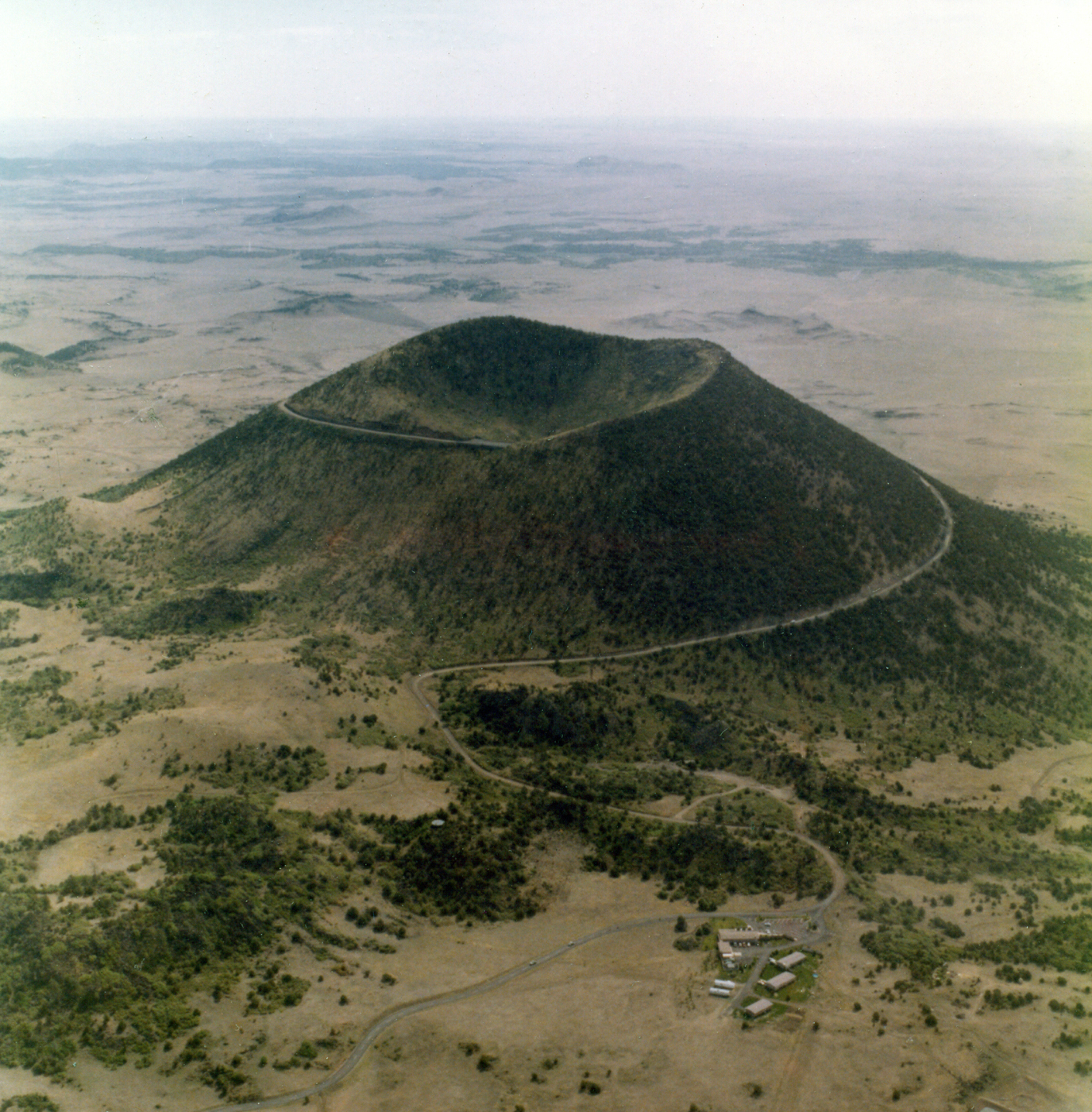 After checking in at the visitors center we drove the two miles or so on the circular road that brings you to the parking lot at the top of the caldera. There is no food available nor is there lodging or camping at this national monument. About the only activity is hiking the rim of the crater or lava fields at the base of the mountain. 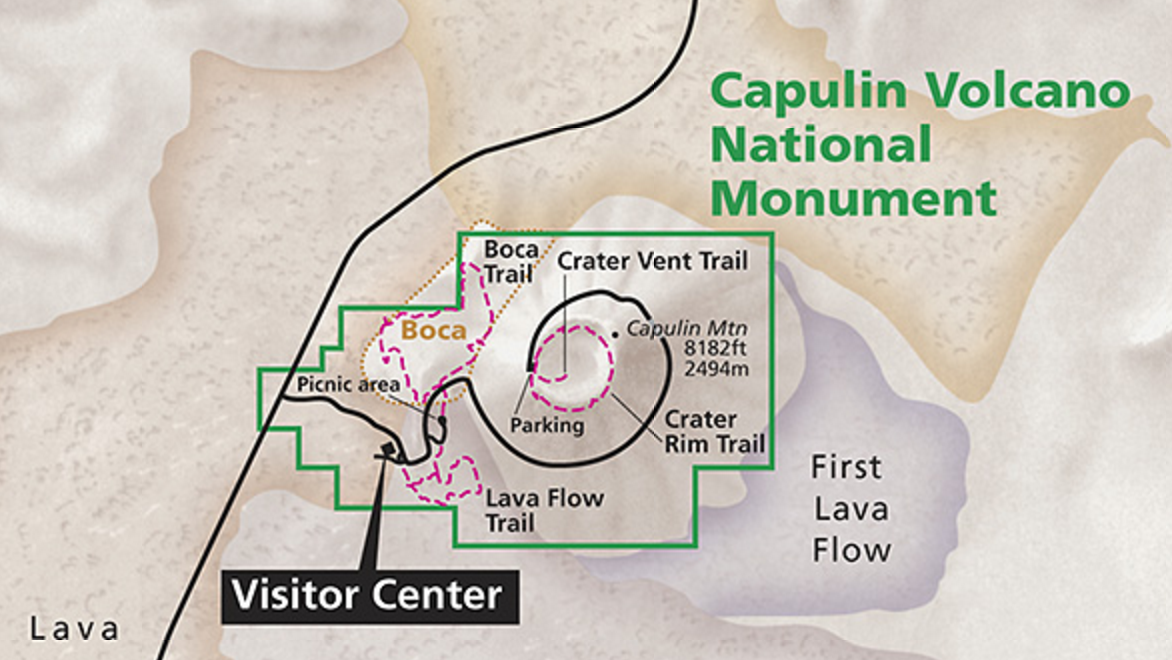 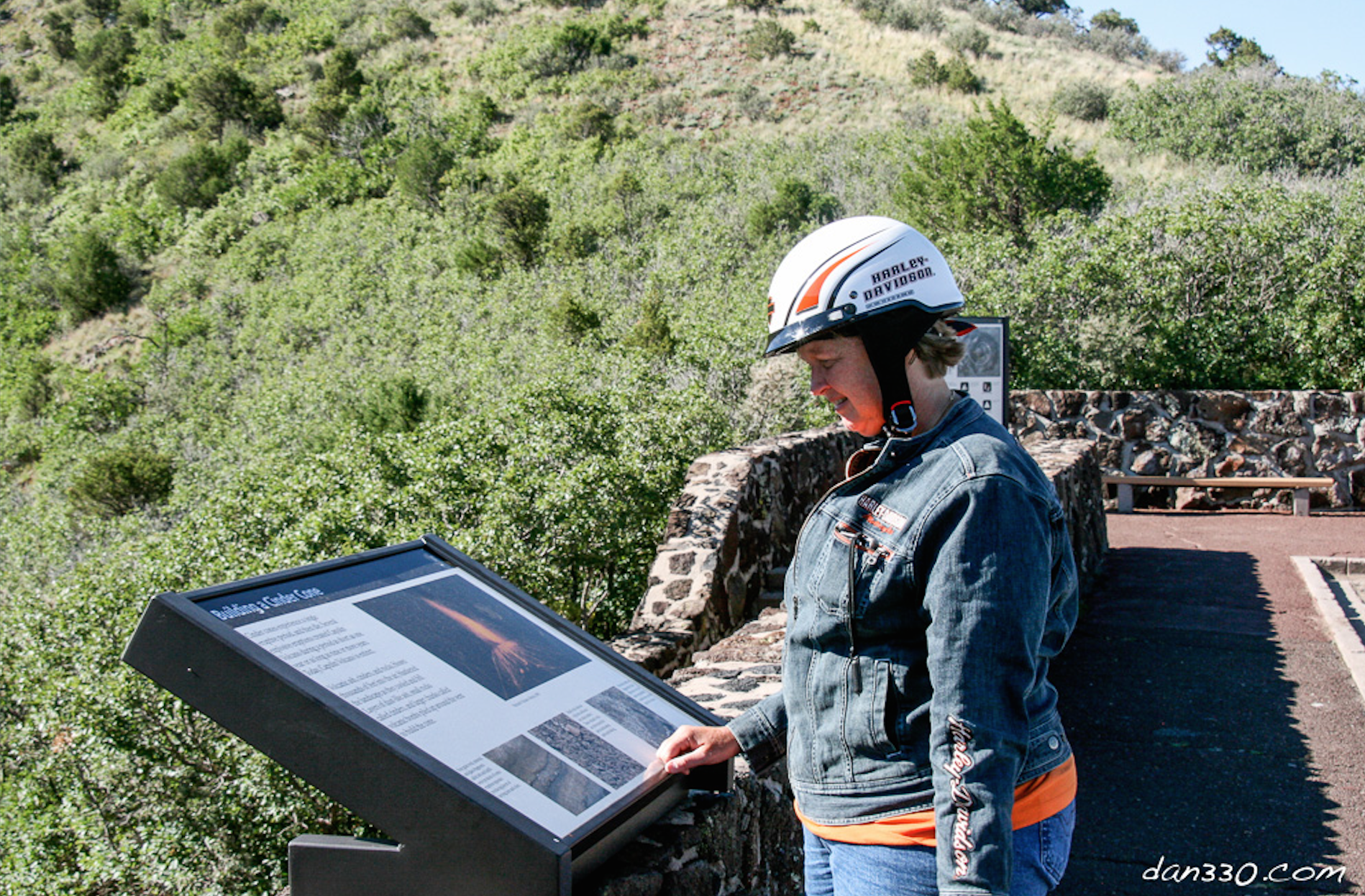 If you are a hiker- here is a summary of the trails at the monument from the NPS website:

The Crater Rim Trail is a paved, 1 mile loop around the top of the volcano. It is moderately difficult due to steep climbs and descents. Wayside exhibits with panoramic photographs provide visitors information about the surrounding features in the Raton-Clayton Volcanic Field.

The Crater Vent Trail is a 0.2 mile (one-way) trail leading to the bottom of the Capulin’s crater. This trail is paved and has an elevation change of 100 feet.

The Lava Flow Trail at the base of the volcano is an unimproved, 1 mile loop that crosses one of the volcano’s lava flows. Pick up a trail guide at the visitor center to learn more about Capulin’s lava flows and features along the way.

The Nature Trail is adjacent to the visitor center. It is a figure eight sidewalk trail that is handicap accessible. Stop along the way at descriptors discussing plant life, geology, and wildlife in this short walk around a volcanic “squeeze up.”

The Boca Trail is an unimproved, 2 mile strenuous loop through the Boca area. This is the vent area at the base from which the volcano’s lava flows originated. The trail provides close up views of numerous geologic features. 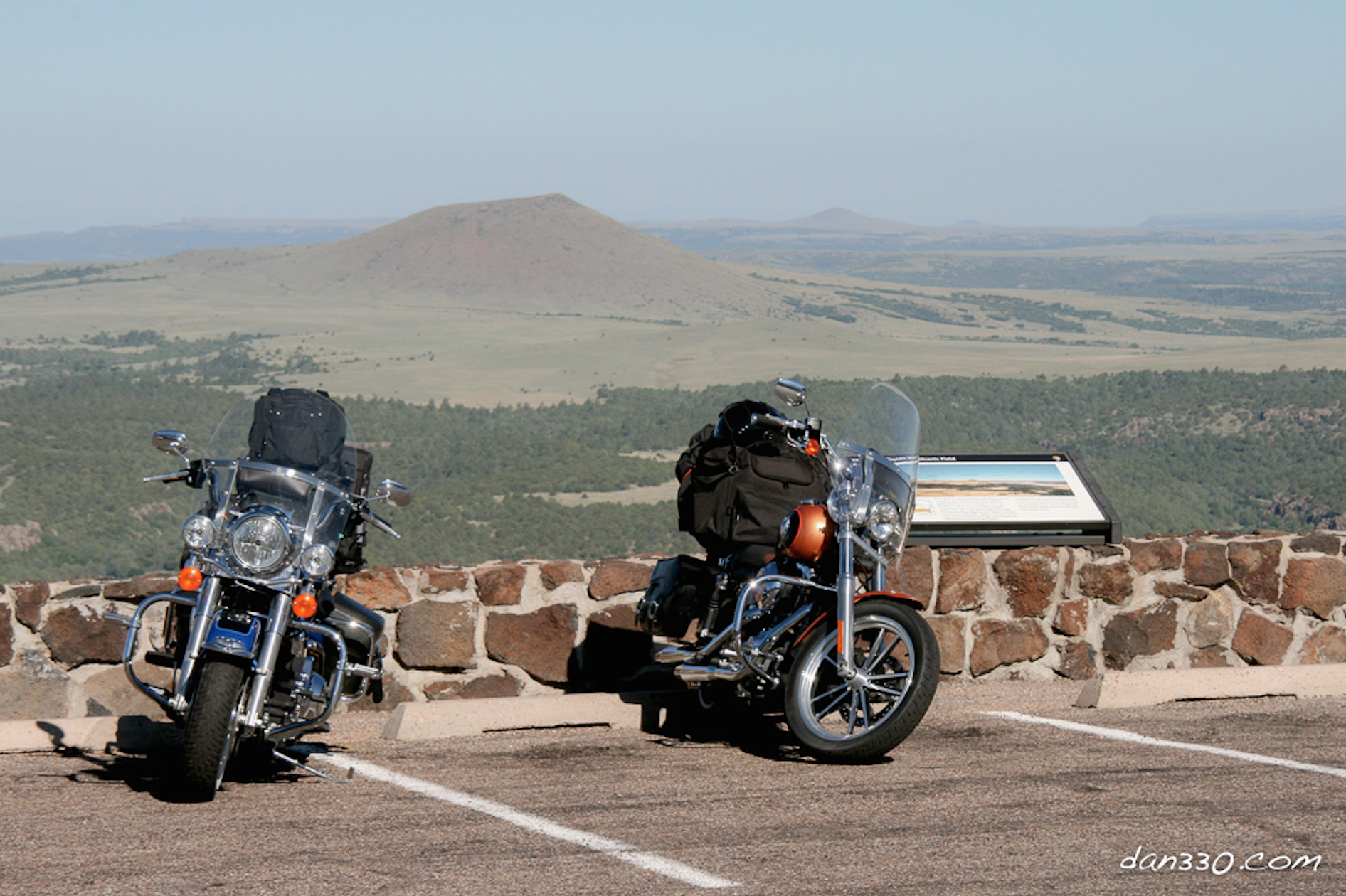 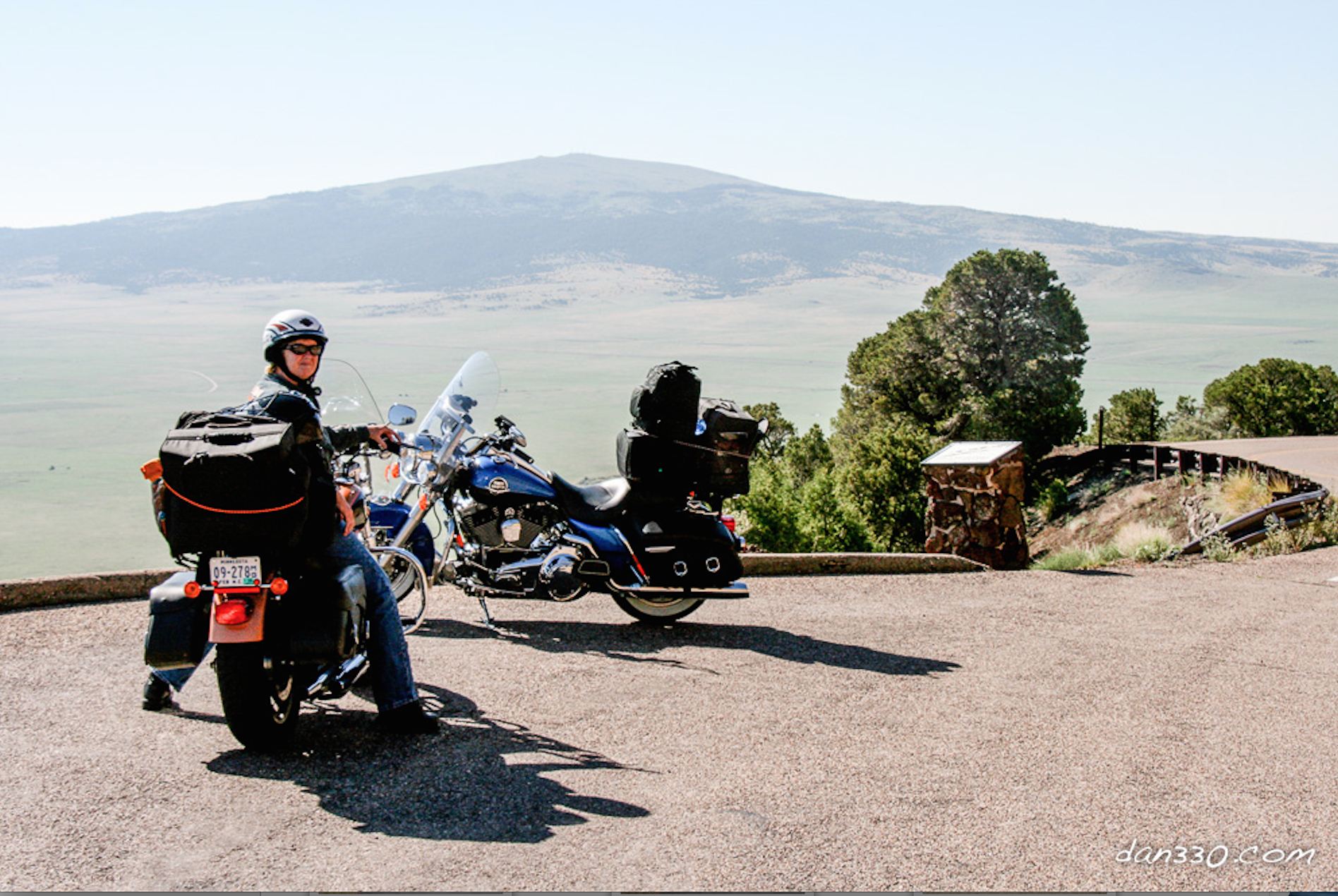 We stopped a couple of times for pictures because the views were great. This is really beautiful country. We met a couple at the parking lot at the top of the mountain who suggested another back road to take after we left the monument. Instead of heading back to highway 87 we continued north on 325 until we turned on 72 westbound to I-25 where we intercepted Highway 64 which took us to Taos. 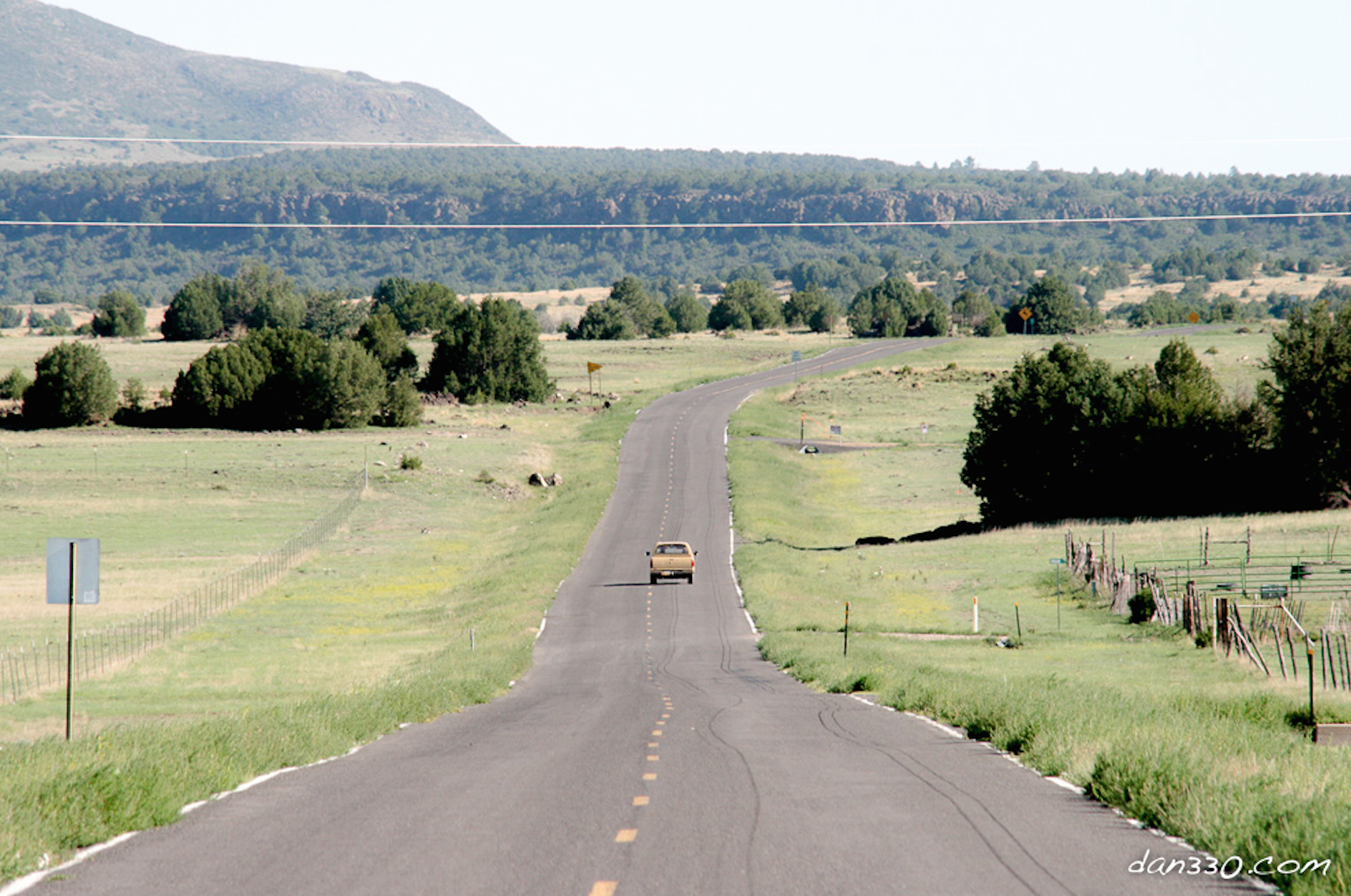 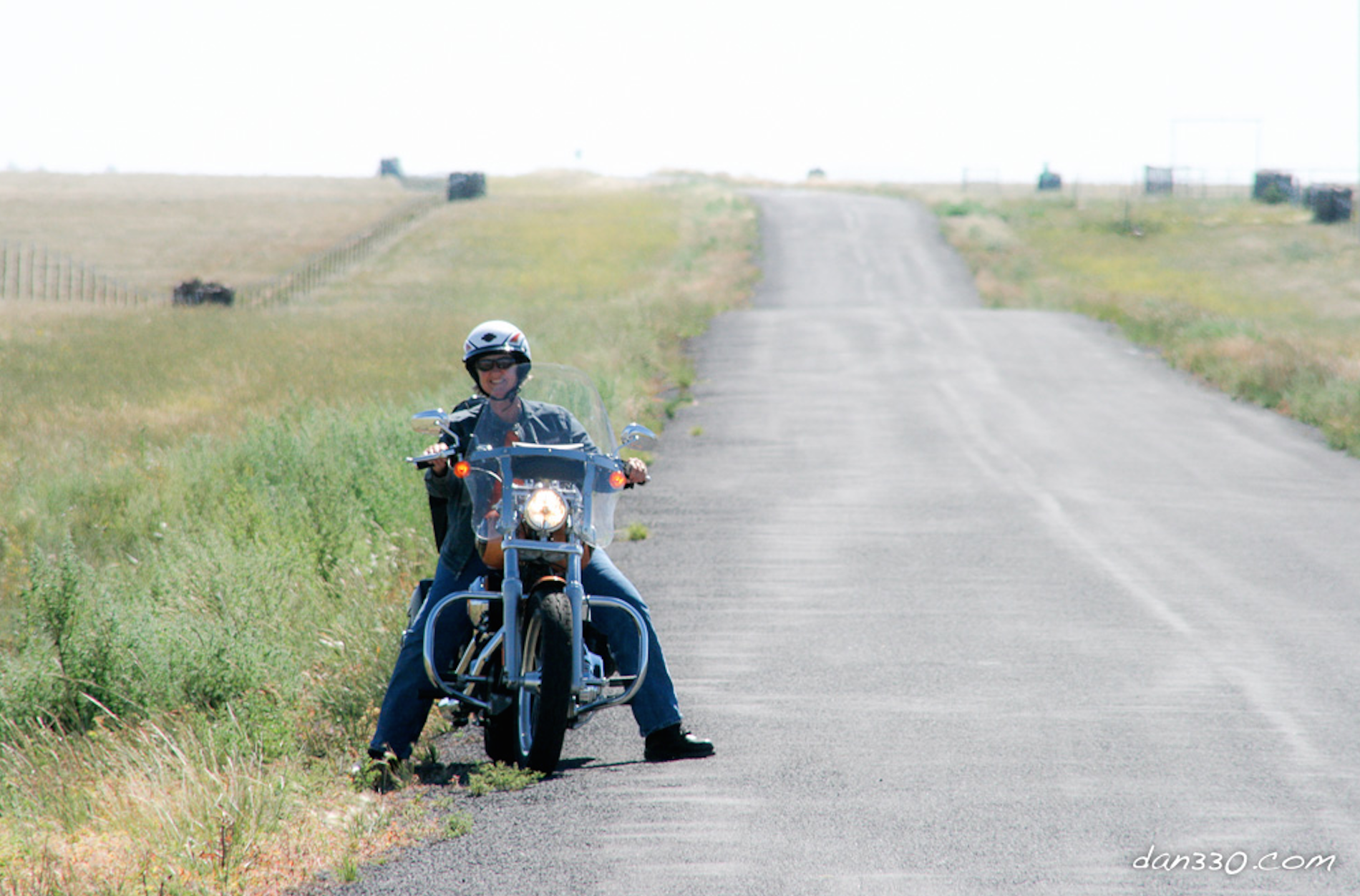 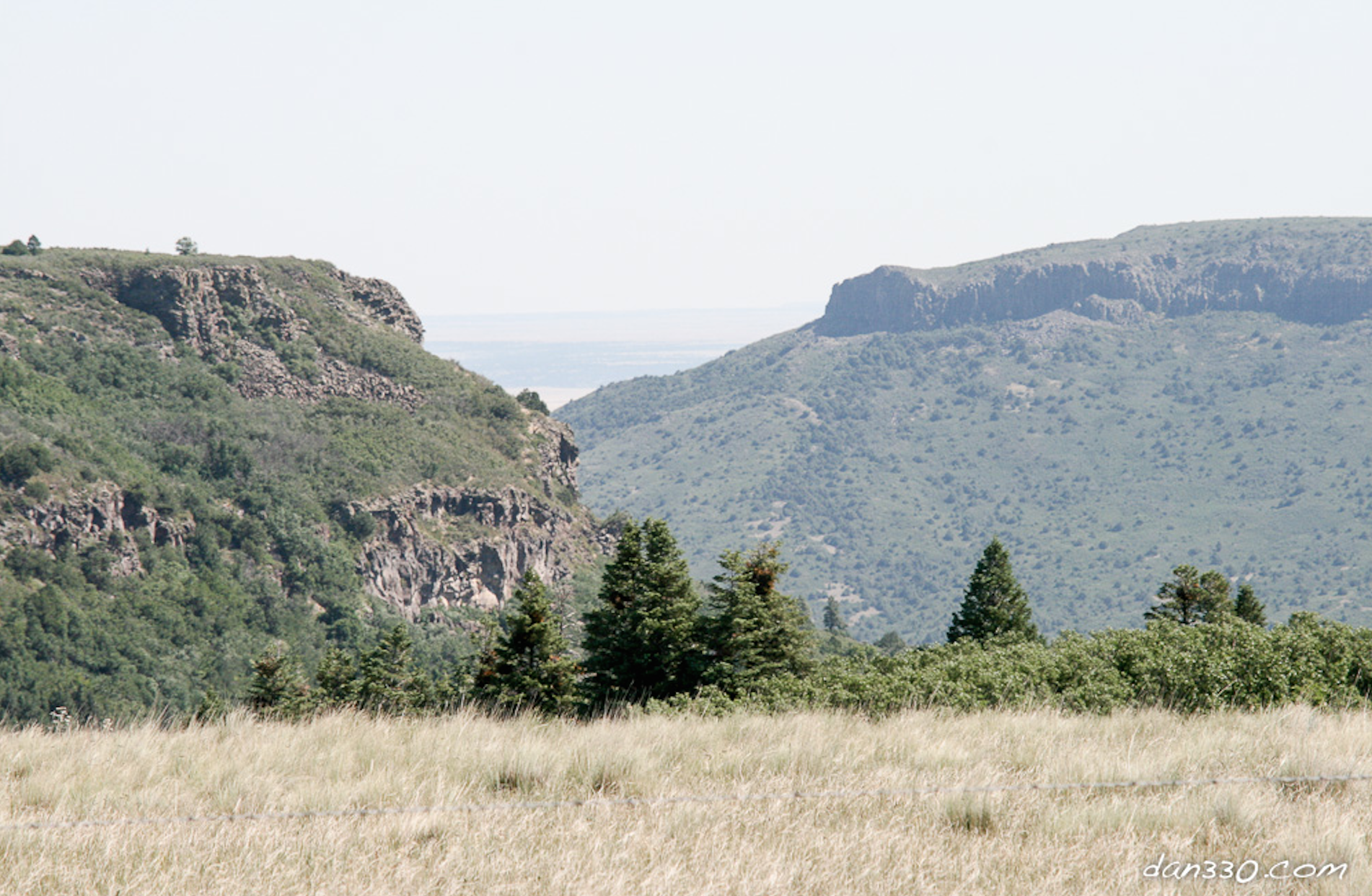 Get off the freeway. There is so much to see on the back roads of America. The extra time it may take to get somewhere will be well worth it.

If you are in this part New Mexico, this is a great rest stop where you can catch some views and the kids and run off some energy.

If you plan on visiting a few national parks in one year, consider buying a National Park Pass. It is easy to do at most parks and will save you money after your first few visits. We have a lifetime pass now that we are…well more experienced.

For more on our American National Parks series click HERE.