Living on the edge: Polar bears in Churchill on the decline

Last month I scratched one trip off my bucket list — a trip to Churchill, Manitoba, known as the “polar bear capital of the world.”

My interest in polar bears began when I saw my sister’s giant polar bear painting on her living room wall. For a few years we talked about going to Churchill to see the carnivorous Arctic creatures in the wild.

This fall, I had an opportunity I couldn’t resist, but sadly the timing wasn’t good for her. 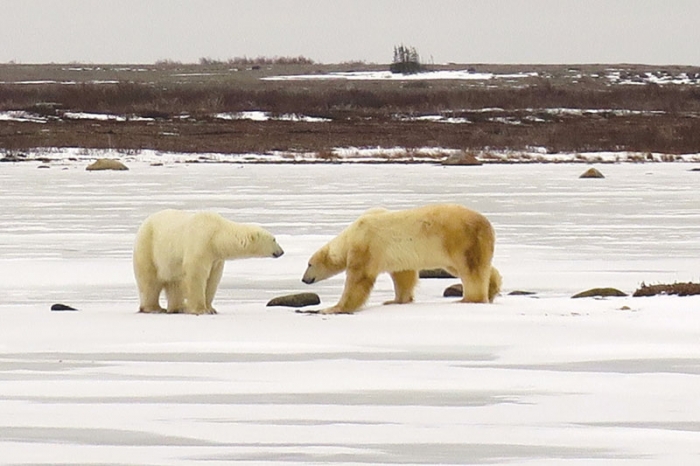 I flew to Winnipeg, the take-off point for flights to Churchill, and arrived a day early to see the Assiniboine Park Zoo’s new exhibit, “Journey to Churchill.” Watching the polar bears up close, swimming and somersaulting in a giant water tank, was a good preview.

The next day our group of 10 met up and flew north to Churchill, about a 1 3/4 hour flight, to see the big white bears, which can be up to 12 feet tall when they stand on their hind legs.

We left behind the rich green fields and woodlands for the barren brown tundra dotted with stunted trees and polar bears. Churchill, population 800, is a remote village located on a peninsula on the western side of Hudson Bay.

The area has about 900 polar bears, down from 1,200 just a few years ago, said Thuraya Weedon, head of Churchill Nature Tours.

To get an overview of the bears’ habitat along this part of Hudson Bay, we took a helicopter ride over the town and surrounding wilderness. The giant potato-chip-colored bears were almost indistinguishable from some of the rocks as they rested, but a few were lumbering around.

The next day we went out on a Great White Bear Tours vehicle to see the bears at close range. The vehicle has giant wheels, rides high above the ground and is windowed all around for great viewing and photography. 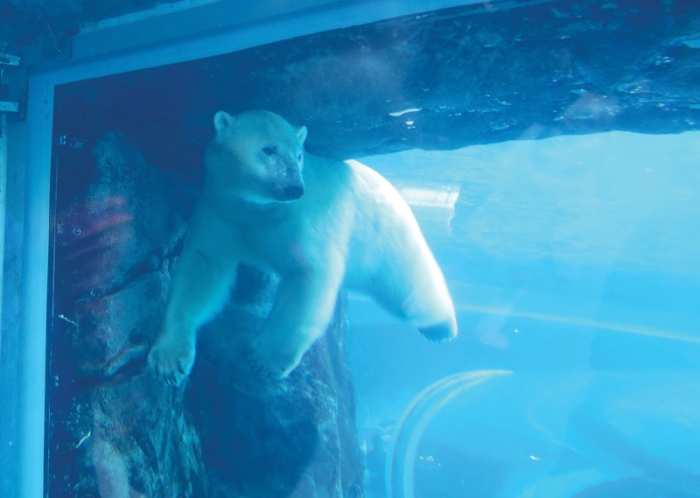 Our guide was Pat Rousseau, a retired park warden and wildlife biologist for the Canadian National Park Service and a walking encyclopedia about polar bears.

The land was flat with an occasional clump of windblown trees, and the ground had little snow cover, which was quite unusual for November.

We rode on what the locals called a road — bumpy and rutted but mandatory to protect the fragile tundra soil — and out to the open water of the bay.

Suddenly, we saw our first bear — and then another and another — probably about 30 that day — singly or in pairs ambling cross the tundra, curled up on a spot of snow to cool down out in the open or nestled in bushes. A few were “sparring” — preparing for the mating season, Rousseau said — and a handful had cubs with them.

We’d rush from one side of the tundra vehicle to the other or outside on the back platform to get the best view and the best photos. One bear came right up to our vehicle and nosed around the big tires. It was a fabulous sight, and we were mesmerized. 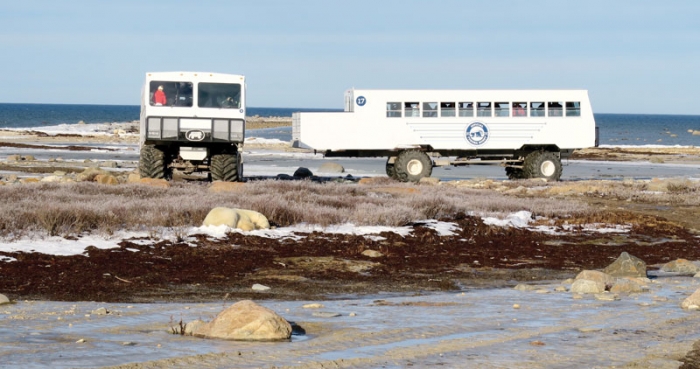 The weather was unseasonably warm, so I didn’t wear half the warm clothes I was advised to pack in case the temperature dropped to zero, more normal for mid-November.

The Hudson Bay sea ice has been forming later than usual in recent years due to climate change, so the bears have been gravitating to town looking for an easy meal.

A National Geographic report from 2011 said that since 1979, the sea ice the polar bears depend on has declined by 30 percent with summer ice melting earlier, and the winter freeze coming later. So the bears, which depend on ringed seals for food, have a longer fast through the extended summer and have less body fat; females give birth to fewer cubs and fewer of those survive.

Thinner sea ice shifts more with the wind, making longer calorie-burning swims for the bears as well. Sometimes they don’t make it and drown. A December 2016 report from the National Wildlife Federation confirms this trend is continuing and expresses great concern over the long-term survival of Hudson Bay’s polar bears. 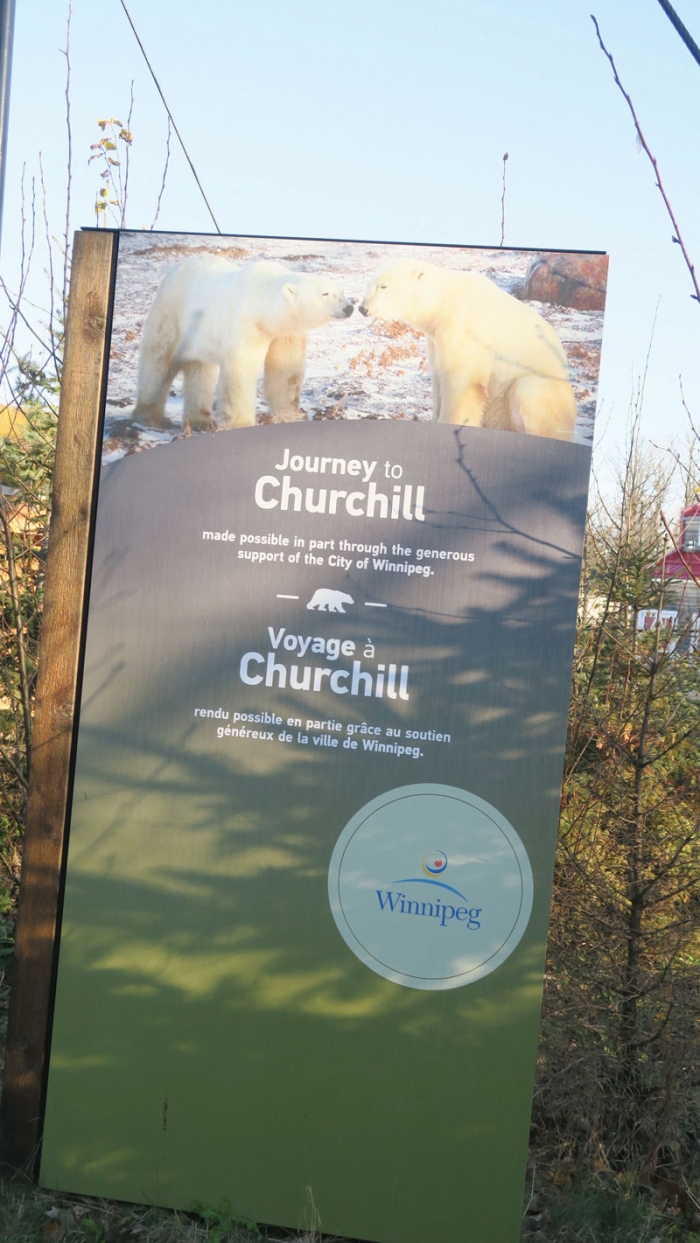 As we peered down at the bears, they looked so cute, but we knew they were dangerous.

“The bears are considered aggressive, and they have only one thing in mind — meat and skin for fat — and us, not berries,” Rousseau said. So Churchill has a polar bear patrol to keep the hungry critters away from town.

There was a time when  bears wandering too close to houses and stores were shot. Now, however, they are captured and put in the town’s “polar bear jail” before they have a chance to attack someone. From jail, they are shipped out to Hudson Bay when the ice starts forming and the bears can begin their annual hunt for seals. The bears used to spend most of their lives on the sea ice and return to land to give birth to their young. Now with the ice melting earlier in the summer, they are forced to spend more of their time on land.

We saw a couple of bears swimming way out in the bay, and we visited the “jail” to see the traps on display outside, but we weren’t allowed inside where as many as 20 bears might be detained.

While the bears were growing thin waiting for the ice to freeze, we weren’t short on calories ourselves. We ate three meals a day at Gypsy’s Bakery and Restaurant, which served a variety of homemade bakery goods, fresh salads and fruit, entrees and desserts, as well as bacon and eggs for breakfast. We always had great choices. Other tourist groups also ate in this friendly place. 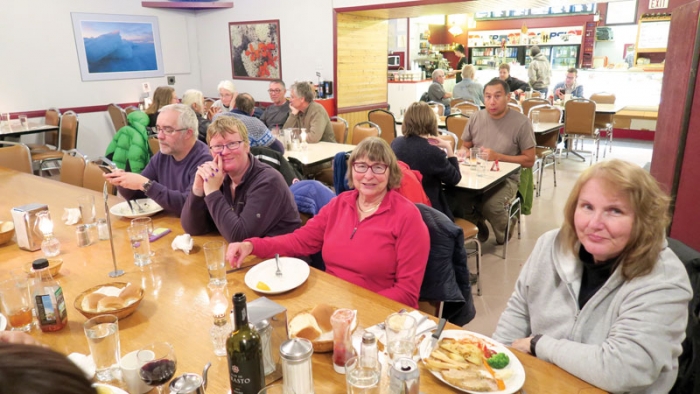 We spent our nights at the comfortable Aurora Inn. In spite of being in what seemed like the edge of the world, we had Internet services in our rooms and TVs that carried some American election-week news. 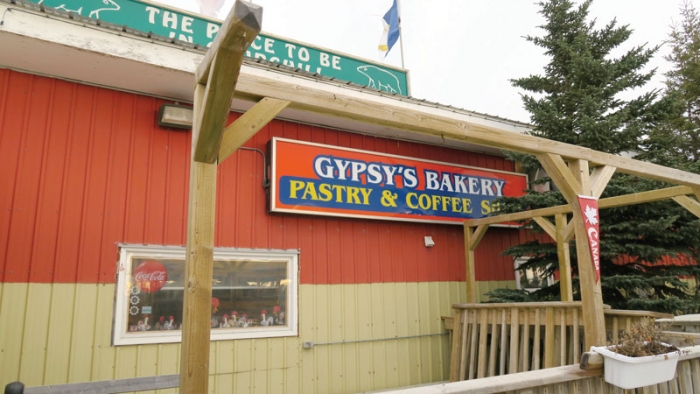 Sadly, it was too overcast to see the Northern Lights.

With warnings of bumping into polar bears in search of an easy meal, I didn’t walk around the town at night.

For a change of pace, we took a dog sled ride one day. The small, wiry, yapping dogs were raring to go. Dog sled racer and owner Dave Daley of Wapsuk Adventures shared some stories and told us we’d be doing his last dog sled ride until it snowed again. As it was, they had to do extensive shoveling to build up enough snow for our short ride on the icy track. 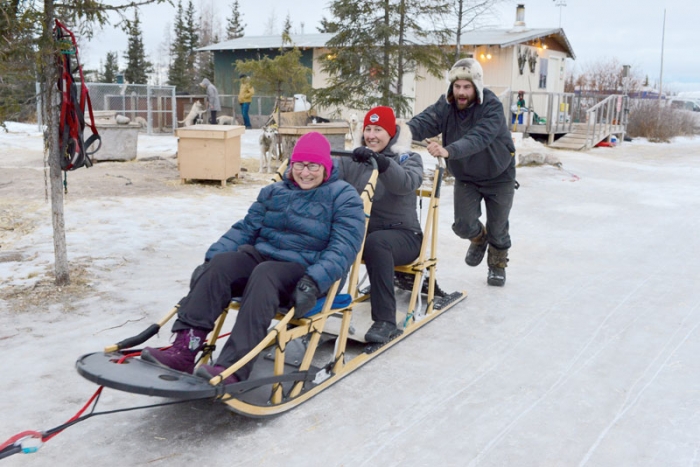 We did a second day out in the tundra vehicle and again, saw many polar bears and took many photos and videos. Seeing them was pretty amazing, and we had such a unique experience — once in a lifetime for most of us — and returned home with many wonderful photos and stories we shared with friends.

But all of us had a sense of fear, too, for the future of these giant white bears.